Let's take a moment, now that the constant flood of news information out of Japan has slowed down a bit, to briefly review what has happened at Fukushima Daiichi and look at some details being brought up by various media.. and by the "various media" I mean ERRORS and SUPPOSITIONS in the media.

The first event that occurred at Fukushima Daiichi was an earthquake, which caused all three reactors that were operating and producing power for the grid to full scram and trip their turbine throttle valves. Emergency diesel generators start instantly and are on the local plant grid instantly on the receipt of such signals, to power instrumentation and control (I&C) systems that use remote indications and remote controls in the control room to operate the reactor plant, as well as to power many varied electric pumps and valves. Although a scram from full power like this can lead to a brief relief valve lift, it isn't an accident causing event.

The next thing that happened was the part of this natural disaster that has caused the most damage; a tsunami of truly historic size and power that has never been seen in Japan in recorded history. This led to what essentially amounts to the dreaded SBO DBA sequence (Station Blackout - Design Basis Accident) which in the most severe postulated cases leads directly to core melt. In the scenarios run on computer simulations for various types of containments (and we'll talk about that in a moment) and various power ratings of reactors in which operator actions are totally ineffective or else wherein there are no operator actions the result is always core melt in somewhere between 11 and 13 hours and in those cases the containment fails around one hour after that.

This was not entirely the case at Fukushima Daiichi; the operators have battled with the plants and systems at every turn for almost the whole time. Furthermore those SBO sequences don't include a period of time, as at all three plants, where decay heat is being removed by normal systems -- these worst case scenarios occur with a total loss of all AC power from 100% reactor power. There was time to remove enough decay heat, apparently, at Fukushima Daiichi's three operating plants to hold off the time until very serious core damage occurred for quite a while. We might look back in our timeline to the hydrogen explosions at No. 1 and No. 3, and the audible explosion in the suppression chamber at No. 2 to guess about when the core damage was occurring most severely.

So what is all this about "containment," and "suppression chambers?" Containment put simply is the system of barriers that prevents fuel and fission products from entering the environment. The first barrier is the fuel itself; if that fails, the radioactive material must then somehow get out of the reactor vessel and / or the associated piping that hasn't been shut off by valves. This layer is actually referred to as the primary coolant system and is really the primary barrier. Next is the secondary barrier, meant to contain the effects of a primary coolant system failure. Just what that means -- the amount of pressure and heat and radioactivity, or in other words the total amount of energy to be absorbed -- has varied over time.

In many early reactor plants, the common sight and one that captivated public attention was a massive vapor containment sphere. A number of early plants used this, including the Dresden Nuclear Power Station, which was America's first large boiling water commercial power station. Here are some views. First we see a pre-construction elevation by Bechtel Corporation of the final plant layout. 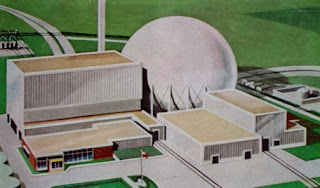 This is the second overall layout originally conceived for the plant; initially the turbine generator was to have been included inside the giant sphere seen in the overhead view. And we do mean giant... the sphere for this plant was one of the largest ever built, measuring 190 feet across and built of steel plate over an inch thick. Below, also from the APRA collection is a press photo of the dedication of the plant on October 13, 1960. 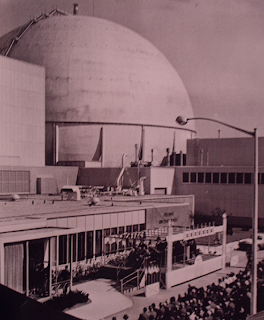 This massive sphere was intended to contain the effects of a total release of all the energy in the primary coolant should a rupture occur, and could also contain the pressure pulse of the maximum conceived hydrogen burn; the design pressure was 29.5 pounds per square inch but the test pressure of the structure was 37 psig. The maximum credible fast leak, with zirc-water reaction of 25% of all zirc in the primary would have resulted in a sphere pressure of 31 psig; if the secondary (this was a dual-cycle boiling water plant) steam were released due to missile damage from a severe primary rupture, internal pressure would have been 34 psig.

As an aside, originally these large structures, extremely expensive and complicated ot build, were also used at pressurized water reactor plants. Below is an external view of Yankee Atomic Electric Company's plant at Rowe, Massachusetts which first went online in November, 1960 - one month after Dresden, pictured above. 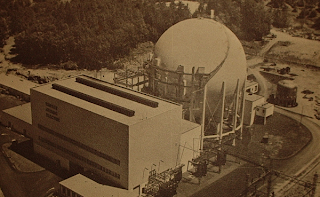 Whereas the sphere built by Bechtel and GE for the 626 MWt Dresden was 190 feet in diameter and had an internal volume of 3.6 million cubic feet, the sphere for the Westinghouse 392 MWt pressurized water plant at Yankee was 125 feet in diameter with a volume of just over 1 million cubic feet. Design pressure was 35 lbs. Below from the same brochure in the APRA collection whose cover is shown above is the internal view of the sphere. Note the heavy concrete radiation shield, or biological shield, built around the reactor but inside the sphere. 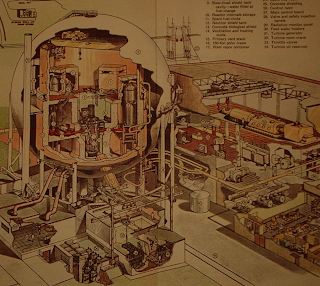 Of particular interest in this illustration is the angled chute seen leading down from the vapor containment sphere, into a building on the ground in the lowest foreground part of the illustration. This is the spent fuel pool facility -- completely external to the reactor building and not subject to any transients, incidents or accidents occurring therein. This is particularly interesting to note when compared to the design seen at Fukushima Daiichi and in fact used at many, many other plants worldwide. Many early plants' spent fuel was located outside the primary containment.

Getting back to boiling water reactors... It began to appear, with the high cost of reactor plants in general, but the (at the time, apparently) better cost and return figures of the boiling water reactors that the cost could be further improved if the containment were simplified. The answer came from an unlikely source; ALCO products.

ALCO Products was an early reactor vendor, who exited the market in 1962. This was the former American Locomotive Company, which had diversified after the end of the war. ALCO had built a plant called the APPR or Army Package Power Reactor for the US Army and the AEC at Fort Belvoir, Virginia as a prototype; however, true remote siting of the plants as designed would seem to preclude large and heavy reactor buildings with thick heavy walls or large spheres. For the follow-on plant, APPR-2 or later known as SM-1A at Fort Greely, Alaska, ALCO and its contractor designed a novel type of containment that did not need to hold against such maximum accident design pressures since it would use a pool of water to quench, or suppress, the steam from such an accident. With the use of this pool, the overall secondary containment could be made lighter and less expensive. General Electric adopted this concept for boiling water reactors (the ALCO plants were all pressurized water) and first used it at Humboldt Bay. Below is a rough representation of the early style of vapor suppression containment such as in the ALCO plants and Humboldt Bay. 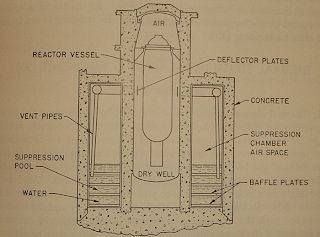 This style of design had its drawbacks, and after interim designs of BWR reactor plants a new toroid style chamber was adopted, piped to a "drywell" that fully enclosed the reactor vessel. This drywell / suppression chamber structure was then surrounded by a heavy concrete biological shield structure, and then finally by a reactor building. Below, seen before on this site but shown here for full continuity are some illustrations of reactor - dry well - suppression chamber structures and the containment and reactor building. 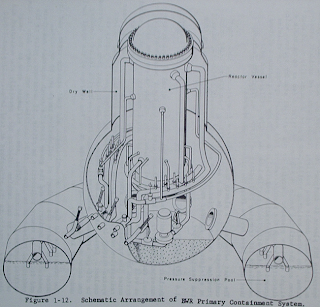 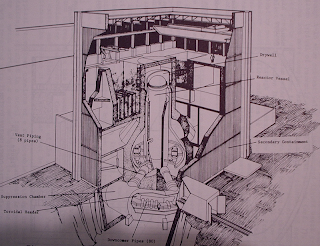 In the design above, there are by definition two "containments," both a primary and a secondary. The primary is the dry well surrounding the reactor; the secondary is the heavy concrete structure poured around the drywell and which is enclosed by the reactor building constructed outside of, and on top of, the secondary containment.

Very new BWR plants are different, and include a third pressure-tight containment barrier. These plants don't look like large windowless office buildings but rather look like large cylinders... at least in terms of the structural details of the containment. (Some plants have external shrouding around the containment for the sake of appearance. One such plant is Ginna; this slightly overhead view shows that what looks from ground level like a large square reactor building is really a set of false walls around a domed containment. Ginna is a PWR plant, but this is possible anywhere.) 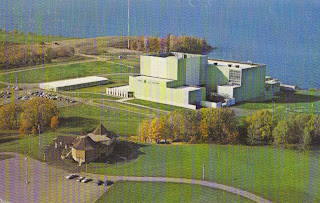 Now we have a few historical and structural details, for background, on containment structure. These will become more and more discussed in far greater detail in the press as it begins to go over how it was possible for all the releases at Fukushima Daiichi to occur. We have much more information than this at hand, naturally, and will respond to press reports (and hysteria, and inaccuracy) as necessary.