Nuclear Energy in the Forefront.. and Public Information

This blog has been reporting for some time now on the renaissance in nuclear energy in this country, which has really ridden along the crest of two phenomenon: The increasing belief in carbon-driven global warming, which nuclear power doesn't exacerbate, and the desire to reduce our dependence on foreign oil resources, which nuclear power doesn't need. Many news outlets around the country have had, in the last year, more articles on nuclear energy than they have since the 1980's and many press releases have been made by various government agencies on licensing, funding, design consideration and more. Nuclear energy had been very carefully moving its way back to the forefront of our social attention, just as it did during the end of the 50's and through the 60's in a positive way and then into the 70's and 80's as environmental protesters got the helm of the large news media and took over its message vis a vis nuclear energy.

Of course now no one can for long ignore the disaster of the earthquake and tsunami in Japan, and the attendant accident at Fukushima Daiichi nuclear generating station is a large part of this coverage -- accurate or not.

There is much conflict about what information was available to anyone prior to the disaster and accident. Some say that no information was ever provided, but clearly we can prove (and have proven) that it was, while others say that no good information is coming out now although again surely anyone following this blog knows that this is absolutely not the case.

There is something the US utility companies can learn from this, and act on right now. They can begin to stop trying to hide their nuclear generating assets on their websites and press releases and annual reports and the like and begin to give lots of information to the public, NOW, or else be accused of trying to hide information.

Here at APRA we have a large collection of material that was originally provided by the utility companies on nuclear energy. These take the form of brochures, usually - larger, smaller, more colorful, less colorful... but they have some common points. They were FREE to the public. They were offered to the public either by mail or else at the VISITOR CENTERS that most of the utility companies used to have by new nuclear plants. Perhaps the most advanced of these ever built is actually still in existence, overlooking Oconee Nuclear Station, Seneca, South Carolina. Here is a post card view of this visitor center in our collection: 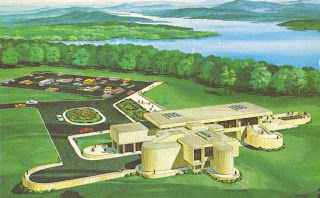 Furthermore, we also have a number of brochures here that outline various precautions and procedures, and one that dictates the emergency actions to be taken along with a great deal of solid information on radiation, contamination and evacuation that was mailed to all residents within the evacution zone (ten mile radius) of the Maine Yankee station.

It seems obvious that now is the time for the nuclear utilities to get out in front. Begin to issue information, not in a panicked way... Be thorough, but timely, and issue informative pamphlets. Re-open visitor centers. This is especially important for utilities considering building new plants. It's vitally necessary to get good information out from official sources to an already over-informed and usually misinformed public.

It used to be the normal way of doing business.