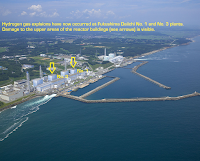 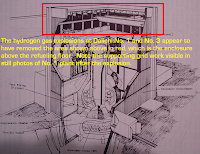 The top photo is a TEPCO file photo; the damage is visible in live news feeds and video but I've indicated on this photo what is seen in these. Television cameras are sited to the left of this photo, so that on television No. 1 plant is on the left of the screen with the plants spread across the screen left to right.

The lower photo is from our library and comes from WASH-1250 which is an unpublished draft report on reactor safety that eventually led to the well known Reactor Safety Study, WASH-1400. The illustration is of a typical earlier GE boiling water reactor plant's reactor building.

The damage to Daiichi No. 3 building appears worse than that to No. 1, and the Japanese Government is reporting that one wall of the building has collapsed. Radiation monitoring is underway to determine levels of release, if any. Cabinet Secretary Edano has given a very brief press conference but the initial response to the explosion is still underway and the condition reports are still very preliminary.

TEPCO is reporting stable primary plant pressure in Daiichi No. 3.