In a previous post we showed the design of, and purpose for, the Pressure Suppression Chamber Feature of more modern BWR or Boiling Water Reactors such as those found at Fukushima Daiichi nuclear station.

For further perspective, we will show some further illustrations. These are taken from another official AEC publication in the APRA library: WASH-1082 / Current Status & Future Technical & Economic Potential of Light Water Reactors / March 1968.

Below, a better perspective of the relation of the drywell and the suppression chamber. Note the reactor vessel totally enclosed by the drywell. Many pipes are seen leading to and from the reactor -- necessary to get water in, and steam out, as well as being used for other functions. 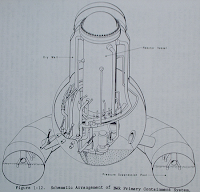 Next we see a view of the drywell and suppression chamber under construction at the Nine Mile Point plant, a GE 1850 MWt / 621 MWe plant whose construction permit was issued in 1965, making it slightly older than the Fukushima plants. This plant is located near Oswego, New York and is certainly among the longest lived and most successful nuclear plants in the United States. 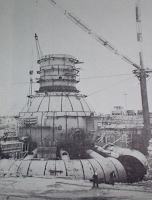 Now we will show the Oyster Creek plant under construction; this is another GE BWR of the same vintage as the one shown previously. We can see the size of the drywell compared to the turbine building being built behind it. Little of the actual reactor building has been constructed yet in this picture.

Looking at the above photo and having seen the illustrations of the Fukushima plants from the air, the relation of the reactor building and turbine building is seen to be practically identical. We can judge the rough scale by the workers visible in the second picture near the toroidal suppression chamber. Finally we again show an old view of the Nine Mile Point visitor center scale model of the plant, for perspective. The structure of the reactor building is clearly visible.

-Written by Will Davis for ATOMIC POWER REVIEW 3/14/2011. Do not copy or quote without permission or credit.
Posted by Will Davis at 11:40 PM