Many people have seen drawings of the containments at Fukushima Daiichi, and some terms are starting to get tossed around in the press. Further, some sharp eyed readers have noticed that the cross sectional views for Fukushima Daiichi No. 6 are different from all the others... and that's right! No. 6 has a Mk II containment, while all of the rest have the Mk I containment.

What? Well, the earliest reactor plants of all kinds had really no standardized containment design. For GE boiling water reactors, the earliest application of the style of containment we're seeing was used at Humboldt Bay and from there the style with the toroidal suppression chamber was developed. We've detailed that in a previous post...

The containment with the toroidal suppression pool at the bottom is known as the Mark I or "Mk I" containment. That by no means indicates that these are standardized in all facets; some plants have larger dry wells, some smaller. Some reactor buildings have more floors than others. Some have doors that seal off different levels, some don't. Some have multiple entries into the reactor building, others fewer. Some have a larger volume than others. What is "standard" then on the first range of boiling water plants is the use of the basic design we've seen so often on this blog.. the use of a reactor vessel mounted high up in a drywell, below which is a suppression chamber formed from a toroid and connected by pipes to the drywell. Here, from WASH-1052 is one further representation of the Mk I containment. 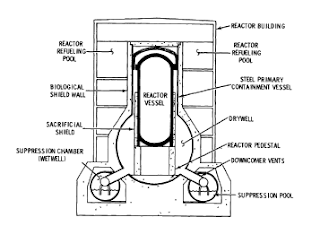 Here is an earlier post where we showed what the dry well looks like under construction at a couple of plants, and in a large cutaway model:

This was not the end of the line for design changes. A superior design was developed which had more internal volume, generally, and a more solid construction. This is the Mk II containment which dispenses with the toroid and instead incorporates a suppression pool as part of the building itself. Below is an illustration of a typical BWR Mk II containment, from WASH-1052. 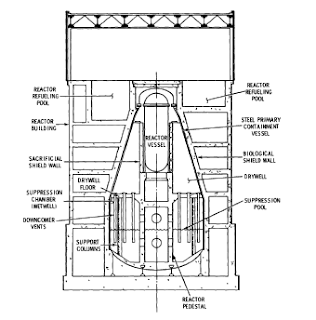 Of all the plants at Fukushima Daiichi, only No. 6 is new enough to have been built with the Mk II containment design. All the rest are variations on the Mk I design.

Eventually a further design was evolved, which doesn't use a reactor building constructed on top of and on the sides of the secondary containment. Instead it uses a large cylindrical, dome-topped vapor enclosure very like that used on PWR or pressurized water reactors for many years. This is the Mk III containment. Below, again, from WASH-1052 is a BWR Mk III containment. None of the plants involved have this style, by the way. 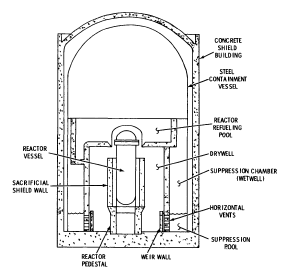 Now that this post is made, readers have seen not only the whole genesis of the "suppression chamber" concept of containment, but also know where the affected plants at Fukushima Daiichi fit in the overall design line. Note that on the Mk III there is no chance that such devastating hydrogen explosion damage can occur; on the similarly designed Three Mile Island reactor containment (a pressurized water reactor is inside) around 700 pounds worth of radiolytic hydrogen burned and the structure was not damaged. Pressure rose to over 25 lbs / sq in but the structure contained it, as designed. This is exactly why the Mk III is designed as it is, and this is fitted to all new BWR plants.