Believe it or not, it's time for the TWO HUNDREDTH Carnival of Nuclear Energy!  It seems like only yesterday that Carnival 100 was posted.  Since then, we've had additions to the roll of regular contributors as well as losses, but the quality of content has remained top notch.

You'll get to see that quality for yourself after you play the usual game here at Atomic Power Review when there's a Carnival ... you have to guess "What is this?" 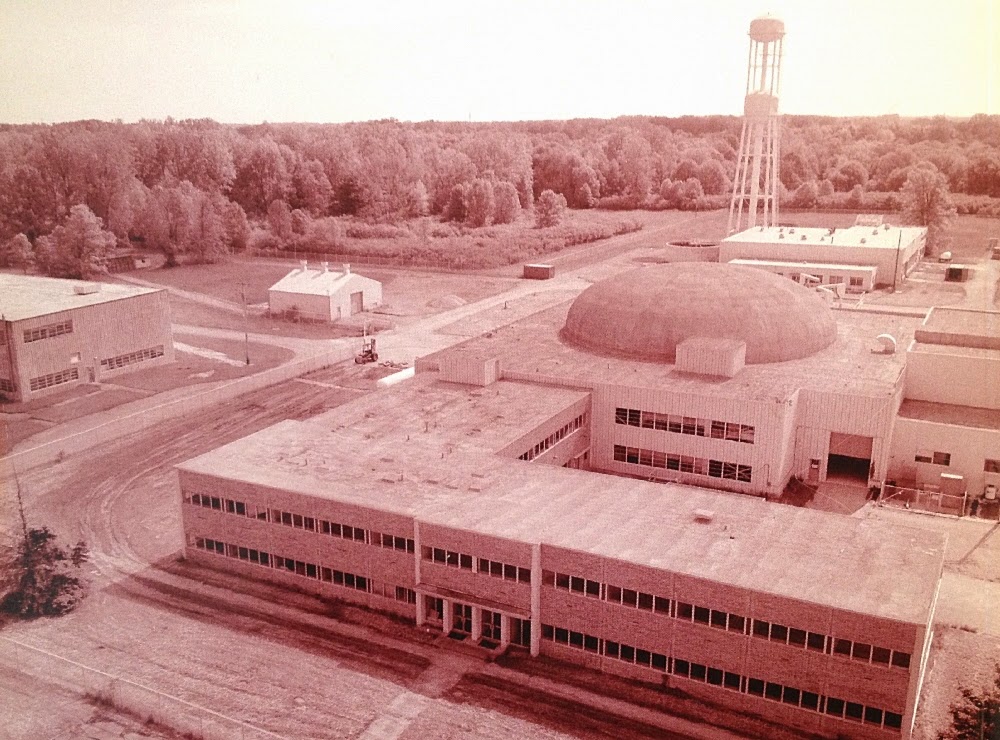 You can tell me what this facility is, or else who owned and operated it, or maybe even just where it is.  Or should I say "was"... because this facility is completely decommissioned now and there's no trace of it.  I probably don't need to tell you that this facility does indeed contain a reactor, and it's not just the run of the mill test reactor developing only a few watts of power.  Answer after the Carnival!

"Fukushima Three Years Later" by Will Davis
An overview of the situation and developments at Fukushima Daiichi, three years after the Great Tohoku Earthquake and Tsunami.  Ongoing recovery efforts in and around the site, safety enhancements for existing reactor fleets, prospects for restarting reactors in Japan.

"Three years of available lessons from Fukushima" by Rod Adams
The events 3 years ago at Fukushima Daiichi offer challenging but necessary lessons about the commercial use of nuclear energy.  A conversation to document some of the lessons from the accident.

Fukushima Third Anniversary - The Positive and the Negative.  Les Corrice takes a look at reporting on the third anniversary of the Fukushima Daiichi accident, with an emphasis on who has reported in a positive and in a negative vein.  Corrice examines the common negative themes in reporting; he also notes that there was positive reporting this year whereas last year there was none.

Doses of radiation that are lower than about 700 mGy/yr are more likely to reduce cancer incidence and increase life span than to decrease it. In other words, moderate radiation doses are good for you in the same way as moderate exercise is good for you.
The basis for this economy-altering assertion is documented in Dr. Jerry Cuttler’s recent paper titled Remedy for Radiation fear — discard the Politicized sciencewhich is available as a pre=press article from Dose Response.

A Democracy Now segment featuring Ralph Nader and starting with a discussion on climate change rapidly turned into an antinuclear rant. Rod does some fact checking to point out several misinformed statements.

Activists planned to remember the Fukushima meltdowns by "unplugging" nuclear power from the grid.  Actually, they unplugged themselves by turning off lights and not playing video games--for a day.

Local nuclear opponents want all of Vermont Yankee's spent fuel moved to dry cask storage as soon as possible.  However, they said they will sue Entergy if the company uses decommissioning fund money to move fuel from the fuel pool.

Margaret attended the Nuclear Regulatory Commission's Regulatory Information Conference (RIC) in Washington D.C., and reports here on the speeches of the NRC Chairman and two of its commissioners.

China is back to raising its nuclear energy targets for 2020. Perhaps heading to 70-80GW instead of 58 GW

Japan might restart up to 10 reactors per year. About 35 reactors operational in 2019

Canada's nuclear regulators are performance based instead of the US NRC rules based. The US NRC is based on rules for light water reactors of the late 1960s. Canada could allow the new Terrestrial Energy Molten salt reactor to be operational by 2020.

Fighting carbon with electricity: bringing the Third Electrification to Ontario

While Paris France chokes on automobile exhaust, Steve Aplin of Canadian Energy Issues wonders how quickly the worldwide automobile fleet could be replaced with all- or partially-electric cars. The quicker that happens, the quicker mankind can shift to a truly sustainable economy. That shift, which Steve calls The Third Electrification, would be as profound and revolutionary as the advent of the electricity grid was in the Twentieth Century.

Radioactive Fukushima Waters Arrive At West Coast Of America
Presenters at the annual Ocean Sciences Meeting in Honolulu recently said ocean water containing dissolved radionuclides from Fukushima’s crippled nuclear reactors has reached the west coast of North America. However, levels of radioactivity are so low by the time they leave Japan that there is no concern whatsoever that radioactivity from Fukushima could ever harm America.


The Economics of Nuclear -- a new website by Rick Maltese


The prevailing view by the anti-nuclear crowd is that no energy source sucks up the billions of dollars like the building of nuclear plants. The problem is that intermittent energy sources like wind and solar should not be compared to baseload energy sources like nuclear. Nuclear energy runs 24/7 daily uninterrupted for years at a time. The bright side of nuclear needs to be categorized in a class by itself.

Non-emitting baseload energy, which of course eliminates coal and natural gas, is becoming more scarce in the US and other countries that favor an "all of the above" energy strategy that inevitably alienates nuclear energy because it supposedly is too expensive.


The benefits to the environment surpass that of wind and solar by virtue of it's ability to replace dirty baseload energy sources like coal and natural gas. Besides, nuclear plants provide a steady profit after the first ten years especially when competing energy sources are on an equal playing field.

That's it for this week's entries.  All that's left is to tell you what's shown in that photo above.

What you see in the photo is what used to be the NASA Plum Brook Reactor Facility, which was located in Ohio on a reservation about three miles south of Sandusky.  The main feature of the facility was the test reactor, which carried AEC license TR-3, and which was located inside the containment seen near the center of the photo surrounded by various support and administration buildings.  The facility also contained the MUR or Mock Up Reactor, a small zero-power test reactor.

NASA has published an excellent monograph volume on this facility which covers complete history of the site from its days long before nuclear energy, through the reactor facility days in the early 1960's, through early decommissioning activities in 2004.  This is called "NASA's Nuclear Frontier:  The Plum Brook Reactor Facility," by Mark D. Bowles and Robert S. Arrighi, and which was published by NASA as its "Monographs in Aerospace History No. 33" in August 2004 with publication number SP-2004-4533.  The book gives great detail of the test facilities - if anyone interested in test reactors wishes only one book on his or her shelf about test reactors, this would be a top choice.  The photo you saw is from the back cover of this well written book.

The Plum Brook reactor was, quite unusually, entirely designed by staff working for NASA; the company did not purchase an "off the shelf" design of test reactor, nor did it contract to an established vendor for test reactors (such as Westinghouse, ACF, American Standard, etc.)   The reactor had an exceedingly high output for test reactors of the day -- 60 MW -- and required, according to the official NASA monograph a million gallons of water a day which was pumped in from Lake Erie through underground piping.  The vessel for this reactor was shipped in by rail and was manufactured by Struthers-Wells (now a part of Babcock Power) in Pennsylvania.  The fuel, which could be described as generally of MTR type (which is plate type fuel arranged in a stack, with water channel spacing between plates and surrounded by a box structure), and which was enriched to 93% was fabricated by Sylvania-Corning Nuclear Corporation.  According to SYLCOR records in my collection, the company supplied to NASA 270 actual and 27 dummy fuel elements; the material was uranium-aluminum fuel with aluminum clad, with 18 plates per element.  The elements measured 3 inches by 3 inches by 42 inches.

(Interestingly, SYLCOR at this time was offering two kinds of completely standard nuclear fuel in 18 plate 3 by 3 inch design, with either curved or flat fuel plates but with a length of 34-3/8 inches.  The model for the flat design was A-1891-F, while that for the curved was A-1891-C, according to the SYLCOR Standard Fuel guide.  However, SYLCOR frequently manufactured fuel similar to these designs but customized in either element length, or enrichment percentage, or both.  SYLCOR proudly advertised itself as "The World's First Nuclear Fuel Company" and was the first to offer to the trade a line of standard reactor fuel elements.)

The facility was shut down for good and defueled in 1973; decommissioning took many years after this.  Here are some interesting links:

So Ohio has actually hosted a couple of historic reactors from the early days of nuclear energy - the organic cooled and moderated power reactor at Piqua Ohio, and the Plum Brook reactor we've seen and discussed briefly here.  Let me know in the comments if you guessed what the photo was!