It's time for the 195th Carnival of Nuclear Energy!  Every week, the Carnival appears at a different blog and showcases the best English-language, pro-nuclear bloggers and authors the world over.

Before we get to the entries it's customary at Atomic Power Review to have a guessing game.  So, take a look at this photo and tell me ... "What is this?" 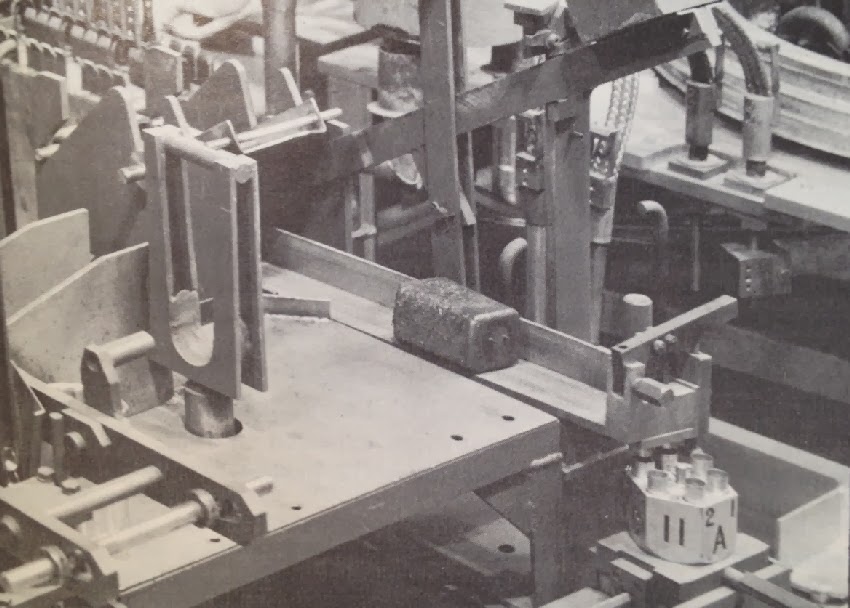 You can click on the photo to enlarge it.  The real subject of the photo is the dark object near the center, sitting on what looks like an angle-iron shaped tray or slide.  The object is oblong.  You could also tell me what the photo is generally or even (perhaps) where it was taken.  Or what the machine is that we're looking at.  Yes, of course this is nuclear related, and no, I really don't have a good hint for this one.  The answer, and more, after the Carnival entries!

Nuclear Power and Earthquakes - A Contribution to the Dialogue

With the interest in earthquakes and nuclear power plants being so important, and especially so in the decisions on restarting the shuttered nuclear power plants in Japan, Gail Marcus reports in Nuke Power Talk on a paper analyzing the faults around the Tsuruga plant in Japan. The paper not only explains the geological characteristics at that site, but in so doing, lays out some of the major factors considered in arriving at their conclusion, thus providing a useful tutorial for those of us who need to understand more about earthquakes and how the probability of seismic events is assessed.

Why did a major pension fund just decide to invest hundreds of millions more dollars into an Ontario nuclear plant? Because that plant, being the biggest clean energy producer in the western hemisphere, makes billions of dollars worth of electricity every year. It does so by selling its electricity at a cheaper price than almost every other source, which makes it an enormously valuable public asset. As Steve Aplin of Canadian Energy Issues points out, this offends supporters of competing electricity sources that are not only more expensive but come with heavy carbon emissions. Well, boo hoo for them.

South Korean Nuclear Power - Are the Dark Times Over?

At ANS Cafe, Will Davis examines the recent very public setbacks experienced by the nuclear energy program in South Korea, and takes a look at how the program is coming out of troubling times with a new mindset (and new scrutiny) and is already checking off successes.

Is fracking all it's fracked up to be?

Angwin describes a Dartmouth engineering school seminar which echoes her own conclusion that low prices for shale gas are part of a transient bubble. They are not the new world order.

Gas Pipelines and Fees.  Both are on their way.

Angwin notes Vermont's plans to tax gas pipelines to fill the Clean Energy Development Fund. Vermont Yankee had been forced to pay tens of millions into that fund. Now, the Vermont administration is looking for new sources of funding for their favorite renewable projects.

Is there Fukushima Radiation on the US West Coast?

Les Corrice presents a summary of the contamination issues relative to the North American Pacific Coast.  As of February, 2014, no Fukushima isotopes had been detected.

Concern is mounting in the Obama administration over a growing number of nuclear reactors that are being closed prematurely, for no reason other than a failure of the energy market structure in the United States.  These threaten America's ability to achieve any emissions goals in the future.

That's it for this week's entries.  Now all that's left is to let you know what exactly that non-identifiable object was and why it was sitting on that highly obscure contraption.

While looking for something else, I stumbled across this photo in the 1964 edition of the Atomic Energy Commission Annual Report to Congress.  I decided that it would make a fun guessing game photo.  Here is the original caption for the picture:

"EBR-2 Fuel.  The AEC's Experimental Breeder Reactor No. 2 (EBR-2) at the National Reactor Testing Station in Arco, Idaho began producing electric power in August, and during September the first irradiated fuel elements were started through the recycling process in the integrated fuel reprocessing system.  The EBR-2 is the first such fully integrated plant.  Photo, taken through a 5 foot thick radiation proof window in the Fuel Cycle Facility, shows the first uranium ingot (center of photo) ever produced from irradiated fuel by the Argonne National Laboratory-developed pyrometallurgical reprocessing method.  The EBR-2 fuel subassembly from which the ingot was reprocessed had reached an estimated 0.1 atom percent (a/o) burnup and was allowed to cool 30 days before reprocessing.  Such ingots are refabricated into fuel elements and returned to the reactor for further use by remote-control equipment."

So we have here a fairly historic photo, at least in terms of the history of US effort toward construction of breeder reactors and production of fuel through reprocessing. What proved a practical impossibility was finding this photo duplicated elsewhere -- it's not even in the definitive and authoritative volume on the whole EBR-2 program ("The EBR-2 Fuel Cycle Story, Charles E. Stevenson, American Nuclear Society, 1987.)  Reviewing my copy of this book, I found the following photo showing essentially the same device but without the ingot: 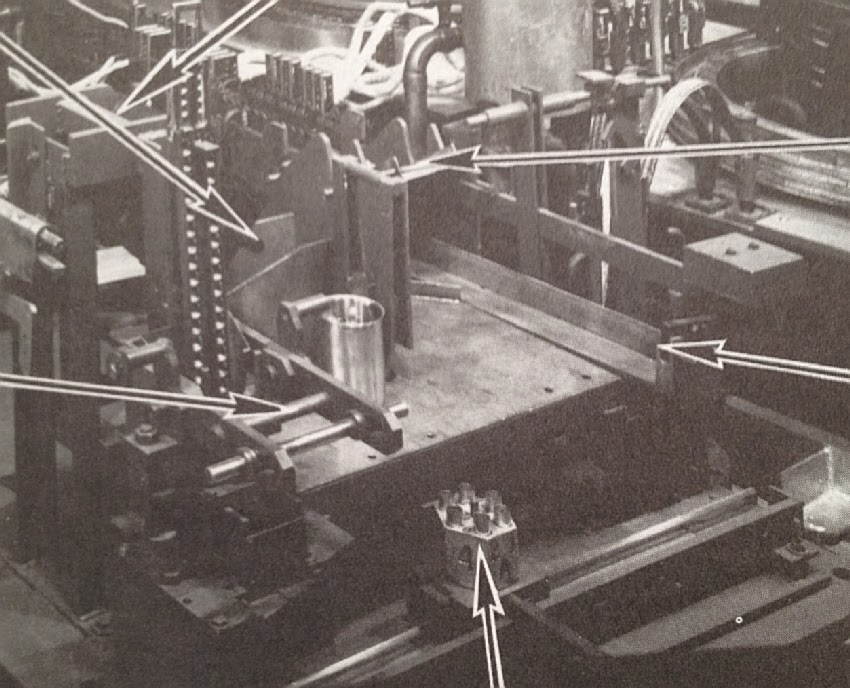 This photo can be found on page 91 of "The EBR-2 Fuel Cycle Story" and shows the IRAS device; this stands for Ingot Remover and Sampler.  Starting at the top right arrow and moving clockwise we see the tilting slide tray, the sample shear, sample cans, the can capper and the ingot holder.  The function of the IRAS was to remove uranium ingots from their molds first, then shear off two specially made small protrusions at the base of the ingot (which you can see in the earlier photo.) It also used the "can capper" to place lids on the sample cups into which the protrusions were placed; these sample cups were then placed into the hexagonal aluminum sample can indicated by the bottom arrow.  These sample protrusions were sent to the analytical laboratory; the ingot was then placed into a steel transfer and storage container.  Containers were stored on wall racks in a "critically safe geometry" while waiting to continue on down the fuel fabrication process.

What is fascinating about the whole EBR-2 project is that all of the fuel reprocessing equipment and the reactor itself were contained in the same enclosed facility, seen below in another illustration from "The EBR-2 Fuel Cycle Story." 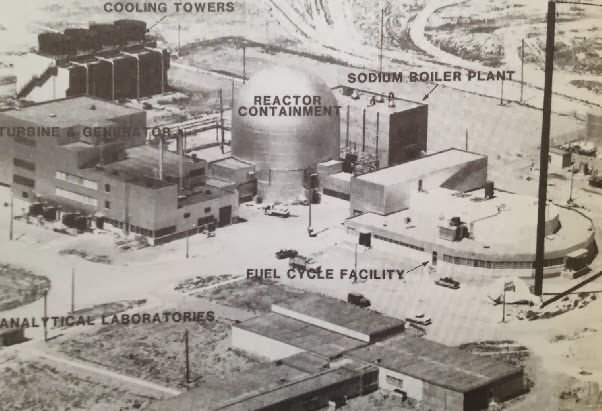 The EBR's fuel recycling project ended in 1969; the decision had been made to continue metal cooled breeder reactor technology using a different technological path for the fuel cycle (aqueous instead of pyrometallurgical reprocessing) and even that proved stillborn when the Liquid Metal Fast Breeder Reactor Program was cancelled in the early 1980's.

The EBR-2 (or EBR-II if you'd like) reactor itself continued to operate for other purposes until 1994 when it was shut down for the last time after funding was cut off.

I do highly recommend this book, still available from the American Nuclear Society, for those interested in the history and in the process itself.  You can also click here to see Argonne National Laboratory's page on fast reactors; scroll down a bit and find the "EBR-II" tab.

That's it for this week's Carnival post.  Thanks for reading!