Very quietly - so quietly, you might not even notice here in the United States - a long list of applications from Japanese utilities to the Nuclear Regulation Authority for inspections of reactors intended for restarting has backed up.

As of today, there are sixteen reactors for which applications launching the restart process have been submitted.  Below is a chart showing all of those up until Christmas Day 2013. 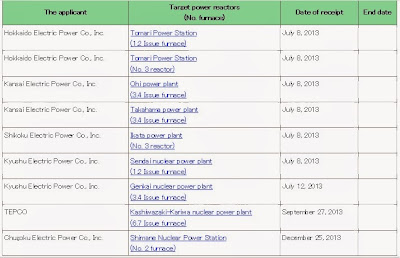 This chart has been translated from this page on the Nuclear Regulation Authority's website.  Click to enlarge it.
As we can see, ten applications were received by the NRA on July 8, 2013 with another two on July 12.  In September, as I'd been expecting for some time, TEPCO applied to restart Kashiwazaki-Kariwa Units 6 and 7; Chugoku Electric applied to restart one unit at Shimane on December 25th.
(Latest reports [NHK World] state that TEPCO "hopes to resume operations at Kashiwazaki-Kariwa in July of next year.")
Not shown on this chart:  Tohoku Electric Power Company applied to restart Onagawa Unit 2 on December 26; receipt of this application announced by the NRA on December 27.
Also not shown on this chart:  Japanese press have reported that Chubu Electric Power Company will apply to restart Hamaoka Unit 4 in the first quarter of 2014.
Below is a clickable map of all nuclear plants in Japan.  From left to right, the key shows solid colored units as 'operating,' while units 'under construction' have hashed lines.  Units planned are empty shapes and units cancelled are crossed out.  This map is somewhat old - no nuclear plants are presently operating in Japan, so "operating" should be taken as "operable" with the exception of all six plants at Fukushima No. 1 Generating Station (Fukushima Daiichi) which are all decommissioning.

Also noted in news today (12/27) was the fact that another facility under NRA regulation but which is not a nuclear power plant has announced intent to restart work.  This is the Japan Nuclear Fuel reprocessing plant at Rokkasho; Japanese media are reporting that this plant will be applying for its restart inspection on January 7th, 2014 and intends to be ready to operate by October 2014.
We now have sixteen nuclear units at ten sites in Japan which have entered the application process, with another reactor at another site (to give seventeen at eleven sites) expected early next year.
Of further interest is another news item today, carried by NHK World which states that the NRA is about to announce its finding that the fault so highly described and examined below Kansai Electric Power Company's Ohi Nuclear Plant is not active.  According to NHK, there were six nuclear plants targeted for highly specific geological fault examination; Ohi is the first to have a clear settlement of the issue on the way, either way - and this one is positive. Kansai Electric was among the early applicants, filing for these two units in July.
Ohi Units 3 and 4 are the only nuclear plants in Japan to have restarted after the Fukushima Daiichi accident.  Coverage of that process on this site included the announcement that the reactors were approved to restart in June 2012, the announcement that Unit 3 had begun pulling rods on July 1, and the announcement of the startup schedule for Unit 4 as well as a description of some of the upgrades and modifications to that plant.
The listing does leave a very large number of units in question; the units selected to restart are generally the newest and most advanced units at any given nuclear plant site.  What the future holds for smaller, older units is still absolutely not clear at this time.  My expectation would be that application to restart these units would follow considerably after the newer units had been put in operation, and would have to be balanced against modifications required to older units by new NRA standards.  It's not out of the realm of possibility that some older units at some sites wouldn't be economic to refit and restart - given that they could be placed in a SAFSTOR status and not decommissioned until an entire nuclear generating station was decommissioned.  This would defer their decommissioning costs; considerations such as these will however be very highly specific, unit-by-unit, so that a complete estimate across Japan isn't quite possible yet.
These filings with the NRA are not a surprise to those of us following the situation in Japan closely; the Japanese economy needs the power these nuclear plants can provide so that their incredible fuel costs (at present very high due to imports of fossil fuels) can go down, and so that their manufacturing can get back going -- the country needs to reverse its trade deficit.  The present government has now made it abundantly clear that the "no nuclear" mandate is dead - and these forces together with the desire of the utilities to get back to making money selling their product (electricity) has led to a pile of paperwork for the NRA to review.
I'll be following this process as closely as is possible given the voluminous documentation involved, most of which is in Japanese.  What's important of course is to understand that safety is paramount in all of these nuclear plant restarts.  I wrote extensively some time back about the massive efforts that have gone into just two of the nuclear plant sites that are applying to restart; it's a matter of grave importance to the economy of Japan, and the future of its nuclear industry.  The best possible outcome is that these restarts go as smoothly as the almost-unnoticed run of Ohi Units 3 and 4 after the Fukushima accident, and that Japan's economy becomes the big news - not its nuclear plants or its regulator.
----------
More information:
﻿
Chubu Electric Power Company - Hamaoka Nuclear Power Station Today and Tomorrow.  This web page is an excellent addition to those linked in my piece on ANS Nuclear Cafe entitled "Preparing to Restart" which is linked in the last paragraph of the piece above.  Modifications, improvements and readiness to meet new standards are all discussed in this impressive page complete with video and illustrations.
----------
•UPDATE February 14, 2014
Today, Chubu Electric Power officially applied to the Nuclear Regulation Authority (NRA) for a safety review of Hamaoka Unit 4, as was predicted in the article above written in late December 2013.  According to Kyodo News, Chubu now expects the seawall around the plant to be finished in September 2015.  This makes 17 reactors applied for restart safety review at 10 sites.
3:15 PM Eastern 12/27/2013
ATOMIC POWER REVIEW
﻿
Posted by Will Davis at 3:11 PM