It's time for the weekly roundup of the best of the pro-nuclear bloggers and writers - the Carnival of Nuclear Energy.  This post-Thanksgiving holiday edition is, expectedly, smaller than the norm in terms of the number of contributors.  However, we have some interesting and unusual entries this week that make visiting the links more than worthwhile.

I'm also pleased to announce that Atomic Power Review will, in all likelihood, roll over 600,000 page views with publication of the 185th Carnival.  Not so pleased, however, that I've forgotten to show you a photo and ask you.... "What is this?" 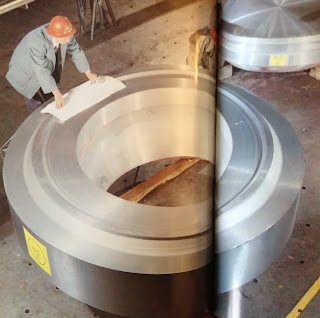 This is clearly a photo that covers two pages - and it's in a very old publication that I'm not willing to disassemble.  No credit is given for "big metal things" as an answer... and yes, of course, these are nuclear components.  Or.. and here's a hint.. you could also quite easily and correctly say that these are pre-final fabrication components of a larger component.  The answer after the Carnival entries!

Time Travel Reality and Fiction:  Just What Can and Can't Be Done

The author takes a look at time travel as conceived in fantasy and cinema ... describing this week's entry as "fun and novel."  I agree!  And quite fascinating as well.

Why was DOE's Low Dose Radiation Research Program defunded in 2011?


Rod Adams wonders – “Why was DOE’s Low Dose Radiation Research program defunded?”
In this post he traces what he found by digging through historical budget documents for the DOE Office of Science. The picture is not a happy one for people who are intensely interested in applying modern science to the question of determining the health effects of low dose radiation.
----------
ANS Nuclear Cafe - submitted by Paul Bowersox
Excitement about U-235 as a coal competitor, circa 1939-1940
Rod Adams takes a fascinating look back at the early days after the
discovery of nuclear fission almost 75 years ago. The nuclear pioneers
of the age were motivated by a scientific desire to gain a better
understanding of the fundamental structure of the atom -- and developing
a revolutionary new source of energy.
----------
Nuke Power Talk - Gail Marcus
Receiving the ASME Engineer-Historian Award
At Nuke Power Talk, Gail Marcus reports on receiving the ASME Engineer-Historian Award recently at the ASME conference in San Diego for her book, Nuclear Firsts: Milestones on the Road to Nuclear Power Development, and lists the recognition she has received for the book as one of the things she has to be grateful for this Thanksgiving season.
(APR note:  I have the exact book under discussion here, having obtained a copy at the ANS Annual Meeting in Atlanta this past summer.  I have a review of this book in the works - and let me say now without revealing too much that it's entirely positive to the point of making the book a "must have" for historians.)
----------
Forbes - Jim Conca
The Iranian Nuclear Deal is a Good One
Jim Conca gives his explanation as to why the deal struck this past week between the P5+1 powers and Iran covering Iran's nuclear programs and aspirations is a good deal for everyone involved.
----------

Hongyanhe Unit 2 Connected to Grid; 18th Chinese Reactor To Do So

This unit is a CPR-1000 pressurized water reactor, on which construction was started in 2008.  The first unit at the site has been operating on a commercial basis since June, and now Unit 2 is set to follow in a matter of months.

According to Prime Minister Nawaz Sharif, Pakistan would produce 40,000 MW of power from nuclear plants until 2050 and the government's priority was to start work on power projects to overcome the energy shortage.

That's it for this week's entries.  The only thing left is to explain what that photo you saw above really was.
The photo is from a time that many people either don't know, or else deny existed - a time when information, illustrations and even some data concerning the US Navy's Nuclear Propulsion Program were printed in publicly available materials.  The illustration is a Unites States Steel advertisement in the May 1959 issue of Nucleonics, and shows two forged components that will be part of one of the reactor pressure vessels to be installed in the nuclear powered aircraft carrier USS Enterprise.  (This ship had eight A2W reactors.)
The caption in the advertisement notes that these components, made of Ni-Cr-Mo steel, are the reactor vessel closure head flange (nearer the camera) and what it calls the top disc.  The flange forging weighs 74,000 lbs., while the top disc forging weighs 36,750 lbs.  After forging, the pieces "were given preliminary heat treatment and preliminary machining.  This was followed by quenching and tempering.  Then came a battery of tests:  ultrasonic inspection, tangential tensile tests, Charpy V-notch impact tests, grain size tests, bend tests and magnetic particle inspection."  These two parts, and a number of others, would eventually be stacked and welded together to form what we today would describe as a ring forging design of reactor pressure vessel.
The advertisement also encourages the reader to send for the USS six-page booklet on USS Nuclear Forgings.  Which, I might add, you can bet I'll acquire on sight.
----------
For more information...
Readers might recall the "ring forging" description regarding reactor vessels from the whole Doel / Tihange / Rotterdam Dockyard reactor vessel anomaly debacle, which is now fully resolved since the plants involved have been allowed to restart.  (This chain of events marks one of the more significant events in which anti-nuclear prognosticators were dead, flat wrong... again.)  Information about those vessels, and the early findings, can be seen at the following post I wrote for the ANS Nuclear Cafe some time back.
Possible Pressure Vessel Flaws - Doel 3
----------
12:25 PM Eastern 12/1/2013
ATOMIC POWER REVIEW
Posted by Will Davis at 12:25 PM