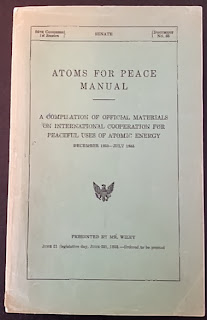 Above you see the front cover of my copy of the ATOMS FOR PEACE MANUAL, which was printed by the Government Printing Office in 1955 and which is a compilation of important papers, commentaries and regulations pertaining to peaceful use of atomic energy ranging from the December 8, 1953 date of President Eisenhower's famous speech (often referred to today as his "Atoms for Peace" speech, this volume lists his speech's official title as "Atomic Power for Peace") through roughly the date of publication.

We find ourselves 60 years out now from that historic and often-mentioned speech, so often credited with launching the effort to spread the benefits of nuclear technology nation- and world-wide.  It's fitting today to look at this and perhaps one other book at the very least.

The first part of the Introduction of this volume reads as follows:

On December 8, 1953, the President of the United States, Dwight D. Eisenhower, in an address before the General Assembly of the United Nations, proposed that governments --

begin now and continue to make joint contributions from their stockpiles of normal uranium and fissionable materials to an international atomic energy agency...  The more important responsibility of this atomic energy agency would be allocated to serve the peaceful pursuits of mankind.  Experts would be mobilized to apply atomic energy to the needs of agriculture, medicine, and other peaceful activities.  A special purpose would be to provide abundant electrical energy to the power-starved areas of the world.

August 8, 1955 marked the opening of the International Conference on the Peaceful Uses of Atomic Energy. 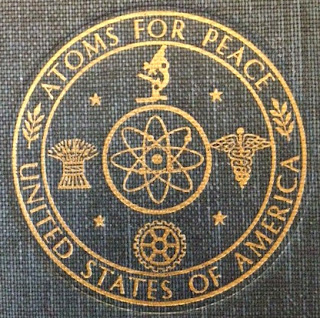 (Above, front cover detail from "Shippingport Pressurized Water Reactor," part of the official AEC literature developed and presented at the Second International Conference on the Peaceful Uses of Atomic Energy, Geneva, 1958.)

In 1953, the US Navy's large CVR project intended to result in a nuclear power plant prototype suitable for use in an aircraft carrier was cancelled.  This project's complete design information was extrapolated into, and in many ways actually directly transferred into a new project to build a civilian (or commercial) nuclear station in July, 1953.  Admiral Rickover was given overall responsibility for the project, and (naturally) Westinghouse was awarded the contracts to "design, develop and build the reactor plant" (according to "Shippingport Pressurized Water Reactor.")  In March, 1954 - only few months after Eisenhower's speech and over a year before the Atoms for Peace Manual was printed - Duquesne Light Company was chosen to host the plant.  The siting of the plant gave the project its lasting name - the Shippingport Atomic Power Station.

This was not the only project being mentioned in the press.  Other companies had other ideas, and after the Shippingport announcement everyone seemed to scramble to develop other technologies for power production.. to say nothing of the other many uses of nuclear technologies.

The Introduction of the Atoms for Peace Manual (written, by the way, by Hon. Alexander Wiley, Senior Republican, Senate Committee on Foreign Relations) makes it clear that the benefits to man of nuclear energy were perceived fairly well, even at that early date.  On page VI of this section we find the following passage:

The average layman may only vaguely understand the technical process by which vast amounts of energy are released from the splitting of the atom.  But he can definitely appreciate the ultimate significance to himself and to his loved ones in the making available of plentiful low-cost energy, particularly in power-short underdeveloped areas.  He can appreciate the miracle of new healing weapons for the eradication of man's age-old enemy of disease and new tools to increase food production so as to eliminate his age-old enemy of hunger.

Indeed, few news developments within the memory of living man have more stirred the imagination of human beings everywhere, than has the atoms-for-peace effort.  Few developments have provided man with more substantial hope that, once and for all, men might be able to break the tragic pattern of the diversion of so much of science to war, a pattern which has brought such suffering and dread to mankind."

None of what Mr. Wiley said in 1955 is now untrue.  All of the promises of nuclear technology stand today - they exist, TODAY - just as they did in that early period when the promise of a better tomorrow led men and women forward on a quest to understand and develop incredible new technologies.  It is right that we reach back occasionally now and touch those sentiments, undiluted by apprehension and unclouded by fear.  The "better tomorrow" promised therein still awaits.

The "only remaining complete physical symbol" of Eisenhower's "Atoms for Peace" program, says MARAD's Erhard Koehler, is the nuclear powered prototype and World ambassador NS SAVANNAH.  I recently saw the ship again (as many of you know) after twenty years, and a large photo essay of that experience is posted at ANS Nuclear Cafe.