News came out yesterday that the long-delayed, much debated Indian missile sub INS Arihant hit a major milestone as its reactor was made critical for the first time.  This does not signify an immediate submarine ballistic missile deterrent capability for India, as both the submarine and the missiles have yet to be proven out, but it's a major step.

Now, to be honest, I knew about the Indian nuclear sub program vaguely but had no real details.  When I saw the following post yesterday, I was quite surprised at the photograph contained therein.  Click the link below to see what I saw.

The illustration is of the prototype plant which was built some years back to prove out the nuclear power plant for the submarine.  Navy old-timers of a certain vintage will find the photo very familiar looking -- but more of that later.

Here is another article from May, when it was believed that the Arihant would go critical in June:

INS Arihant to be made critical next week

The photo in that article can be enlarged; click here to see it full size.

The Indian submarine program has developed under a solid cloak of secrecy, even using deceptive names for some of its programs.  I've scanned through a number of online sources, and here are the details I've been able to gather.

•  Work on the Indian nuclear sub program dates from the 1970's, and has long been referred to as part of the Advanced Vessel Project or AVP.

•  The prototype nuclear plant is located at Kalpakkam.  It was developed under the program "Plutonium Recycling Project" or PRP, under direction of BARC or Bhabra Atomic Research Center.

•  The prototype plant first achieved criticality November 11, 2003 and after a period of what we must assume was testing and modification was declared operational September 22, 2006.

•  The prototype plant was only shown to the press once, in early August 2009, about one week after the well publicized launching of the Arihant itself.  Apparently only one photo was cleared for distribution.  A report on the press tour can be found here.

•  Most sources list the prototype and the Arihant reactors as being rated 82.5 MWt.

•  This link gives some details of the program's subcontractors, in order to make clear that this plant is a completely indigenous development.  It names the manufacturers of the reactor vessel and steam generators, for example.

For further reading, here is another news announcement from August 10th.  This covers first criticality of the Arihant's reactor (dockside testing of the steam plant supplied by a shoreside steam supply having already been completed) and gives an overview of the real stretch of time ahead before the sub can be considered fully operational as a military asset.

It has been made clear that India is building more submarine power plants for follow-on units of this class, and that it has more than enough capability to produce highly enriched reactor fuel for these plants independently.  It expects to be able to produce lower-enrichment reactor fuel for large commercial nuclear stations in the future.

I said that some old-timers would find the earlier prototype plant photo of interest.  Below you'll see why.  (Click photos to enlarge.) 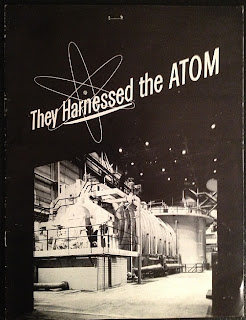 This is the front cover of a booklet entitled "They Harnessed the ATOM," published by Westinghouse Electric Corporation in September 1954.*  This advertising / commemorative piece gave (completely unclassified) details of the construction of the prototype for the Nautilus, the launching of the Nautilus itself, and details on the projected Shippingport Atomic Power Station, then years away.

Resemblance of the illustration above to those linked further above showing the Indian prototype plant at Kalpakkam is all too obvious.  The one just above shows the STR Mark I, better known as the S1W plant; this was the prototype for the USS Nautilus, and was built at the National Reactor Testing Station, Idaho.

According to the booklet, Westinghouse Atomic Power Division "took on this pioneering assignment in December 1948."  The reactor was first taken critical on March 30, 1953 and the first steam power was actually developed by the powerplant on May 31.  Full power was achieved on June 25... meaning that the whole project took just four and a half years from contract to full rated power.

Below is another view from page 7 of this book, showing the plant from above. 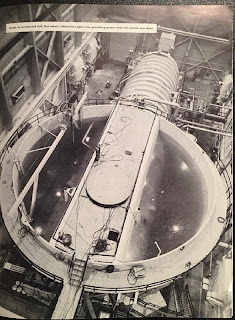 Clearly visible in both the photos of the Arihant prototype and in the Mark I are large cylindrical tanks around the plants; the booklet describes the tank above as containing 385,000 gallons of water.

Below is a press photo from Westinghouse which was released in January 1954, right ahead of the launching of the USS Nautilus. 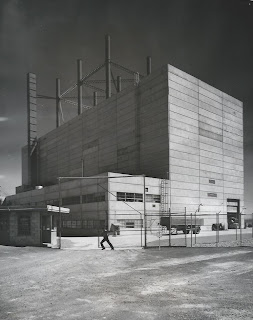 Caption (on back) --  "WINDOWLESS BUILDING ON IDAHO DESERT HOUSES FIRST ATOMIC SUB POWER PLANT ...  National Reactor Testing Station, Idaho -- Inside the large, windowless part of this eight-story building, engineers and scientists of the Westinghouse Electric Corporation are testing the land-based prototype model of the world's first practical atomic engine which will power the USS Nautilus.  Located at the Atomic Energy Commission's National Reactor Testing Station on a southeastern Idaho desert, the specially designed structure is made of concrete slabs bolted to steel framing.  A unique ventilation system keeps the interior of the building slightly pressurized so that dust from outside will not seep into it.  The six steel stacks on the top of the building provide exhaust outlets for emergency purposes.  At the base of each stack is a big fan capable of discharging some 36,000 cubic feet of air per minute.  The large square stack at the left is for normal ventilation.  On May 31, 1953, full-scale testing of the submarine power plant was begun.  This land-based model, designated as "Mark I" was designed and built by Westinghouse in cooperation with the Argonne National Laboratory at the Atomic Energy Commission's Bettis Plant.  The atomic engine which will power the Nautilus, called Mark II, also was built by Westinghouse at the Bettis plant."

India has clearly done two things:  First, it has achieved roughly the first several important steps in establishing a nuclear powered naval submarine force, at least so far as the power plant is concerned; it has operated a prototype submarine plant, which outwardly is clearly designed along established (and publicly available) lines generally, for some years now and has taken the seagoing version of this plant critical for the first time.  Second, though, it has taken very many years to accomplish these tasks, with first criticality of the prototype plant occurring some ten years ago, operational status three years later, and only just now criticality of the first seagoing plant.  (Nautilus was launched January 1954 and its reactor first went critical in December 1954, under two years after the prototype went critical.)  It remains to be seen if the plant will peform well in a moving, rolling platform and if it will be reliable at sea.  Trials are not expected for the Arihant until at least 2015.

It has been reported that the PWR (pressurized water reactor) type plant used in the Kalpakkam prototype and the Arihant is expected to lead to a completely indigenous 900 MWe commercial nuclear plant, which itself is only in the design stages and is yet many years off.  What's important is that India is very determined, has apparently faced and beaten many problems with its program, and forges into the future with a clear purpose and initiative to both develop a strategic deterrent and, at the same time, a stand-alone industry building pressurized water reactor plants.

Another Navy reactor prototype site has been covered on my website before - the Kesselring Site in upstate New York.  Last year, it had an important announcement.