Atomic Power Review is proud to host the Carnival this late August weekend, after a period of not having hosted since June.  This long running tradition among pro-nuclear bloggers showcases the best of the pro-nuclear blogs and, should it be the only pro-nuclear blog material you see every week, is a great way to keep up on events.

This site first hosted the Carnival all the way back on July 8, 2011 with the 60th edition.  From that very first time, I began a tradition here of showing readers a photo at the start and asking them "What is this?"  This has continued until now.  Some are easy, some are hard; I had to look for a full hour this morning before I found a photo that I thought could be guessed, but was tricky and which I had also never used before.  So here you go - What is this? 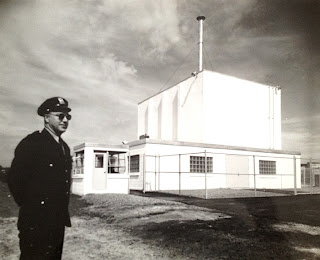 The answer after the Carnival entries.  And here they are!

Ontario’s nuclear generating fleet has produced record amounts of power over the past few weeks. Using current and historical electric power production data, Steve Aplin of Canadian Energy Issues shows that the nuclear fleet is by far the most efficient producer of power in Ontario. Because it emits no air pollution, nuclear is also the only technology that can further reduce electricity-related air emissions without curtailing vital economic and social activity.

Why did gullible reporters promote a student paper about nuclear facility security?


There was a flurry of attention in the press last week when a political science professor held a press conference to tell the world that one of his students had written a paper concluding that all of the nuclear power plants in the United States were vulnerable to a terrorist attack.
For unpublished reasons, a number of reporters accepted the scare story at face value and published articles stoking fear, uncertainty and doubt. Editors at outlets as varied as Fox News, CNN, Reuters, and National Journal ran fear inducing headlines.
{Atomic Power Review note:  This is one of a number of good "debunkings" of anti-nuclear rhetoric which were published this week.  Another one can be found here, at Scientific American, wherein another unrelated scare piece is deconstructed.}
----------
Yes Vermont Yankee - Meredith Angwin
Whack-a-Mole on Anti-Nuclear Claims: Sometimes It's Necessary
"Someone is WRONG on the Internet!" But should nuclear advocates care? Sometimes we have to care. When the outrageous anti-nuclear statements are getting wide play, we have to answer. Sometimes, advocacy is whack-a-mole.
----------
Science and Technology - Robert Hayes
Particle Accelerators Serve in Medicine and Science
What an accelerator really does, in terms everyone can understand, plus details of how these amazing machines serve us in many fields - especially the field of medicine.
----------
The Hiroshima Syndrome - Leslie Corrice
Japan's Disastrous Flirtation with Worst-Case Scenarios
Last month, TEPCO's president said that all future problems at F. Daiichi would be reported with 'worst-case scenarios.'  Transparency means "telling it like it is" in a timely fashion. The "official" creation of worst-case scenarios makes a mockery of transparency.
----------
ANS Nuclear Cafe - submitted by Paul Bowersox
“Nuclear Energy Development and Slowing Climate Change”

An approachable and informative discussion of the race between
large-scale nuclear energy production and climate change - with an
emphasis on the history and potential of molten salt, thorium,
generation IV reactors - by grassroots supporter Jerry Nolan.
“Fukushima Daiichi: Bolted tanks, blast from NRA”

The discovery of radioactively contaminated water leakage at
Fukushima-Daiichi was declared an INES Level 3 event this week, focusing
the world’s attention on the site once again -- Will Davis with an
update and analysis of the situation and implications for the future.
----------
Next Big Future - Brian Wang
A summary of safety features of all molten salt reactors and a review of design choices for molten salt reactors.
David LeBlanc of Terrestrial Energy makes a new presentation at the Thorium Energy Alliance Conference 2013. He describes the integral molten salt reactor and how they plan to make a demo reactor within 8 years.
Fuel cycle costs for major types of nuclear reactors
----------


A straightforward and quite honest post by Gail Marcus about the continuing impacts of the nuclear shutdown in Japan on the economy and the country's carbon reduction goals. She notes that the average person may perceive that things are functioning almost normally. That is only because fossil-fired plants have taken up the slack--but at a cost.
----------
Captain's Choice Posts -- Blog posts I have selected as important posts of this week, which weren't submitted by authors or administrators.
NRC Blog:  Security and Nuclear Power Plants - Robust and Significant
NEI Nuclear Notes:  Welcoming Progressives for Nuclear Progress
Captain's Choice Blog:  Everyone should check out NuExec Consulting's blog.  This blog posts weekly on Fridays, and is a refreshing change from what we normally see on pro-nuclear blogs because, while it gives lots of insight into the UK nuclear scene, it's also very human and direct.
----------
That's it for the entries this week!  All that's left is to tell you what you saw earlier - and I am willing to bet a number of you guessed it.
The photo is a press release put out by ALCO Products on September 24, 1956, showing its new Criticality Facility.  Below (since historians might be interested) is a view of the back of the photo, with glued-on statement.  I'll reproduce the text of the statement below the photo. 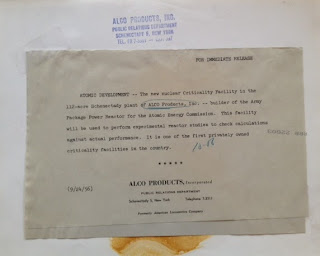 "ATOMIC DEVELOPMENT -- The new nuclear Criticality Facility in the 112-acre Schenectady plant of ALCO Products, Inc. -- builder of the Army Package Power Reactor for the Atomic Energy Commission.  This facility will be used to perform experimental reactor studies to check calculations against actual performance.  It is one of the first privately owned criticality facilities in the country."

It's interesting to note that the bottom of the release states "Formerly American Locomotive Company," as the name change was still relatively new.  It's also important to note that this facility was built to support the AEC reactor program which resulted in construction of a number of small reactors for various remote locations, and not in support of an oft-rumored nuclear locomotive program.

ALCO Products did not achieve the front-running status in the nuclear energy programs of the US as it might have wished.  While it had early success with small plants for the Army (not only acting as reactor designer and manufacturer, but also manufacturing the reactor pressure vessels, pressurizer vessels, and steam generators for some projects) it didn't make any break into the larger power reactor market -- although ALCO was in fact offering a 125 MWe commercial nuclear power plant in 1959 which it stated in advertisements was fully designed.  None was built.

In 1963, ALCO Products shed most of its nuclear business and refocused on its roots of locomotive manufacturing.  ALCO briefly made some headway against new, direct competitor (and former partner) General Electric in the diesel-electric locomotive field, with introduction of the new ALCO Century locomotives (so named to mark ALCO's 100th anniversary) and with an attempt to manufacture very large locomotives using hydraulic, instead of electric, transmission.  Reliability problems, coupled with dominance of the field by Electro-Motive (a division of General Motors) and unending expenditure of monies by General Electric in the field made ALCO's position shaky.  After divesting its nuclear business, ALCO had been bought by Worthington Corporation, which later became Studebaker-Worthington.  The owners decided to get out of the locomotive business in 1969, and ALCO's product lines which remained were sold off.

The name remains familiar today in nuclear energy circles not just due to the history so briefly detailed above, but also because of the fact that some nuclear plants still employ ALCO design model 251 diesel engines as part of their EDG equipment.  The 251 product line has passed through a number of hands since 1969 but presently is under the (very competent) roof of Fairbanks-Morse - itself a former competitor in the diesel locomotive field.

Getting back to nuclear energy.. the Critical Facility's days didn't end when ALCO sold its nuclear business; this facility too was sold, and remains today in modified form as the Walthousen Reactor Critical Facility, operated by Rensselaer Polytechnic Institute.  Click here to see their page about the facility, including a link to a long video which shows the facility off to good advantage.

I hope you've enjoyed the Carnival this week.  Let me know if you guessed the photo before I identified it, using the comments section!