Atomic Power Review is proud to host the 154th Carnival of Nuclear Bloggers on this last Sunday of April, 2013.  This great feature both promotes the top English-language pro-nuclear blogs, and (by way of the nature of its operation) gives the general reader a pointer at what the authors of these blogs (or administrators in some cases) feel were the outstanding items of the week.

There's always a game here at Atomic Power Review when I do the Carnival; I show a photo from my vast archive of useless information and ask you to guess what it is.  We've been having more reports of correct guesses of late - so let's hope that keeps up.  For now, What is this? 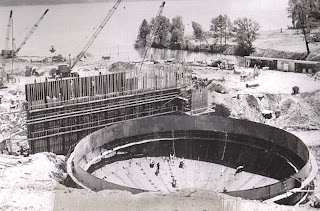 Clearly, this is a significant construction site.  There is a river or stream outlet visible in the upper right quadrant of the photo and much more visibly a river along the top.  We see a large concave structure of sorts being built here (click to enlarge!) and a very heavy reinforced wall next to it. I'll give a further hint:  This photo is dated June 21, 1962.  Yes -- of course this is nuclear related!  The answer .. and much more .. to follow the Carnival.

Civil Disobedience May Be Required to Overcome Illogical EPA Radiation Limits.  Adams relates an exchange with an author of a recent popular article on LNT, and explains why he's adamant that the overly restrictive limits on radiation exposure be challenged and remove.

Six Earth Day Facts.  Facts about natural nuclear phenomena and the environment.  Some of these facts might really surprise you.


Nuclear Power and Carbon Emissions:  Gail Marcus takes on some erroneous allegations about the carbon emissions from nuclear power at Nuke Power Talk. She notes that some of them have been floating around for a long time, and analyzes why they may be believed and why they are wrong. Since one of the benefits of nuclear power that the public most appreciates is their low carbon emissions, it is important to set the record straight.
----------
ANS Nuclear Cafe (submitted by Paul Bowersox)
New EPA Guidelines for Response to Radioactivity Releases:  The U.S. Environmental Protection Agency recently released draft standards and recommendations for response in the event of a large release of radioactive material into the environment. Jim Hopf assesses the current and proposed policies and their underlying assumptions - and finds them quite unwise and indefensible. The draft EPA guidelines are out for public comment, and Hopf urges readers to respond.
----------

Fukushima Showed No Radiation Health Consequences:  Robert Hayes examines the fact that there haven't been reports of radiation injury as a result of the March, 2011 Fukushima accident, using UNSCEAR and WHO documents as support; he also briefly discusses low-dose effects.

Day 72:  The Grand Finale.  Baker rounds up her grand European nuclear tour with a visit to AREVA's fuel reprocessing facility at La Hague.  Her visit is accompanied by David Hess of the World Nuclear Association.  The two give us a tour of the facility, with many details and interesting photos.  A grand conclusion to the series!

Meredith has two posts this Carnival.  In "Shaffer knows about spent fuel - Alvarez talks about it," she presents details of anti-nuclear activist Robert Alvarez's visit to Vermont.  At the date of the first post, only anti-nuclear "experts" were invited to testify at a legislative committee event on spent fuel.  Later, colleague Howard Shaffer was in fact invited to testify; this led to a second post on the subject which is entitled "Shaffer to Testify - Cheerful Wednesday."


Energy and work: saluting those who do the most work, and never stop—even for a second.  As a weekend warrior, Steve Aplin thought he was pretty amazing doing intense workouts like hot yoga and crossfit—until he crunched the numbers and realized his personal best would be barely enough to keep a single 100-watt light bulb lit for several short minutes. That humbling revelation made him appreciate nuclear power plants, which produce gargantuan numbers of watts continuously for hundreds of days at a time, all the more.
----------
Next Big Future - Brian Wang
The Harvard Business Review looked at the the Spacex process for lowering the cost of space.

Spacex has a big goal, learned from the past, looking at the whole picture to find and prioritize opportunities, then refining key aspects of the space flight model to achieve their objective — is an approach that can make any organization more creative about cutting costs.

SpaceX approach innovates and transforms by looking at the entire business model instead of the parts. Cuts weren't just made to the physical rocket itself but to everything surrounding it — overhead, support services, development time frame, and more.

* Sustaining cost reductions over many years
* Reinvest for more innovation

Nextbigfuture looked at where the Spacex approach is being applied in energy.
Terrestrial Energy looks like it could make a radical difference in cost and supply of energy
Costs and Economics of Integral Molten Salt Reactor
Each 300 MW thermal MSR would generate $1 billion per year in oil revenue from the oilsands.
A 300 MW thermal reactor would be the same as a 100 MW electrical reactor. Even if costs were as much proportionally as a $10 billion 1 GWe conventional nuclear reactor (the high costs of the most expensive European or US projects.) the $1 billion cost would be recovered in about 2-4 years. Also, they indicated that there is no turbine to produce electricity since only steam is used. So the costs should be $700 million max.

This profitability means that the first 200 units should easily be profitable. Usually making more units has a improvement rate in lowering costs by a few percentage points for each later unit. The oilsand units would also generate the money to help payoff research and development costs, which would initial come from oilsand taxes and oilsand partners.

In previous design discussions about a similar Denatured Molten Salt Reactor , David LeBlanc believed that capital costs could be 25% to 50% less for a simple DMSR converter design than for modern LWRs (light water reactors).
Nextbigfuture calculates that the IMSR could get down to 0.86 cents per Kwh.
----------
The Hiroshima Syndrome - Leslie Corrice
Japanese High Court does Right Thing for Wrong Reason.  A high court in Japan has rejected the demands of a few Fukushima parents to evacuate tens of thousands of not-at-risk children to other parts of Japan. The court said there was no legal precedent for it. However, they should have used recent scientific reports on the good health of Fukushima children as their reason.
----------
That's it for this week's Carnival entries.  All that's left is to answer the question -- what was that picture at the top of this post? 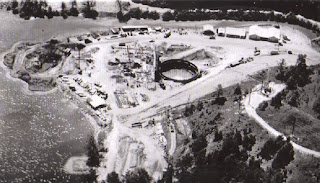 The photo (and that above) are June 21, 1962 photos of the initial construction phases of the Peach Bottom Atomic Power Station, located in Peach Bottom Township, York County, Pennsylvania, along the Susquehanna river.  These photos were provided to the press by Philadelphia Electric Company.
Peach Bottom 1, as it's now known, was an experimental high-temperature gas cooled reactor rated 115 MWt / 40 MWe and which was built under the third round of the AEC "Power Demonstration Reactor Program."  The reactor plant vendor was the General Atomics Division of General Dynamics Corporation (usually referred to just as "General Atomics" or just GA) and the engineer and construction contractor for the plant was Bechtel Corporation.  Here is a brief history.

Philadephia Electric was involved early with nuclear energy, taking part from 1952 in what became the Enrico Fermi Atomic Power Plant.  The company formed HTRDA, or High Temperature Reactor Development Associates along with 52 other utilities to research and develop high temperature designs, which culminated in a November 1958 proposal to the AEC to build a new design of General Atomics helium-cooled reactor.  The Joint Committee on Atomic Energy approved the project proposal in June 1959, and in August 1959 contracts were signed to build the plant at the location shown above.
The construction permit was issued in February 1962 (Permit No. CPPR-12)  - and you can see the progress by comparing the unspoiled site illustration (from a Peach Bottom souvenir brochure) and the June 1962 photos.
Below, artist's conception of the plant as designed. 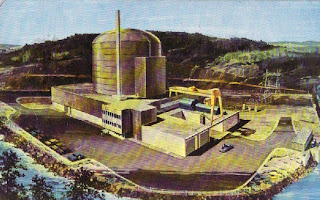 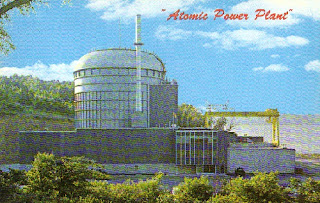 The core for this reactor contained 804 fuel elements, which as fuel contained both 93% enriched uranium carbide and thorium carbide dispersed in graphite pellets.  The reactor plant was designed to load follow at a rate of 3%/minute down to 30% power - and after final shutdown of the plant, Philadelphia Electric reported that the plant had in fact operated in the load following mode for the majority of its seven year operating time frame.
The helium coolant entered the core at 660F and exited at 1380F.  This allowed the plant to produce steam at 1450 PSIG and 1000F.
Operation was essentially as planned; however, the fuel elements began to develop cracks in 1969, and while activity released to the helium coolant was minimal, the decision was made to refuel the reactor with improved elements whose design eliminated or reduced the chance of such cracking.  This second core first started up in July, 1970. 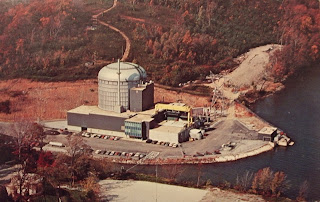 The experimental nature of the plant and its small size led to the decision to shut it down permanently, which occurred in October 1974 at the second core's end-of-life.  There was just not economic support for a 40 MWe prototypical nuclear plant in the vastly expanding Philadelphia Electric system.  Plans were made to replace it.
The HTGR as a concept did not continue in the Eastern U.S.  While there was an initial attempt to build a further, developed HTGR at what became the site of the Ginna Nuclear Station, the decision was made to build a PWR there instead.  The next-generation HTGR was, in fact, built - but as the Ft. St. Vrain nuclear station, out West.
The site of the Peach Bottom Atomic Power Station was not destined, though, to become a footnote to nuclear energy history.  Two much more powerful General Electric BWR units were built on a much expanded site footprint.  Below, we see Peach Bottom Units 2 and 3 under construction beyond the original unit and its Visitor Center (lower left corner of photo). 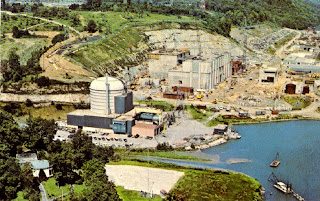 Peach Bottom 1 was defueled and placed in SAFSTOR condition, in which it remains today.  From the NRC website entry:
Peach Bottom - Unit 1
The plant, in York County, Pa., was shut down in October 1974 and is in SAFSTOR with no significant dismantlement underway. Active decommissioning of Unit 1 is not expected until 2034, when Units 2 and 3 are scheduled to shut down. The PSDAR public meeting was held on June 29, 1998. The spent fuel has been removed from the site and is stored at the Idaho National Laboratory.

I hope you've enjoyed the 154th Carnival and the look back at Peach Bottom 1.  Thanks for visiting!