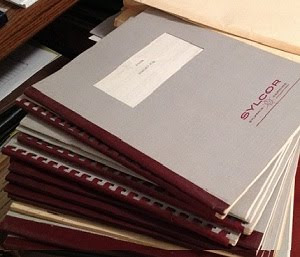 SYLCOR WESTERN OFFICE 4: THE PRODUCTS AND THE PLAN

The story of Sylvania-Corning Nuclear's attempt to open a Western Region office, told though original papers and company documents. Make sure to check out the previous installments: Part 1 Part 2 Part 3

In our last installment, we showed Sylcor's developments in aluminum, plate type nuclear fuel elements. It is clear from the many varied papers in the Vadeboncoeur collection here at APR that Sylcor's management believed, at least through the 1950's, that this kind of fuel would be a major part of the early overall nuclear fuel business. A number of early test / research reactors used MTR type fuel elements, as they were then known, or close copies. Sylcor decided that its position in the business could be bolstered not by standing ready to manufacture any variant required of this type of element (whether the variations were size related or enrichment related) but rather by offering completely standardized fuel elements and assemblies.

The Sylcor Standard Fuel handbook shows four varieties of completely standardized fuel elements having been available; these are described by their Sylcor fuel element type numbers and basic characteristics and are in the order found in the handbook:

All elements were uranium-aluminum alloy encased in aluminum clad; enrichment of uranium for all was 90%.

All of the mechanical drawings in the Standard Fuel book are dated January, 1959 so we may assume that this program did not begin until roughly that date. 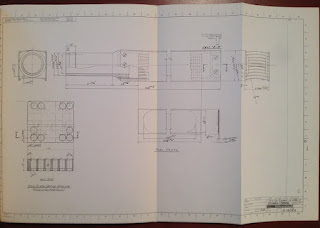 Above, from Sylcor Standard Fuel book; mechanical drawing of A-1091-C fuel element, first page. This book - and these drawings - have not seen the light of day in many years, so I did not make too serious of an attempt to flatten them out, much less separate them from the book for scanning. 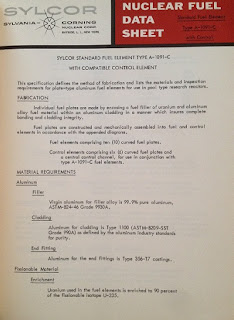 Above, first page of Specifications for A-1091-C fuel elements.

At this time (as we will see when we get back directly to Jim V's personal history) Sylcor was both doing business in these MTR type elements and other kinds of elements, as well as trying to get into all sorts of other materials businesses (beryllium for the nuclear weapons business seemed important, among many other things.) As time progressed, Sylcor further attempted to streamline the fuel cycle by providing an innovative arrangement for the time, considering the regulatory environment in which the AEC owned all special nuclear material, no matter where it was.

Sylcor added what it called its Package Plan to the Standard Fuel program; with the Package Plan, Sylcor obtained all the necessary permits from the AEC as well as the special nuclear materials, with the end user of the fuel elements only being required to obtain an AEC permit for the amount of special nuclear material to be contained in the sum total of supplied fuel elements. This may seem a bit vague in today's world - so let's read, from the Sylcor "Terms and Conditions of Sale / Background and Explanation" handbook, which contains both a full Sylcor blank contract and full explanation for each provision of the contract, the background information on the Package Plan:

"Although the Atomic Energy Act of 1954 went a long way in promoting a climate for the development of private enterprise in the atomic energy field, the Act nevertheless maintained the requirements for detailed supervision and control by the Atomic Energy Commission over our industry. These controls and supervision are no less present with respect to the fabrication and supply of fuel elements than they are with respect to the operation of a nuclear reactor. Thus, for example, all special nuclear material (i.e., generally speaking, plutonium and enriched uranium) is owned by and must be obtained from the government. To receive and use this special nuclear material a license from the Atomic Energy Commission is required. In addition, an allocation must be obtained from the Commission for specified amounts of such material and undertakings must be entered into to accept financial responsibility for the material authorized to be received. Until very recently, it had been the custom in the industry, bred in part of necessity, for the customer to obtain all of the necessary allocations and materials for the fabrication of fuel elements. Assuming that the fuel element fabricator had obtained a material license from the Commission, he then fabricated fuel elements from the materials furnished by the purchaser pursuant to the purchaser's allocation. Frequently, the purchaser continued to be financially responsible, in whole or in part, for the fissionable materials including process losses, scrap recovery costs, use charges and overage requirements. This procedure obviously imposed many serious burdens on the purchaser and created major problems of timing and coordination both for the purchaser and the seller. In order to simplify the purchaser's problem and expedite the fabrication and supply of fuel elements, Sylcor has developed a package fuel plan under which we agree to take care of all of the necessary details, permits, allocations, licenses and to otherwise undertake all obligations relating to the fabrication and supply of fuel elements to a customer up to the time that the fuel element is delivered complete at the customer's door. Under this plan, we request only that you, our customer, obtain prior to delivery of the fuel elements an allocation to which any special nuclear material used in the fabrication of the fuel elements may be transferred at or prior to the time of their delivery to you. As of the time that this booklet was written, this condition appeared to be necessary to enable us to use our own allocation for other customers. If applicable regulations should be revised in this respect we will modify these provisions accordingly. In addition, of course, you are expected to obtain such permits and licenses as may be necessary for you to legally receive delivery of the fuel elements. We believe that you will agree that it is necessary that you also accept financial responsibility for special nuclear materials in the fuel elements once they have been delivered to you."

The next paragraph of the manual simply covers how the above information relates to each varied clause in the draft contract which is contained in the front of the manual. Special discussion is given, however, to something that had apparently already become a problem for Sylcor -- regulatory log jam or else customer inattention preventing proper licensing on time so that Sylcor could actually ship out the fuel elements it had fabricated. "Storage- Article V" of the draft contract covers this provision, but the descriptive text covering this provision from the "Background / Explanation" section of the book is far more descriptive:

"Sylcor is not in the storage or warehousing business. We neither have the facilities nor the personnel to take care of extensive or prolonged storage. However, in circumstances such as those posed in the preceding paragraph we may have no alternative but to store some or all of the items you have ordered. Furthermore, we recognize that unforeseeable circumstances may require you to postpone delivery of some or all of these items. Circumstances permitting, we will attempt to accommodate you in such event by temporarily storing such items. However, since such storage will either be at your request or due to other circumstances beyond our control we feel that it is only fair that you agree to pay to us the contract price for all items stored as if they had been delivered to you. We will agree to bear all risks of damage to or loss of any of the stored items which against standard Nuclear Energy Physical Damage insurance is available to us. In view of the relatively high cost of insurance to cover these risks together with the cost of maintenance of appropriate facilities and personnel a storage charge is provided for in Article V in addition to provision for reimbursement to us of all AEC use charges on any special nuclear material contained in any of the stored items. Finally, it will be necessary for Sylcor to inspect all items which are stored more than thirty (30) days, in order to ascertain whether any change has taken place in the items during the period of storage and whether they otherwise conform to warranty. A charge is provided to Article V to cover the costs of such inspection."

One has to wonder, given the clarity of the preceding explanation, whether Sylcor not only had problems with ordered fuel elements backing up at its facilities but also with payment for those elements already fabricated. This may seem trivial at this point, but later we will see that costs for Sylcor were not what they should have been.

This "Terms and Conditions of Sale" handbook seems not to have been intended for wide distribution to all prospective customers. Inside the front, paper clipped to the first page is a letter to Jim from his boss, Stan Roboff. The brochure was to be sent only to firms that had standing relationships with Sylcor; the letter says in part

"I would suggest that we limit distribution at this time to those companies and people with whom we have established a regular working relationship, so that each of these organizations will be aware of our attempt to ease and simplify our business relationships. The brochure should not be sent, as yet, to any of the companies with which we do business, or quote to, on a sporadic basis, since it is planned to enclose the "Terms and Conditions of Sale" brochure with our quotations in the future."

Now that we've looked at the products of Sylcor and some of the sales provisions and details at the time Jim joined up and which developed shortly thereafter, it's time to get back to the details of Jim's personal journey with Sylcor. And that starts next time, in installment five. 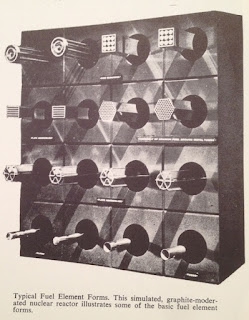 Above, Sylcor fuel element display. This display was often photographed for inclusion in Sylcor sales materials. Note that the Brookhaven elements do not have curved extensions; this is the second of two illustrations that ever show Brookhaven elements of this style. (See previous installment for details.)