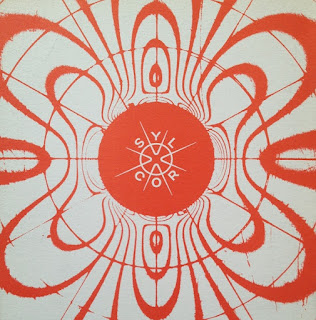 Make sure you see Part 1 and Part 2 of this story!

When Jim V. arrived in California, he didn't have much there to back him up - but he did have what appeared to be a fairly solid organization with some history backing him up remotely from the East.

Sylcor, formed in 1957 (as related in Part 1) had made something of a name for itself both by being early and by gaining a reputation for specialization in what, at the time, were called "MTR type" fuel elements - that is to say, plate type fuel elements fabricated of aluminum. Sylcor provided MTR type elements for a number of early reactors, and advertised this fact fairly heavily in the late 50's.

For a background on this early and important type of element, we turn to "Progress in Nuclear Energy, Series V: Metallurgy and Fuels, Volume 1," Finniston and Howe, Ed. and published by McGraw-Hill in 1956, from the APR library. In particular here we're interested in the first few paragraphs of Chapter 7-5, "MTR-type Fuel Elements" by J.E. Cunningham and E.J. Boyle of Oak Ridge National Laboratory:

"Prior to the termination of World War II, work was initiated at Oak Ridge National Laboratory to develop and produce a cheap, reliable, thin-plate fuel component for service in a high neutron flux reactor. This effort culminated in the successful startup, and sustained operation thereafter, of the Materials Testing Reactor at the designed 30-megawatt power level on March 31, 1952. This date was a milestone in reactor development for it not only clearly demonstrated the feasibility of constructing a high-flux research reactor, but also proved that the basic principles employed in the design and manufacture of aluminum plate-type fuel elements were sound.

The fuel elements are made of an assembly of plates.. Each curved plate contains fuel in the form of an enriched uranium-aluminum alloy which is clad on all sides with aluminum. These composite plates are spaced apart to allow water to flow freely between them, the water serving as both coolant and moderator.

Besides the Materials Testing Reactor at the National Reactor Testing Station near Idaho Falls, Idaho, there are many other research reactors operating in the United States which employ aluminum plate-type fuel elements. These include the Low Intensity Training Reactor, Bulk Shielding Reactor and the Oak Ridge Research Reactor in Oak Ridge, the CP-5 reactor at Argonne National Laboratory, the research reactors at Pennsylvania State University and the University of Michigan, the medical research reactor at Brookhaven National Laboratory, and a number of others located at various industrial and governmental research centres."

A Sylcor memorandum or handout, surely meant to be given to prospective customers, indicates some of the sales that Sylcor had achieved as of about mid-1959; 12 test reactors are listed, and mentioned additionally as 'under fabrication' are fuel elements for five others. Using this list and some Sylcor brochure illustrations, let's examine a few.

From the handout: "This reactor, a heavy water CP-5 type and designed for 5 MW went into operation July 1958. Sylcor produced 42 fuel elements of the MTR type (adaptors at both ends) for this reactor. Thirty were brazed and 12 were mechanically assembled. Both type assemblies are currently in use. This element is essentially the type employed in the Italian Ispra Reactor." 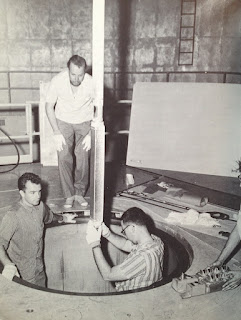 Above: From Sylcor brochure "Nuclear Fuels: Key to Reactor Performance." 'One of the MTR type fuel elements, supplied by SYLCOR, is positioned in the Massachusetts Institute of Technology Reactor, Cambridge, Mass.'

Sylcor supplied 44 swimming pool type fuel elements for this reactor, the standard element containing 10 fuel plates. The reactor went into operation in November 1957 with Sylcor elements and has been in satisfactory operation since, operating on the order of 10-15 watts. 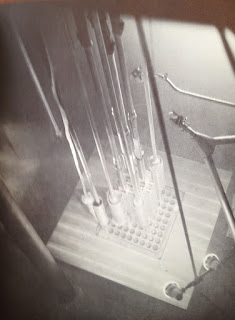 Below, a half page width graphic from the brochure "Nuclear Fuels: Key to Reactor Performance." Caption content below.

I said I'd come back to the Brookhaven fuel elements. These elements, custom designed for the Brookhaven Research Reactor, received fairly wide press in publications of the day because of the benefits they showed to the operation of the reactor. 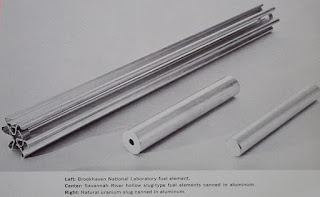 As is read in the caption, the Brookhaven element is on the top left. Each element consists of three enriched uranium fuel plates, with multiple bends applied and fabricated into a single fuel element by attaching three such plates together in a circular fashion using aluminum end rings. The plates themselves are two feet long.

To be a bit more technical - from "U.S. Research Reactor Operation and Use," Joel W. Chastain, Ed. published by Addison-Wesley for the Atomic Energy Commission in 1958, we find on page 154:

"The fuel elements are a plate type, each plate containing about 5g of U-235 in an aluminum matrix clad with aluminum. The plates, approximately 2-1/4 inch wide, 24 inches long and 0.060 inches thick, are bent along the central axis of the long dimensioin on approximately a 1/8 inch radius to a 60 degree angle. Both long edges of the plate are also bent on the same radius. Three plates are welded to a thin ring at each end to form the 2-ft. long element shown in fig 6-7 (not reproduced here at APR.) Eight elements will be used in each fuel channel of the reactor."

This may still be a bit difficult to picture - so I'll show you one. 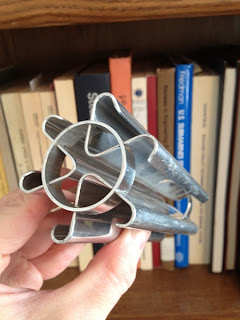 The photo above was taken today -- 8/20/2012 -- and shows an original Sylcor sample or "dummy" fuel element of the Brookhaven type in my hand. This was included in the many boxes of Jim V's materials. The construction of this type of element should now be all too clear - what Sylcor has done is to make the fairly conventional and common aluminum fuel plate work in an air-cooled reactor by making certain the elements have a great deal of air clearance. This had a number of advantages -- the power of the reactor, and thus waste heat to be removed dropped from 28 MW to 20 MW while multiplying the neutron flux over four times the original value. This lowered the required volume of cooling air, which was prodigious. This achievement, as mentioned, got Sylcor quite a bit of press - although just how Sylcor would further capitalize on this innovation for a particular reactor would have been hard to say even then, since there were few reactors of this type available for Sylcor to refuel.

Now, for the real nuclear archaeologists; there were actually TWO variants of this now-obscure kind of fuel element. The original type, probably prototypical and probably only used briefly at Brookhaven (if at all) had no curved outer extensions on the fuel plates. Only two illustrations of this rare variant can be found in all the books and papers here - both in the same early Sylcor brochure. Below, the cover of the brochure showing a number of this early variant of the Brookhaven element. 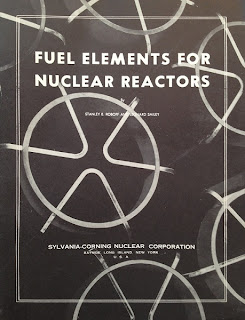 Getting back to the story of Sylcor's business ... As we've now seen, Sylcor made a serious impact in one aspect of the early nuclear fuel business, namely aluminum plate type fuels. It appeared at that time as if this kind of fuel would continue to be highly important, both in research / test reactors and possibly in power reactors as well. To be sure, Sylcor also bid on and received contracts for other types of fuel elements (the contract for PRDC to fuel the sodium-cooled, fast breeder Enrico Fermi Atomic Power Plant was a major coup) but the advertising material is more than clear on the fact that aluminum plate type elements were what Sylcor was pushing hardest - a fact that Jim's personal papers will back up later on. In the next installment, we'll see how Sylcor launched two innovative programs for the time, one of which was based on this technology, with which Jim and his other regional counterparts could court potential customers.