On this coming Tuesday, August 28, 2012, a celebration will be held to commemorate three decades of safe operation of the Angra-1 reactor plant at Brazil's Admiral Álvaro Alberto Nuclear Power Station. The ceremony will be attended by Brazil's President Othon Luiz Pinheiro da Silva as well as many other dignitaries and the top management of Eletrobras Eletronuclear, the plant's operator. The nuclear station where Angra-1 is located, abbreviated by Eletrobras as CNAAA, has two operating plants; Angra-1, which is a 'turn key' Westinghouse PWR plant rated 1882 MWt / 609 MWe net, and Angra-2, a Siemens/KWU PWR rated 3771 MWt / 1280 MWe net. This second plant was not a turn key project like Angra-1, but rather a joint effort between the German firms and Brazil. The future of Angra-3, which has been announced as a twin of Angra-2, is, at the moment fairly dim; construction of the plant has not progressed very far.

Below is a video - in English - from Eletrobras Eletronuclear on its program. Especially impressive is the presentation of how the program affects the region and the nation in positive ways. This video impressed me very much, and I'd suggest anyone interested in the discussion of how to spread positive messages about nuclear energy pay close attention to it all the way through.

Below, two more illustrations of the CNAAA. 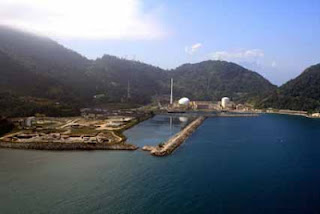 The above illustration shows the location of the Angra-3 plant under construction at the CNAAA. At present, construction is suspended. 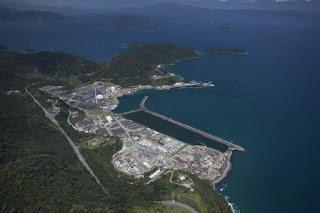 This aerial shot shows the layout of the entire station, with an especially good perspective on the location of the unfinished Angra-3 plant.

Brazil is rightly proud to herald 30 years worth of power generation from nuclear energy. While Brazil's nuclear program has been seriously curtailed in the last two years, with suspension of Angra-3 and cancellation of further plans, the CNAAA continues to provide reliable non-GHG electric power for the state of Rio de Janeiro and provides numerous cultural and educational benefits whose positive impact is difficult to quantify but easy to see.