Below is a press release from Westinghouse Electric.

In accordance with the partnership, Vitkovice will join the Westinghouse/Toshiba/Metrostav team to jointly offer as a potential fabricator of key structural and mechanical equipment modules, should the AP1000 reactor be selected to complete the expansion of the Temelin Nuclear Power Plant. The AP1000 has been designed to make use of modern modular-construction techniques, which allow many more construction activities to proceed in parallel. This reduces the calendar time for plant construction, thereby reducing the cost of money and the exposure risks associated with plant financing. These construction techniques are already being utilized with great success in the U.S. and China. This potential scope of supply represents a very significant percentage of the total plant construction.

The strategic partnership marks a further important milestone in Westinghouse's ongoing activities to develop and subsequently deliver a highly competitive tender to CEZ, for the construction of two AP1000 reactors at the Temelin site in the South Bohemian region of the country. It follows a number of important exclusive Memoranda of Understanding (MOUs) between Westinghouse and major Czech companies, notably I&C Energo and Metrostav, in an effort to establish a strong, diverse and high-quality local supply chain. This new partnership builds on existing cooperation with Vitkovice, which includes a December 2011 MOU to explore opportunities to manufacture key components.

"This strategically important partnership with Vitkovice, to fabricate and install modules for the proposed new Temelin nuclear power plants, clearly illustrates Westinghouse's deep commitment to localization in the Czech Republic. Supply development is critical to Westinghouse and that's why we think 'globally' but act 'locally.' The successful delivery of these modules will also help the power plants are built on time and on budget.

"The fabrication of these important modules in the Czech Republic also represents an excellent opportunity for both Westinghouse and Vitkovice to eventually export these components throughout Europe, in anticipation of additional AP1000 reactors being built, thereby strengthening our regional supply chain base further and providing important additional opportunities to Vitkovice and other Czech manufacturing companies."

Jan Svetlik, Vitkovice a.s. chairman of the Board of Directors and president of the Czech Machinery Cluster, said:

"VITKOVICE MACHINERY GROUP has a long tradition supplying to the nuclear energy industry, both at home and abroad, with current annual orders in excess of several billion Czech crowns. The members of the Czech Machinery Cluster are also ready to participate in new opportunities and challenges in the industry. A qualified supply chain consisting of over 3000 trained and experienced individuals is ready to participate in the opportunities from the Temelin 3 & 4 project. VITKOVICE MACHINERY GROUP, as well as all the other member companies of the Czech Machinery Cluster, has long-term intentions to participate in the nuclear industry. Vitkovice is prepared not only for cooperation in the Temelin 3 & 4 project, but also on worldwide projects."

The Westinghouse AP1000 reactor received Final Design Certification from the U.S. Nuclear Regulatory Commission (NRC) on December 22, 2011. Earlier that same month, the AP1000 was issued interim design approval in the Generic Design Assessment (GDA) process by U.K. Office for Nuclear Regulation. The AP1000 is also compliant with European Utility Requirements (EUR), confirming that it can be successfully deployed in Europe. To date, contracts for 10 AP1000 reactors have been placed around the world – four in China and six in the U.S. Construction recently commenced on four units in the U.S. after utilities there received their combined construction and operating licenses (COL) in February and March 2012 respectively. Construction on all four Chinese AP1000 units is progressing well and remains on schedule, with the first unit at Sanmen on track to produce electricity by the end of 2013.

Westinghouse Electric Company, a group company of Toshiba Corporation (TKY: 6502), is the world's pioneering nuclear energy company and is a leading supplier of nuclear plant products and technologies to utilities throughout the world. Westinghouse supplied the world's first pressurized water reactor in 1957 in Shippingport, Pennsylvania. Today, Westinghouse technology is the basis for approximately one-half of the world's operating nuclear plants, including the design and supply of over 25 commercial nuclear units across Europe.

VITKOVICE is member of the VITKOVICE MACHINERY GROUP, the most important Czech engineering group with a strong position in selected segments of machinery production and in the area of supplies of large investment assemblies. It incorporates approximately thirty companies. The group consists of a modern, extensive and unique production base, coupled with substantial know-how based on research and development. The VITKOVICE trade mark celebrated its 180th anniversary in December 2008. VITKOVICE MACHINERY GROUP is an important supplier of components for nuclear power plants. Pressurizers and steam generators manufactured in VITKOVICE serve in the Czech nuclear plants at Temelin and Dukovany, and also in other nuclear power plants outside the country, for example in Slovakia, Russia and India.

Click here to see Vitkovice Power Engineering's page on nuclear power plant components. Various photos of components and descriptions are shown on this page. The components (steam generators, or parogenerátorù, and pressurizers, or Kompenzátory objemu) are shown along with indication of the type of nuclear plant for which they were built (the older VVER-440 plant or the new, much larger VVER-1000 plant) and the location of the plant for which they were built. Temelin, subject of the recent arrangements concerning Westinghouse, has two VVER-1000 plants.

Most readers will note that the photos of steam generators do not look anything like those used in the USA, Japan, Korea or China. This is because the Soviet PWR plants by and large used horizontal steam generators which did not have a massive tube sheet and vertical tube bundles, but a central manifold type arrangement and two horizontal tube bundles. This arrangement was settled on after very early testing by the Soviet engineers indicated what appeared to be intractable problems with vertical, U-tube type steam generators; although horizontal type steam generators such as this tend to be less satisfactory in some characteristics pound for pound (including output and ability to separate steam for dry output) they have such improved corrosion resistance that most Soviet-era PWR plants (which are called "VVER" plants) were built with this style.

There were two basic widely-built designs of VVER plant manufactured by the former USSR and later Russia (sometimes with licensee assistance, such as in the example of Skoda in Czechoslovakia.) The VVER-440 plant had one reactor, six horizontal steam generators, and two turbine generators. Each VVER-440 was rated originally 1375 MWt and 440 MWe net. This design was first completed in 1971, with one unit at Novovoronezh. In the full normal production version of the design, a single nuclear power plant of VVER-440 type had four reactors and their associated plants in one installation.

The VVER-1000 plant as originally designed had one reactor, four steam generators and originally two turbine generators; later, very large single unit turbine generators were developed (after no small amount of R&D on last-stage blading problems.) The VVER-1000 was originally rated roughly 3300 MWt and 1000 MWe net. These reactors are almost always seen installed in single units like Western style plants, but of course with multiple units side by side on the same site. Again, the first unit of this type went on line at Novovoronezh, but in 1980.

From "Soviet Nuclear Power Plants," David Katsman / Delphic Associates 1986 we display two illustrations of horizontal type steam generators such as were very widely employed in Soviet / Russian PWR plants of type VVER-440 and similarly in type VVER-1000. First, a view showing the steam generator of a VVER-440 plant without the U-tubes. 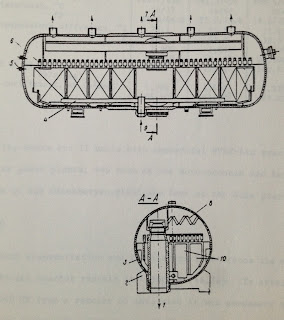 In this style of steam generator, the inlet and outlet plenums are two separate vertical cylinders built into the steam generator near the center. The many hundreds of U-tubes (normally austenitic stainless steel in most Soviet era plants) are piped to each of these, and run horizontally in each direction. "1" on the diagram's lower illustration shows the primary circuit outlet plenum path. "5" is the connection for one of the steam generator water level detectors. Right below that level is the normal high water level; the many cylindrical objects seen at roughly the height of "5" on the diagram but inside the steam generator are the primary moisture separators of centrifugal type. Baffle type separators are located above these. The five outlets on the top are the steam outlets.

Below, an illustration of a similar design which shows the U-tubes. 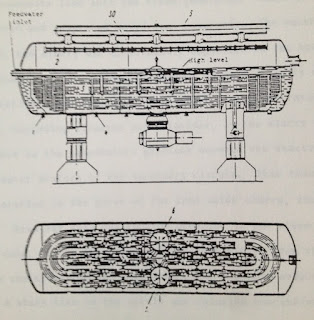 Many details of steam generator design and secondary side chemistry control are given in the volume "Soviet Nuclear Power Plants," but for sake of brevity I will just briefly detail the design principles behind these odd-looking but quite functional steam generators.

Soviet assistance with the first plant at Reinsburg, in the former East Germany, which was a PWR type plant with vertical steam generator design having a heavy tube sheet revealed numerous problems with sludge, with various types of corrosion and physical damage that the Soviet engineers felt should not be controlled or mitigated by chemistry control or by blowdown, but rather should be completely designed out. This led to the type of steam generator seen above, with vertical cylindrical inlet and outlet plenum design to which are piped the many 1Kh18N9T stainless steel tubes. This design eliminates all problems in steam generators that are directly associated with the installation of a tube sheet, vertical tubes and natural circulation internal flow (on the secondary side.) However, one fault area that both this type and the vertical type do have in common is problems with support plates, since both employ spaced support plates along the length of the tube bundles for support and alignment. Also, the vertical plenum design is itself susceptible to larger scale corrosion cracking just like the U-tubes are.

APR Note: The plants being discussed for Temelin by Westinghouse are AP1000 plants - these are the subject of the press release that leads off this post. The ROSATOM proposal is for VVER-1200 plants. The unusual appearance of the steam generators in the linked website for Vitkovice and the general recent interest in steam generators by the public as a result of various problems at San Onofre lead to my digression on the subject of horizontal steam generator design and history.