Below is a press release from FirstEnergy.

The new 12,000-square-foot facility supports overall management of activities related to maintaining public health and safety during the unlikely event of an emergency at the plant. The facility also will be used by Perry's emergency response organization during quarterly training drills and bi-annual exercises evaluated by the Nuclear Regulatory Commission and the Federal Emergency Management Agency to assist our preparedness to respond to an emergency.

"The new Emergency Operations Facility underscores Perry and FENOC's commitment to protecting public health and safety, and supports timely and efficient communications with emergency responders in the unlikely event of an emergency at the plant," said Vito Kaminskas, vice president of Perry Nuclear Power Plant.

Features of the new state-of-the-art Emergency Operations Facility include: enhanced technologies that aid in timely monitoring and collection of environmental data; a secured, online database for sharing plant conditions and other event information in real time between company, local, county and state emergency responders; updated computer equipment; and diverse telecommunications technology to enhance communications capabilities. In addition, multiple power supplies are designed to ensure the facility will not be affected by a power failure.

Located in Concord, Ohio, the facility replaces an existing Emergency Operations Facility located on site at the Perry plant.

Below, a photo from the APR collection which was distributed over ten years ago with public relations materials and plant specs. This photo shows the Perry Nuclear Power Plant, with Unit 1 nearer the camera (this is the unit closer to Lake Erie.) The other unit, Unit 2 was suspended when about 45% complete and has never been finished. 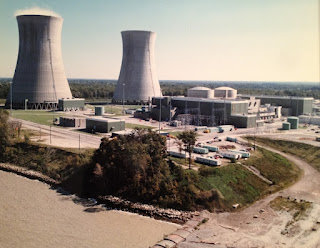 Perry Unit 1 is a GE BWR/6 reactor in a Mk III containment building. The plant was originally rated at 1205 MWe but has been uprated more than once so that, today, the plant's rating is 1260 MWe.