Atomic Power Review is proud to host the 104th Carnival of Nuclear Bloggers this week. As Rod Adams has pointed out, the marking of 104 editions means that the Carnival is at this time at the two year anniversary point. It's easy to see, given both the growing participation in the Carnival by bloggers and the growing readership that three and four and more years will easily be made. Congratulations from APR to all the bloggers who have made this anniversary possible! 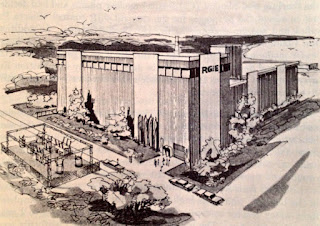 This is a piece of artwork depicting a plant pre-construction. Click to enlarge the photo, and you'll see the letters "RG&E" on the plant. Any ideas? The answer after the Carnival entries!

In the power system marketing wars, both nuclear fission and natural gas are currently labeled as “low carbon” sources of electricity. Even though nuclear fission reactors can be clean enough to run inside sealed submarines, the forces who oppose nuclear energy insist that there is enough CO2 produced in the fuel cycle and in the plant construction processes to prevent the use of the term “zero carbon” in any marketing literature.

It is time to take a page from the American Petroleum Institute (API) and start branding nuclear energy as "ultra low carbon" power.

We need to emphasize the difference between an average nuclear plant lifecycle emission 17 grams/kilowatt-hour and a minimum of 400 gms/kilowatt hour at a plant burning natural gas.

The situation at San Onofre is getting worse. First, Ron Litzinger, President of Southern California Edison (NYSE:EIX), which owns and operates the twin 1,100 MW nuclear reactors, told California's electricity grid operator Unit 2 may be back online by June 1 and Unit 3 up by June 12.

Second, that announcement brought a response in the form of a terse statement from NRC Chairman Gregory Jaczko who said the utility has not submitted any documents for the agency to review "so any discussion of a date for the restart of Unit 2 or Unit 3 is clearly premature."

Third, Rep. Darrell Issa (R-Calif), who's district includes the shut down reactors, released a letter raising the question of whether Jaczko lied to the House Oversight Committee last year. The timing of the letter is not a coincidence.

Once upon a time an ailing king abandoned one of his castles. He said it was too expensive to keep up more than one court. Besides, the peasants weren’t bringing in the sheaves, which made the whole kingdom’s economics shaky.

Then a new king arose, who was wiser in the ways of castle upkeep.

“We can reopen the closed court,” he boasted, “and for half the price of building a new one!”

Except things have not exactly worked out that way for TVA at Watts Bar 2.

As an aside, APR has a press release on San Onofre available HERE.

Click here to get to The Hiroshima Syndrome - Fukushima Accident Updates. Two updates as delineated below.

1. (May 11) Apocalyptic fantasy gets headlines in Japan - Gundersen and Alvarez' speculations of world-wide doom from F. Daiichi's #4 SPF haave garnered headlines with Japan's #2 newspaper, Asahi Shimbun. The Asahi summarily rejects Tepco denials because they are less trustworthy than politicians (you read that correctly!). I argue that since former PM Kan has resigned and his mandate of all Tepco communications coming through his office has gone away with him, TEPCO's communications have essentially stood the test of time.

2. (May 9) Get it right, for crying out loud! - A Mainichi Shimbun editorial (Q&A format) has some serious number problems. Their decay heat estimates (% of full power)are too high by as much as a factor of 20. They owe it to their readers to post a correction...which they probably won't.

China plans to have a 5 megawatt (MWe) thorium molten salt reactor by 2015.

The China Academy of Sciences in January 2011 launched a program of R&D on thorium-breeding molten-salt reactors (Th-MSR or TMSR), otherwise known as Liquid Fluoride Thorium Reactor (LFTR), claiming to have the world's largest national effort on these and hoping to obtain full intellectual property rights on the technology. A 5 MWe MSR is apparently under construction at Shanghai Institute of Applied Physics (under the Academy) with 2015 target operation.

The Navy is funding EMC2 an additional $5.3 million over next 2 years to work on the problem of pumping electrons into the Polywell. Big new pulsed power supply to support the electron guns (100+A, 10kV). WB-8 has been operating at 0.8 Tesla (8 times stronger magnetic field than any previous version).

Jim Hopf at the ANS Nuclear Cafe assesses the pros and cons of H.R. 1280. This bill being debated in the US House of Representatives would impose similar conditions on future "123 agreements" (concerning transfer of nuclear technology) as in the recent 123 agreement between the US and UAE (i.e., foregoing all rights to enrich uranium, to reprocess spent nuclear fuel, etc.).

Would H.R. 1280 be good policy? The debate has significance since several more 123 agreements will be considered in the near future with nations such as Vietnam, Jordan, and possibly Saudi Arabia. Some of these nations (e.g., Jordan) have significant uranium reserves that they may desire to exploit someday, which may make them reluctant to give away any future enrichment rights.

"Replacing nuclear with wind power: Could it be done?"

Many people would like it to be theoretically possible to replace nuclear power with wind power. Could an intermittent source [wind] replace a baseload source [nuclear] for producing electricity?

Margaret attended an NRC public meeting on construction of a laser enrichment facility, and describes in detail her reactions to what went on - and it seems she was pleasantly surprised!

"Too Cheap to Meter"

At Nuke Power Talk, Gail Marcus recaps the history of the phrase "too cheap to meter" that has haunted the industry for so many years. She was spurred to write on this topic this week by her husband, Mike Marcus, who writes a blog on telecommunications issues. After their recent stay in a hotel in Phoenix where they had free long-distance phone calls, Mike concluded that maybe Lewis Strauss should have said that telecommunications would become too cheap to meter! Gail links to Mike's blog so the historical evolution of pricing in the two industries can be contrasted.

The Vermont legislature has gone home for the year, but managed to have some stunning reversal about energy before it went home. The Vermont legislature was about to pass a law ordering the Public Service Board (PSB) to make sure certain money went to the ratepayers in an upcoming utility merger. Governor Shumlin objected. He claims that the legislature should not intervene in an open PSB docket or it would be overstepping its bounds. Meredith Angwin notes that in 2010, Shumlin used a legislative vote to prevent the PSB from granting a Certificate of Public Good to Vermont Yankee. She has some cynical things to say about how Shumlin lines up his legislative ducks.

That does it for this week's Carnival entries. All that's left is to tell you what that was you saw at the beginning!

The illustration I presented was an initial sketch design showing the exterior of a High Temperature Gas-cooled Reactor (HTGR) which Rochester Gas & Electric proposed to construct in the state of New York. The design was submitted as a proposal to the AEC in response to a February 1964 request for proposals for a variety of advanced reactor designs, including high temperature gas cooled reactors. RG&E proposed to construct an HTGR plant as shown at a site about 19 miles east of Rochester, New York - the other participant in the proposal was the reactor vendor for the plant, namely the General Atomic Division of General Dynamics Corporation. The plant was to have produced 260 MWe; under the proposal General Atomic would furnish the entire power plant and all the nuclear fuel - surely the ultimate in early nuclear power era "turn key" contracts.

This plant was never built. Details of the cancellation are not clear, but what is clear is that in 1965 RG&E ordered a two loop pressurized water reactor plant from Westinghouse for this same site, rated 420 MWe. The plant received a construction permit from the AEC in April 1966, and received its operating license in September 1969 at a total cost (according to WASH 1174-71) of roughly $65 million. The plant remains in operation today. Below, from APR's files, an old original post card view showing this plant - the R. E. Ginna Nuclear Power Plant - as it looked near the time it was built, with visitor center visible as well. 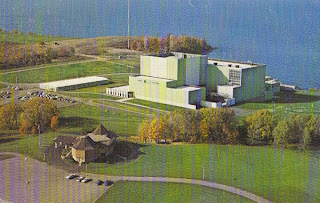 Ginna is fairly unique (for PWR's) in that the reactor containment is surrounded externally, separately by a facade that makes the profile match that of the rest of the building from ground level - but the containment can be seen inside the squared walls easily in this view.

That does it for this 104th / Two Year Anniversary Carnival. I hope you've enjoyed it.