Sylvania Electric Corporation formed an Atomic Energy Division at the beginning of 1952 as a result of a December, 1951 contract with the Atomic Energy Commission to construct and operate what was described as a pilot or test plant for the manufacture of nuclear reactor fuel elements, including a metallurgy laboratory facility. The initial operations began at Bayside, New York, but another site was acquired in early 1952 and was located in Hicksville, New York. The facilities at Hicksville were greatly expanded with the addition of a new plant in 1957 expressly built for manufacturing of nuclear reactor fuel elements for commercial sale (and intended for use in research, test, training and power reactors.) Headquarters for the company remained at Bayside, New York.

Below, an illustration of the Hicksville N.Y. Commercial Production Plant of the Sylvania-Corning Nuclear Corporation; taken from "You and Your Company" brochure issued to welcome and familiarize new employees, circa 1957. 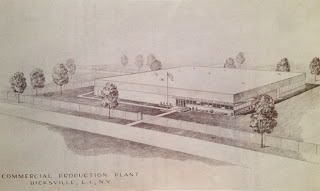 Sylvania Electric, as mentioned, had begun dedicated nuclear fuel research work for the AEC in early 1952. The opening up of the market (which I will cover in detail in a different post on Westinghouse Atomic Power Division) for commercial fuel fabrication led to Sylvania Electric and the Corning Glass Works combining all previous nuclear related operations of both into the Sylvania-Corning Nuclear Corporation in March, 1957. This development was, as we can see, concurrent with the acquisition of more land at Hicksville and the construction of the new Commercial Production Plant illustrated above. Syl-Cor or Sylcor, as the new firm quickly became known, was positioning itself to move into nuclear fuel production in a major way.

The text below is from the Sylcor sales brochure titled "Development and Engineering - Nuclear Fuels and Components" and which appears to date to about the time the Commercial Production Plant was placed in operation:

In April of 1957, Sylvania Electric Products Inc. and the Corning Glass Works combined their atomic energy activities and formed a new and separate company - the SYLVANIA-CORNING NUCLEAR CORPORATION (SYLCOR). This new, jointly owned entity is a logical and carefully planned outgrowth of the pioneering work of both companies in the nuclear field, and affords a far more effective utilization of skills and facilities.

SYLCOR has a wealth of experience in high temperature metals and in the development and production of metallurgical, ceramic and cermet types of fuel elements. SYLCOR pioneered investigations in the field of high temperature metallurgy and high purity metals. Development programs have been conducted with stainless steel, aluminum, uranium, thorium, niobium, niobium base alloys, rhenium, tantalum, tungsten, molybdenum and zirconium - resulting in a number of significant contributions to the technology of nuclear energy.

SYLCOR's prime objective is to provide a single economic source for complete out-of-pile services to designers, builders and operators of nuclear reactors. SYLCOR is a leader in new fuel and recovery developments, in the manufacture of reactor fuels and components, in providing a wide range of engineering facilities, and in making available the services of one of the largest privately-owned engineering, development and manufacturing plants devoted to this field.

SYLCOR has participated in a large number of major reactor projects both in the U.S. and abroad and has already produced more nuclear fuel elements than any other commercial facility in the free world. (Italics in original.)

As we can see, Sylcor had some fairly impressive research work behind it, had been able to produce fuel elements fairly early in the game commercially, and had been fairly early in the game in the construction of large facilities to service the just launched era of commercial nuclear generating stations (although it did certainly have competition - very stiff competition - in the field.)

We will see later that the sort of image portrayed by the above quoted advertising copy was actually fairly far from giving a complete picture. The operation at Sylcor was not nearly so commanding in the field as pictured - and the actual internal operations of the company not nearly so industry leading.

It is right after the launch of Sylcor and the large expansion at Hicksville for commercial fuel production in earnest that our featured man in this story, James O. Vadeboncoeur, enters the picture. I have acquired a large library of information from the late Mr. Vadeboncoeur (referred to often in interoffice correspondence as JOV, which seems handier given his last name) and it is around his experience with this company that we find ourselves able to build an inside story of the day to day operations, considerations, problems and competitive angles of the early commercial nuclear fuel industry.

Prior to hiring on with Sylcor, Jim V. (as we'll call him) worked for Westinghouse Electric Corporation's Atomic Power Division from 1952 through 1957. He was employed in Nuclear Core Manufacturing, and papers from that portion of his career give great insight into the early days of reactor manufacture (again, these are the basis of a different recurring feature.) Let's look at one of Jim V.'s resumes for his own words on his Westinghouse experience, just in brief:

Manager's Staff - Direction and consultation in the development and operation of industrial facilities for the manufacture of nuclear power reactors. Emphasis placed upon capitalization, buildings and layout, personnel requirements, criticality and accountability control, and processing equipment.

Supervisor of Central Production - Production supervision of manufacturing for the Nautilus and other reactor cores. (APR note: Many other cores.) Direction of scheduling, dispatching, inventory and production control, personnel placement, and industrial engineering. Design and implementation of cost control system. Preparation and control of manufacturing budgets. Administration of multi-million dollar contracts for melting and fabrication of zirconium. Preparation of cost analyses, advanced planning, and economic studies relative to facilities, personnel, and material requirements for nuclear fuel manufacturing.

SYLCOR made a fairly grand coup, it would appear, in somehow luring Jim V. away from Westinghouse - and unfortunately Jim's papers are totally completely silent on just exactly how this occurred. Luckily for us this is the only major event in Jim's Sylcor career that the papers don't elaborate on, and there's quite a story to tell. That's because Sylcor didn't hire Jim to run its core manufacturing operation, or control its costs, or manage its metallurgical laboratory - all sorts of things that Jim was perfectly suited for and could likely have helped Sylcor with. No; Sylcor had a totally different job in mind for Jim, the professional nuclear core manufacturing supervisor; the metallurgist; the chemist (for he was all of these.)

Sylcor hired Jim to travel far from its New York operations - to travel to California to start from scratch a Western sales office and staff to broaden its competitive situation from mainly an industrialized East-coast operation to a truly national one. And it would be rocky right immediately from the start.

Next time: Jim finds himself in California without his family, without a house, and without an office. Yet.