Atomic Power Review catches up on two of this week's developments, and offers some background as well.

NEW BOOK: My friend Leslie Corrice has just announced that his new book, "Fukushima: The First Five Days" is now ready for purchase and download. Find the book here. This volume is a highly readable account of the accident at Fukushima Daiichi following the tsunami, taken from various official sources but developed and presented in a manner that makes access to the chain of events possible for even the layman. I believe it is a very significant opening dialogue for the general public in terms of the public becoming conversant with the actual event sequence.

WESTINGHOUSE, BABCOCK & WILCOX, ETC. This week was somewhat significant in terms of news in nuclear energy because the news was of a corporate and not a safety related nature (for the most part), dominated as it was by the shakeups at Westinghouse Electric which culminated in the CEO of that firm resigning two days into his tenure only to sign immediately with competitor Babcock & Wilcox. Click here to get up to speed on these developments.

What is more interesting perhaps in the long run (for it cannot be anything but true that Westinghouse parent company Toshiba will not allow this to affect business in any meaningful way) is the fact that we now find Westinghouse and Babcock & Wilcox in direct competition for what just might be a very hot ticket - the Small Modular Reactor market. These are light water cooled reactors that are built in compact and shop-assembled form and which are easy to install .. or at least, are much easier (and cheaper) to install than a conventional plant, such as the four Westinghouse AP1000 plants being built here. These plants are at the moment generally less than 225 MWe and might be ideal for military installations, small co-op electric utility companies, multiple installations together for generating where the additive cost for the required MWe output is still less than one large plant, and probably more. What many people might not know is that these smallish plants aren't new at all - not totally.

Just briefly, we can mention the fact that very early on the United States Army and the United States Air Force were interested in small nuclear plants for various remote installations. While all of these early plants did not really fit the SMR description as we know it today (modern SMR plants have all components, including steam generators and coolant pumps inside a compact primary containment) they were much smaller than commercial or even most experimental plants in the early days. Let's take a look at just a few illustrations from the APR collection showing some early small plant components. 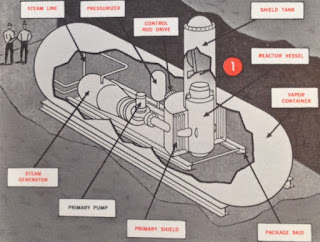 Above, from a 1959 ALCO Products ad, we see a representation of that company's design for packaged power plants of the general type supplied to the AEC/Army as the APPR-1A, later known as SM-1A. This plant supplied just over one and a half megawatts of electric power, but also significantly just over 11 MW of thermal energy (steam heat) for arctic facilities. A number of early small designs such as this were dual-output plants. Note the size of the primary plant components when compared with the human figures outside the containment. 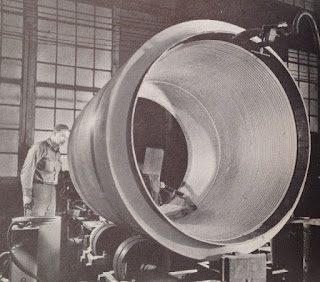 Above is a reactor pressure vessel for one of this general size range reactor plants at ALCO's facility undergoing the process developed at ALCO whereby stainless steel was overlaid on a (mandrel) forged, seamless carbon steel pressure vessel, and then submerged-arc welded to the surface to provide corrosion resistance on the interior (i.e. the surface in contact with primary coolant.) The smallish size of the vessel is quite evident. This is from the same multi-page ALCO advertisement as the illustration shown above. ALCO was either reactor vendor and contractor, or else reactor vendor, for several early small sized PWR reactor plants.

The Martin Company (Nuclear Division), later Martin-Marietta was also active in supplying and advertising small pressurized water reactor systems. Below, the MPR or Martin Power Reactor which was a flexible core design allowing anywhere from 8 MWt to roughly 24 MWt and which could be ordered to develop from 1 MWe to 5 MWe plus steam heating. Martin offered just the reactor, or the whole primary system as seen below (constructed underground to avoid construction of costly shielding) or an entire plant. 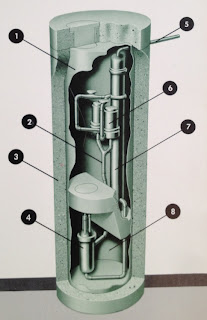 It is clear from this illustration that the overall plant is very compact; this is a step along the way from early small nuclear plants with discrete components widely spread toward the much more economical designs that move all components possible into the containment and later all possible components into the (now expanded) reactor pressure vessel. Below, the MPR reactor itself showing the single center and three 'eccentric' control rods, and the boxed fuel elements that each contain 50 tubular fuel rods.

The offering described above (seen in a Martin sales brochure for the MPR product line) is similar in many ways to the plant actually built as the PM-1 for the Air Force and which was installed at Sundance, Wyoming. Below, an illustration of that plant from the Atomic Energy Deskbook (Hogerton, 1962.) Note the similarity, generally, of the primary plant components. This plant was rated at 1 MWe with 2 MW of steam heat additionally. Below, also from the Atomic Energy Deskbook, a view of the zero power core mockup for the PM-1 reactor. The scale is evident and the compactness notable. 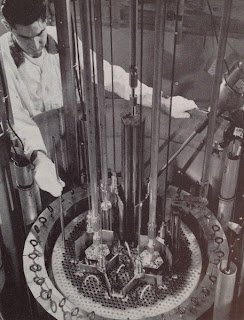 Now that we've seen some of the early small plants ( a few of which indeed did have some modular construction) it is important to point out that in terms of the modern competition in this new small reactor market, the two competitors aren't new to this market at all. Westinghouse had its start in compact, highly enriched Uranium fueled pressurized water reactors with the STR project (the plant for the USS Nautilus) - that's as "at the start" as it gets. Babcock & Wilcox actually developed what we might consider the first true SMR very early on, as a result of lessons learned from the large plant designed for the NS Savannah. After that plant was built and operated, Babcock & Wilcox began studies on truly modular and self-contained pressurized water plants of an exceedingly compact nature. This first range of designs was known as the CNSG (Consolidated Nuclear Steam Generator) plant design; according to STEAM (Babcock & Wilcox 38th ed. 1975) the CNSG I plant design was developed in 1962. A modification of this design was actually built and was installed in the German nuclear merchant ship OTTO HAHN, which went to sea on trials in October 1968. This reactor was rated 38 MWt; the shaft horsepower output for propulsion was 10,000 SHP, and two 450 KW turbine generators to supply electric power. By 1975 a modified CNSG III was being offered by Babcock & Wilcox with further alterations, simplifications and improvements. By 1980 Babcock & Wilcox, in cooperation with United Engineers & Constructors was offering a land based plant it called the CNSS or Consolidated Nuclear Steam Supply system, which was a 400 MWe PWR plant based on the plans originated under the CNSG programs of earlier years. (This soon became Babcock & Wilcox's sole offering when it ceased accepting new orders for large conventional central generating station type PWR plants.)

Information about the current Westinghouse SMR offering is found here.

Information about the Babcock & Wilcox / Bechtel "Generation mPower" SMR can be found here.

Readers can be certain that APR will keep an eye on the competitive situation (both are going after DOE funding for the SMR projects) and report developments here.