Palisades post-hearing, and more on embrittlement

As we all probably expected, the NRC hearing on Palisades went off last night with the NRC assuring the attendees that while there are significant personnel related (and that really means procedural, or else "safety culture") issues and opportunities at Palisades the plant is safe to operate. The NRC assured everyone that if Palisades were not safe, it would not be on line.

Click here for a brief locally written roundup on the NRC hearing.

In relation to my previous post on Palisades and the issue of pressure vessel embrittlement and the threat of PTS or Pressurized Thermal Shock, I received today a fascinating e-mail from A. David Rossin, a former President of the American Nuclear Society who actually was at work for around a decade at Argonne National Laboratory studying the neutron embrittlement of reactor pressure vessels.

Dave tells us that back at that the issue of PTS only seriously first came up toward the end of the 70's. He says that some of the very earliest theoretical data (and this has to be from the 50's or 60's I would guess) was proven inaccurate in its assumptions, so that he and a number of other people really got the ball rolling on new research. When the research was in full swing a number of the major national laboratories involved in nuclear energy research were involved, including Oak Ridge and the Naval Research Laboratory among many others. Still, with only a few large computers in the country at that time, highly complex and involved calculations were not easy - and the limited time that any of the computers was available for a specific job didn't make things any easier.

Later on, in the early 1980's (as I mentioned in my previous post) a new wave of work began to more closely estimate the real effects of neutron damage to pressure vessels far more accurately than before - and Dave was in on this again. (It is important to note that until then, and in fact until now in 2012, no reactor pressure vessel - no matter how old - has ever failed in a brittle fracture mode, nor has any failed in a PTS environment.) What Dave relates as the end of this span of serious research was a very conservative rule set by the NRC that satisfied everyone in terms of protection against embrittlement damage and failure.

Also, according to Dave, and very interestingly, there was evidence that the actual service these reactor vessels were performing was actually essentially annealing them while in service; that is to say, the heat was high enough that the vessels self-annealed and essentially removed the damage. Most of the new research stopped around 1985 as a result of this discovery and the NRC's conservative approach. The fact that no vessel had still ever failed at that time gave weight to the safety of the assumptions at that point - but irradiation samples continued to be used and tested, and continue to be all the way through, non-stop, until today. 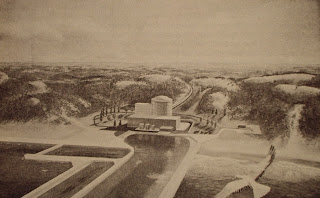 Now, when we discuss embrittlement of reactor vessels what we are talking about is a slow alteration of the material's physical qualities, such that the material would behave in a more brittle (likely to shear along crystalline lines) and a less ductile (likely to exhibit a rough tearing effect) type of failure when stress is applied which is high enough to cause the material to fail. More important though is the fact that the temperature at which the material transitions from a ductile material to a brittle material continues to go up as the material is exposed to radiation - in this case, neutrons.

I mentioned in the previous post that the over-simplification that neutrons are blowing holes in the metal is too simple. At low energies, neutrons might displace one or two atoms at most. At higher energies, they might displace more - and at really high energies, they might cause a scattering effect that displaces an equivalent to perhaps several thousand times the volume of one atom. But as Dave has now told us, this damage can be removed by the annealing effect of the heat that the vessel is exposed to in normal operation.

Annealing as a deliberate method - in other words, removing the reactor core and internals and artificially applying heat from, say, an electric source - has only ever to my knowledge been performed once on an actual reactor vessel in service (SM-1A, a small PWR at Fort Greely, Alaska which was contracted to Peter Kiewit & Sons who subcontracted the reactor to ALCO Products, Inc.) although the West Germans did construct an entire apparatus for use in 600 MW pressurized water plants; their research showed that (for the specific metallurgy of the vessels in question) an application of 450C for 60 hours would recover the damage from neutron embrittlement. According to ASTM STP 819 the effort required to anneal even the small pressure vessel of SM-1A was considerable from an engineering standpoint.

For a reactor plant which is considered to have an embrittled reactor vessel, there are a number of measures that can be taken; after all, the metallurgy of vessels now in service represents a coverage of many years' worth of manufacturing, during which new discoveries were made all the time which improved the vessels' performance. Some measures that can be taken to mitigate the embrittlement are:

-Move active fuel elements away from the vessel; use partially burned elements at the outside of the core, or dummy elements, thus reducing neutron exposure
-Establish automatic limits to heating up and cooling down the plant to keep within operating curves (thus avoiding operator error)
-Insert poison rods, or else neutron shields, outside the active region of the core but inside the vessel to reduce neutron exposure

There are many other things that could be done - and sometimes, nothing is required if testing shows that a vessel can still safely operate in its previous operational limits. The above are merely a few suggestions from several sources consulted here.

What is most important for the outsider to understand is that an incredible amount of effort has actually been devoted to the study of neutron damage to reactor materials for half a century, and that standards have NOT relaxed; rather, research and many kinds of testing of actual reactor materials have shown both that by and large the original conservative metallurgical assumptions have proven highly protective, and that modification of operational limits and/or core arrangement and material can extend reactor vessel life far beyond that originally conceived. This is one case where design from decades ago has held up in intensive service.

Thanks to A. David Rossin for his wonderful input and experience.

-TOWARD IMPROVED DUCTILITY AND TOUGHNESS. The Iron and Steel Institute of Japan / The Japan Institute of Metals / Climax Molybdenum Development Company (Japan) Ltd. 1971