Unit 3 at California's San Onofre Nuclear Generating Station has experienced a primary to secondary leak in one of its steam generators. This kind of failure cannot be described as everyday or commonplace to the point of normalcy, but this kind of failure does happen frequently enough that there are widely known and standardized procedures to deal with it. This type of failure usually results in plugging the U-tube or tubes if multiple which are leaking in the steam generator. Since each generator has many thousands of tubes, plugging several or even dozens does nothing to the heat transfer from the primary to secondary and in no way makes the plant any more dangerous than it was before the leak occurred. Many plants have operated with dozens or hundreds of plugged steam generator tubes for many years.

Here is the text from the official NRC report:

"At 1549 PST, the leak rate was determined to be 82 gallons per day. At 1610 PST, a leak rate greater than 75 gallons per day with an increasing rate of leakage exceeding 30 gallons per hour was established and entry into S023-13-28 'Rapid Power Reduction' was performed.

"At 1800 PST the affected steam generator was isolated."

All control rods fully inserted on the trip. Decay heat is being removed thru the main steam bypass valves into the main condenser. Main feedwater is maintaining steam generator level. No relief valves lifted during the manual trip. The plant is in normal shutdown electrical lineup.

Unit 2 is presently in a refueling outage and was not affected by this event.

San Onofre 3 is a Combustion Engineering pressurized water reactor. The containment style at this plant is dry, ambient.

There are now reports circulating fairly widely that NRC officials have noted excessive wear on a number of the steam generator U-tubes in San Onofre Unit 2, which is presently shut down for refueling. Clearly, with a tube rupture or leak having occurred in identical equipment while at power on the same site, a much deeper investigation will take place.

There are reports circulating that "a radiation leak has shut down the San Onofre nuclear plant." The cause of the shutdown was a primary to secondary leak, not a "radiation leak," whatever that is. There are reports that a small amount of radioactive material in gaseous form may have been released to the atmosphere. I am continuing to look into this - but NO threat to the public exists.

The plant is shut down, and the affected loop is isolated from the reactor. 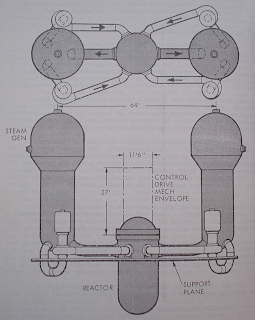 Here is a view of a typical Combustion Engineering pressurized water commercial nuclear plant primary system - called typically the NSSS or Nuclear Steam Supply System. In the large steam generators seen at the sides, heat is transferred from the primary coolant (circulated through the reactor by large pumps, clearly visible) into the secondary water as the primary water passes through many thousands of small diameter tubes. On the outside of these tubes is the secondary water, which boils, turns to steam, and then powers the turbine generator and other plant equipment. If a primary to secondary leak occurs, then, it is possible for some radioactive material to enter the steam plant.

Having said this, ALL steam plants at nuclear stations are designed with this eventuality in mind and primary-secondary leaks through small holes, or even tube ruptures, have occurred many times before. When controlled properly (as at San Onofre) there is no risk to the reactor, or its cooling or monitoring.