It is time to make a brief update on two items of interest which have been brought up by certain media and which are now gaining traction in other outlets.

Below we see a fresh graphic from Tokyo Electric which indicates the location of the three temperature instruments, as well as a graphic showing the rise of just the single parameter as compared to the other two. 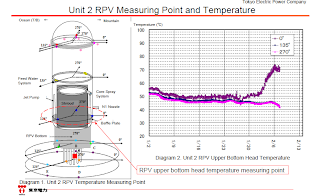 Tokyo Electric has been monitoring the rise of this single parameter for some time now. No other parameter changes of note have occurred. For example, gas sampling of the containment at 1F-2 has shown no alteration of note. Tokyo Electric has been adjusting injection flow rates at all three damaged reactors for some time now in order to optimize temperature control vs. buildup of contaminated water; TEPCO has also been making some alterations in systems involving injection water sources and backup pump availabilities. TEPCO's opinion at the beginning of this trend was that one of its flow alterations (variance between feed ring flow rate, and core spray flow rate, as well as total overall flow rate) had caused some sort of flow rearrangement (this is only a paraphrase) which allowed an alteration of temperature at the one location.

This writer's first suspicion is a progressing failure of the single temperature instrument. Barring this, it is conceivable that some disarranged portion of the internal structure of the reactor itself may have moved, causing the difference in temperature indication. For example, if part of the core further collapsed against the lower RPV head, this could conceivably be possible - however unlikely it is. It is also conceivable that any volume of accumulated, solidified salt from the time period early in the accident during which salt water was being injected may have moved, causing a similar indicated event.

Having said all of that, there is no indication at the moment that any sort of increased risk exists as to further core damage, release of material, or recriticality. Even though this last mentioned possibility is exceedingly remote, TEPCO has, on Feb. 7th, injected boron into 1F-2 reactor as a wholly precautionary measure... although I should point out that at least once TEPCO has injected boric acid in an attempt to help cooling by dissolving perceived accumulated salt deposition.

I will continue to monitor this situation and report on it as needed - but for now, the hyperbole of the main website in question (which I won't grace with a link) seems highly unfounded.

The second overall Fukushima Daiichi concern is just a repeat of an earlier one; there is a thought that 1F-4 is in danger of collapse. The spent fuel pool of this plant was supported by steel girders, during a large construction project post-accident by TEPCO, and that space surrounding the girders filled with concrete, so that the spent fuel pool is now resting on a giant steel reinforced concrete monolith. Further, TEPCO is using giant cranes to remove debris and structural material (and, thus, considerable mass) from the tops of the damaged reactor buildings at 1F-3 and 1F-4 so that the risk of any collapse is further reduced. This "fresh" risk is also thus not fresh at all; TEPCO has no present concerns about this eventuality.

As stated before, if anything develops further at Fukushima Daiichi, you can be sure it will appear here.