This week ATOMIC POWER REVIEW is proud to present the collective work of the world's leading pro-nuclear bloggers, with the return here of the rotating CARNIVAL OF NUCLEAR BLOGGERS. This weekly feature rotates between a volunteer list of pro-nuclear blogs and always showcases the best and brightest of those people who dedicate their time and effort to write about things nuclear. I strongly recommend to my regular readers world-wide a good review of all of the Carnival posts if they don't already do so every week.

As has become the established custom here at Atomic Power Review, I do not generally make one of APR's posts also a contribution to the Carnival. This is not by any means a cop-out, because I spend a considerable amount of time and effort attempting to stump literally thousands of nuclear professionals with very rare and sometimes completely unidentifiable illustrations of things nuclear preceding each Carnival; I then explain whatever 'that contraption' was after the Carnival. February 4, 2012 and Carnival No. 90 will be no exception.

Click the picture below to enlarge it - you'll need to if you wish to have any hope of guessing "What is this?" 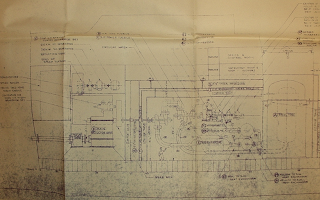 The answer and much more after the Carnival.

Many investors – large and small – that believe in nuclear energy and its potential to dominate the energy market want to find a diversified “pure play” where they can focus a portion of their portfolio. (Note: a diversified “pure play” on the technology would provide some protection to the fund from the risk of any particular project being mismanaged.) If the structure was a mutual fund, the size of the required investment could be well within the reach of anyone who buys stock funds for their retirement plan or their children’s college saving funds.

Two fast moving stories caught people by surprise this week. First, the Salt Lake City Tribune reported that a key investor in the privately-held Blue Castle nuclear reactor project was being investigated by the Securities & Exchange Commission for alleged fraud. Second, The Tampa Bay Times reported that Progress Energy (NYSE:PGN) had cancelled its EPC contract with The Shaw Group throwing the future of the twin reactor project into serious doubt.

It turns out there is a lot more to the rest of the story in both cases. The good news is that despite the startling nature of the reports the facts did catch up with them.

Back to the Public Service Board: Next Steps for Vermont Yankee

The recent ruling in the Vermont Yankee court case invalidated several laws that the Vermont legislature had passed in order to close down Vermont Yankee. Now, without those laws, the Vermont Public Service Board (PSB) must rule for continued operation of the plant. PSB permission was required in the original contract when Entergy bought the plant.

This post at Yes Vermont describes the implications of the judge's ruling for PSB deliberations. It also critiques some articles about the judge's ruling. An AP article is mostly a collection of quotes from Ray Shadis, a nuclear opponent. A Burlington Free Press article gives a fuller story.

Often the case is made of the vast natural resources for renewable sources to tap into for electricity generation, often with the implication that such sources can displace baseload (and in particular, nuclear). Actual numbers of course are often a stranger to such conversations. In an effort to combat such widespread innumeracy, Steve Skutnik at the Neutron Economy lays out the answer to the question, "Just how many windmills would it take to replace one nuclear unit?" The answer: a lot.

China will likely be approving only three or four projects each year from 2012-2015. This will be 12 to 15 reactors in the remainder of the five year planning period. The country had been accelerating its nuclear development since 2008, with 14 reactors approved in 2008 and six in 2009.

The slowdown will effect the number of nuclear reactors that come online in the 2016 to 2020 period. The reactors under construction and the backlog of approvals will be for reactors that will be built by 2015. China should still have about 40 reactors and about 40 Gigawatts of nuclear power by 2015. Then China could slow to about 60-70 Gigawatts by 2020. I expect a return to more in reactor approvals to occur before 2015. In the meantime China will ensure that any generation 2 reactors get generation 3 safety improvements. They will also increase the percent of the reactors that are produced domestically.

Los Alamos is working on a minirailgun system for nuclear fusion

Paul Bowersox sends us the ANS NUCLEAR CAFE article of this week, written for the ANS blog by WES DEASON.

Plutonium in Space: Why and How?

APR note: Wes looks to be one of the bright new stars in the nuclear energy field! I would imagine we'll be seeing a lot more from him in the future in many ways.

Fuel from the Middle East: A Sense of Deja-Vu

The unstable situation in the Middle East reminds Gail Marcus of the disruptions caused by the oil embargo of the 1970s. Between the Middle East and the cutoffs of natural gas from Russia that they've observed more recently, Europe is trying to enhance their ability to share energy resources in case of future supply disruptions. This is a step in the right direction, but of course, it doesn't create new energy.

And that does it for all of our Carnival features for the 90th weekly edition. The only thing left is to tell you what that assemblage of equipment shown earlier represents.

The illustration I presented earlier is actually only about one quarter of a large blueprint which illustrates a gas cooled, closed cycle, direct drive marine nuclear power plant. This is an exceedingly rare illustration, which comes from a set included with a copy of 'Study Contract MA 1252 - for 20,000 SHP Nuclear Propulsion System for Tanker" which was produced by the Research Staff of the General Motors Corporation and which is dated April 1, 1957.

Many people are somewhat familiar with the nuclear powered NS Savannah, which incorporated a Babcock & Wilcox pressurized water reactor plant. Most are not aware that a very wide project which began slightly earlier called the Maritime Gas Cooled Reactor program was carried out, and which produced no sizable working hardware.

A number of companies contributed detailed design proposals to the AEC and Maritime Administration for this project. General Motors' project is shown in this drawing, and is seen in overhead view below in a portion of the same blueprint. Click to enlarge - very large! 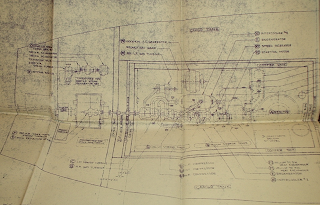 The "General Intent" portion of the report reads as follows: "This is a final report on a "Contract for Design Service" made and entered into as of the 13th day of September, 1956, with the objective of furnishing to the United States Department of Commerce, Maritime Administration, an optimum design of a 20000 SHP closed-cycle, gas turbine system with a gas-cooled reactor for installation in a 38,000 ton D.W.T. tanker."

The drawings and plant layout were performed by the Cleveland Diesel Engine Division of General Motors. This was the GM division responsible for the many thousands of successful Model 248, 278 and 278A diesel engines which powered roughly half of US submarines during the Second World War. This may be a bit surprising, so here I'll show the detail block from the blueprint. 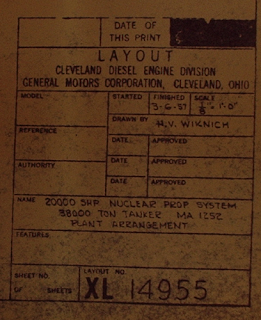 Some of the plant characteristics are as follows:

Many other details and considerations are contained in the report; I am sure I will present these here or elsewhere later on.

As an interesting aside, some people are surely aware that this was not the only proposal of note in the MGCR program. Many other proposals were developed; some only reached the marketing stage with few meaningful details worked out, while others were as fully designed as the GM design was. Let's glance at two others as shown in documents I have here. 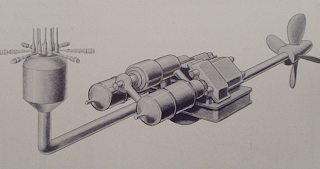 Above is a simplified view of a closed cycle gas turbine nuclear plant as designed by American Turbine Corporation. The sales brochure for this equipment gives some details, but not many:

Other views are given, and these will also appear somewhere later on.

Manufacture of this plant would have been complicated, if the brochure is to be believed. American Turbine Corporation lists itself as a licensor to Escher Wyss, Ltd. of Zurich Switzerland who, it is stated, had extensive experience with fossil fuel heated closed cycle powerplants. This firm then lent its experience to American Turbine's staff to develop this MGCR concept. However, listed at the bottom of the back page as licensees to American Turbine are Westinghouse Electric, and Nordberg Manufacturing. This seems to imply that American Turbine had no intent of actually constructing the plant, which also is implied by the final sentence of text which reads "The American Turbine Corporation is available to discuss with you any special problems which you may have in adapting this power plant to your power needs, as well as licensing arrangements."

Finally, a view of one component from a power plant as fully fleshed out as the General Motors plant was. This plant was designed for the MGCR program by General Atomic, a division of General Dynamics Corporation. 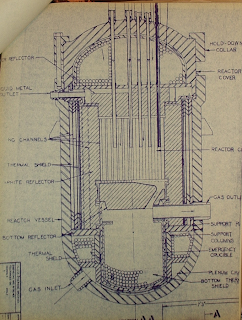 As can be seen, this is the reactor pressure vessel assembly, with internals, for the GA closed cycle gas cooled maritime reactor study. Some of the introductory material for this report helps us further with overall historical focus:

"In response to an invitation from the Maritime Administration for proposals on nuclear propulsion of merchant ships, some preliminary nuclear calculations were carried out by General Atomic early in 1956 on the above reactor concept using zirconium hydride as a solid moderator in a high-temperature gas-cooled system. This concept, with suggested structural details and adaptation to a closed cycle turbine-compressor power plant for a merchant tanker, was disclosed in the resulting proposal of March, 1956 to the Maritime Administration."

The text then goes on to say that the resulting study following was prepared under AEC contract AT(04-3)-118 and was based on the previous proposal. This study then was a direct parallel to the General Motors study described earlier. Like the GM study, this plant had a thermal (reactor) power rating of 55 MW and a sustained shaft horsepower rating of 20000 SHP. Everything else was different, including the use of carbon dioxide as a working fluid.

I hope you've enjoyed this little look into the closed-cycle nuclear plants which ended up going nowhere, but which for a brief time period certainly seemed as if they would. You can expect to see more about these in the future.

APR note: These reports are part of a vast collection of material now in my hands which originated with a former employee of both Westinghouse (Bettis) and Sylvania-Corning Nuclear.