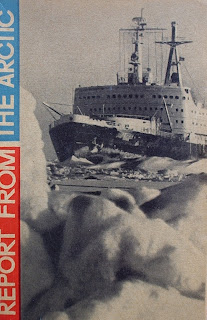 In the previous post I gave the briefest overview of the history of the Russian fleet of nuclear powered icebreakers. In this post I'll go into detail on the powerplant designs used in these ships.

The Lenin was built in 1957-1959 with three pressurized water reactors which were designed by a group known as OKBM which originally was formed as a part of the Gorkiy Artillery Plant. The organization has a complicated history (as do all Soviet design bureaus) but basically was the same group responsible for the design of the first Soviet submarine reactor, prototype for the NATO "November" type, which first achieved criticality in September 1957.

Lenin was originally constructed with three 90 MWt two loop pressurized water reactor plants of type OK-150. Let's take a look at the construction of the powerplant.

First, we see from The Atomic Energy Deskbook a cutaway model illustration originally provided by the Atomic Energy Commission. This blows up very large, so make sure to click on it. 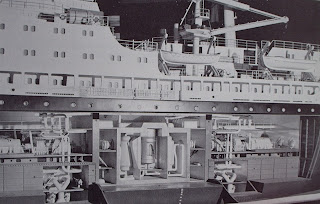 In this view, we can see the heavily shielded reactor compartment in the center. According to the Soviet propaganda booklet "Report From The Arctic," 1964, which includes many press stories about travels on the Lenin, this shielding weighed over 2000 tons and was over 17 inches thick. It included both steel and concrete. Each of the reactor plants had two loops; in each loop was one steam generator and one main coolant pump.

This plant as originally designed had a number of details that can only be described as being very developmental and early, and which were designed out of any later plants. (Some of these kinds of things hold true for early US plants as well.) Let's take a look at a few primary plant components to illustrate the design better. 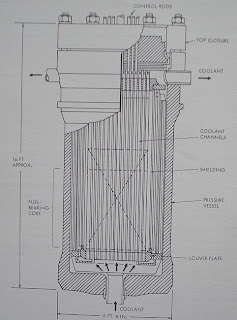 Above is a cross section view of the internals of one of the OK-150 plant's reactor vessels. Notable instantly is the single coolant inlet at the bottom of the vessel; this violates the tenet that no primary coolant system leak should be able to drain the reactor vessel of coolant. This was designed out of later plants. Note also that one inlet is used for both loops; flow is joined from the loops at a "T" junction below. The core used 5% enriched uranium, and was single pass. Reported primary plant characteristics included pressure of 2940 psig, hot leg temperature of 616F, and cold leg temperature of 478F at full power.

The above illustration is from "Nuclear Propulsion for Merchant Ships", A.W. Kramer and published by the AEC. Let's use another illustration from that volume to show the plant layout better. 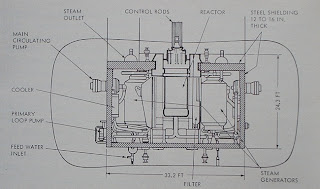 Above, side view of Lenin's original OK-150 reactor plant. Note the main coolant pump motors protruding through the plant shielding, one fore and one aft. There is also a backup coolant circulating pump shown. Note again the "T" junction under the reactor for coolant inlet. The compact nature of the steam generators is also notable.

As in some other early plants elsewhere the space above the reactors was accessible during critical plant operation; this allowed work on the control rod drive mechanisms. Below is a view of this space from "Report From The Arctic" showing all three reactors abreast of each other. 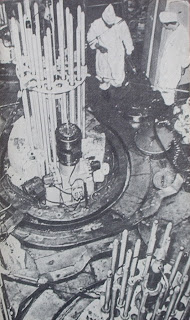 In the model shown earlier it's possible to see two engine rooms, fore and aft of the reactor compartment. These house four steam turbine driven generator sets. Lenin used turbo-electric drive; the screws of the ship were driven by large electric motors. This allowed for rapid changes in propulsion power and rapid reversing, necessary for icebreaking. Each turbine drove two DC generator units through a reduction gear. The DC generator units were not identical, however; one unit had both armatures wired in parallel and powered the center propeller while the other set had two separate armatures, one powering each of the two outer propellers. Thus, the center propeller had twice the power of the outer ones with a total of all three at full power of 44,000 horsepower. In order to accommodate rapid power changes on the propellers without having the reactors load follow immediately (which they could not, due to large thermal inertia due to the relatively low fuel enrichment) the Lenin was provided with steam dumps around the turbines directly to the main condensers.

The Lenin did not require all three reactors to develop full power. The ship normally had only two reactor plants critical at any time; in fact, the original design called for two but it was found that a third could be installed with almost no penalty (only the weight of that plant itself, no increase in shielding, or plant length or width overall) and so three were used in order to provide reserve in terms of operational time between refuelings.

A number of serious difficulties were encountered with the powerplant in the middle 1960's, and the Lenin was out of service for a few years while the orignal OK-150 reactor plants were removed and replaced with two OK-900 plants. One volume in the APR collection indicates that Lenin had its turbines replaced as well, although the photos of the ship as a museum contradict this. Below, from OKBM's site is an illustration of what all of the new generation icebreaker powerplants look like. 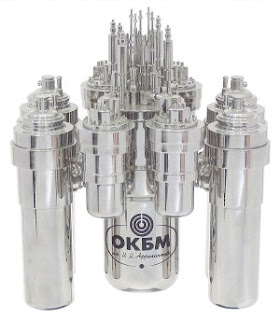 Above is the KLT-40 reactor plant developed from the OK-900 / OK-900A. Note that the plant is very compact; no components penetrate the reactor compartment; no penetrations are below core level on the reactor pressure vessel; four loops, one pump each; vertical steam generators.

Sharp readers with nuclear experience who looked at the photo links on the previous National Nuclear Science Week installment on this site will have noticed the Reactor Plant Control Panel depiction, pictographically, on board the Lenin of a powerplant essentially identical to this one, exactly as one would expect after the rebuilding.

The next two ships after the Lenin were originally built somewhat like the modified Lenin; they incorporated two OK-900A reactor plants. The OK-900 as installed in the Lenin was rated 159 MWt; the OK-900A was rated 171 MWt. All of the large icebreakers up through the 50 Let Pobedy use two OK-900A plants. One volume in the collection here indicates that Arktika and Sibir had much different turbine plants from the Lenin, however. Each ship had two 37000 HP turbines which drove the electric generating equipment instead of four small turbines. That volume does not state whether these are generators or alternators, but alternators are much more likely at this size and power rating. The new icebreakers after the Lenin (of the large type, that is) have a shaft horsepower of 75000.

The two smaller 'shallow draft' icebreakers have KLT-40M reactor plants of similar general design and rated the same (171 MWt) - but only one reactor plant per ship instead of two. The containership "Sevmorput" has one KLT-40 rated slightly lower at 135 MWt. All are turbo-electric drive.

I hope you've enjoyed this brief look at the powerplant designs of the Russian nuclear icebreakers. It's a very narrowly covered topic - and it should not be, because this is one job that is tailor made for nuclear energy.

For more information and details:

Below, from "Report From The Arctic," public space ladder well in LENIN. 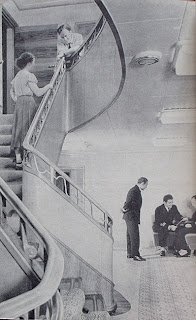