Today is the first day of NNSW, and as we look at the official website for NNSW we find that the topic of the day is "Get to Know Nuclear." Nuclear energy (the primary focus of this blog) has been in the news quite a bit lately - and we have found very clearly as indicated by readers' questions and comments that there is indeed a vast gap in knowledge (at least in the United States) when it comes to things nuclear.

In keeping with today's basic theme, let me just make a few points and state a few facts about nuclear energy and related topics so that they are clear to even the youngest readers we might have.

-Nuclear energy is made possible by the loss of mass that occurs when atoms are split and that mass is converted into energy.

-In nuclear reactors, we use the heat energy produced by fission of atoms to heat water and make steam - steam just like you would use in a coal burning plant.

-Nuclear reactors do not take in any air. They also do not give off any exhaust.

-Nuclear reactors are loaded with enough fuel that they can run at full power for many months or longer. Some kinds of reactors are not refueled for many years.

-Radiation - tiny, invisible particles that are given off by nuclear reactions - can cause damage to your body. But radiation cannot make YOU radioactive; you will not give off radiation if you are exposed to radiation.

-Nuclear reactors can suffer damage just like any other kind of machine man has built, although in terms of the number of hours reactors have run world-wide without damage and injury they are less likely to suffer failure this damage than cars, airplanes, trains, buses or ships. In other words, every kind of machine around you that's larger than a refrigerator is more likely to fail and cause injury than a nuclear reactor is.

-Even in the worst possible situation a nuclear reactor cannot explode in the way that nuclear weapons do. Why not? The uranium or plutonium in a nuclear weapon is extremely pure so that the effect of compressing it will be what we know as a nuclear explosion - a "nuclear yield." A nuclear reactor is composed of thousands of other kinds of parts like fuel matrix material (many tons of it) and fuel tubes and support structures and control rods and guide tubes and support plates to hold all those parts... and much more. In other words, even in the worst situation there's so much other stuff in there that you can't get any kind of pure enough nuclear fuel to allow a nuclear explosion. It just cannot be concentrated enough being so outnumbered by many tons of other materials.

-Nuclear energy is only partially environment-dependent. Unlike solar and wind energy, environmental input has no effect whatsoever on how much power the reactors can develop. With those two, we all know that the sun goes down at night and the wind does not blow all the time! Nuclear energy CAN be affected by environmental conditions on the other end of the process - for example, some nuclear plants cannot generate full power on very hot days because they need lots of cool air or cool water to cool plant systems and condense steam as part of the power cycle.

-Nuclear energy does not produce any greenhouse gases. Or carbon emissions.

These are just some facts about nuclear energy. Some of these may stimulate further discussion among teachers and students.

This week I will be presenting details on a job that nuclear energy has been doing with overall top notch success since the end of the 1950's.. and it's a job most people all over the world don't know about. Perhaps you can guess what it is! 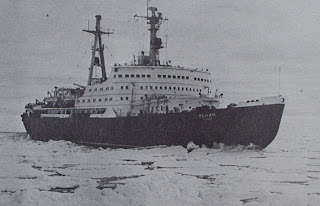