Looking at yesterday's APR update, as well as the APR tweets it's clear that there is a lot going on regarding the nuclear plant situation in Fukushima Prefecture, Japan. It is now possible to make a more thorough update which includes a number of areas of interest.

FUKUSHIMA WILL REFUSE FURTHER NUCLEAR PLANT OPERATION. Various news outlets in Japan, including NHK and Kyodo have now reported that the Fukushima Prefecture Governor, in a meeting with TEPCO officials, has stated that he will not allow further nuclear plant operation in Fukushima. The impact on TEPCO will be considerable. Not only does this mean that TEPCO will be dismantling and scrapping the four damaged plants, it means all of them in the prefecture. This includes two more at the Fukushima Daiichi site and still four others located to the south at the Fukushima Daini site.

A quick and rough figure in terms of cash to perform this job is possible if we take an NRC report from 1979 covering the decommissioning of a standard GE BWR plant and convert the dollars in that report to today's. The report, completed in 1980, gives a figure for one plant at $43.6 million US dollars - that's using 1978 dollar value. Converting this with an online currency converter to 2010 dollars and multiplying to give six reactor plants (all six undamaged ones) gives us a new additive figure imposed on TEPCO by Fukushima's decision of about $864 million dollars US. Some estimates of the total cost make this figure appear smallish; see the following link to Glenn Williams' brief writeup, which starts with text from my post yesterday and gives some added figures:

The above article's total figure is staggering, especially when one realizes that TEPCO cannot derive any electric generating revenue from the six plants it will now be tearing down which are not at the end of their normal economic lives.

It is for the above reasons that many are speculating on the nationalization of TEPCO, and in fact the Japanese Government (through Industry Minister Yukio Edano) has clearly suggested to TEPCO that it consider at least temporary nationalization. This comes in the face of TEPCO making a request to the Japanese Government for further capital to the tune of $88.6 million US (equivalent.)

Fukushima Daiichi No. 1, No. 2, No. 3: All three plants experienced serious reactor accidents and are in a prolonged process of control, mitigation, containment, cooldown, and decommissioning.

Fukushima Daiichi No. 4: This plant was damaged by secondary causes from the other plants and will be decommissioned. Almost no damage occurred to nuclear fuel at this plant, all of which was in the spent fuel pool. See here for details.

Fukushima Daiichi No. 5, No. 6: These two plants received some tsunami damage but no secondary damage from the accidents at the other plants, being sited far enough north to be spared. However, it is a practical certainty these plants would never have restarted and now with the Fukushima Prefecture decision, they will also be decommissioned.

Fukushima Daini No. 1, No. 2, No. 3, No. 4: This separate nuclear generating site is somewhat south of Fukushima Daiichi and did not receive as much quake and tsunami damage. With the new Fukushima Prefecture decision, these four still operable plants will now be decommissioned.

There is now a very seriously thought out body of evidence which TEPCO has presented to the world concerning the actual status of the reactor cores, reactor pressure vessels, primary containments (dry wells) and reactor buildings of the three Fukushima Daiichi plants that have experienced reactor accidents. TEPCO has produced a long and somewhat complicated video describing this work in detail.

The conditions can be summarized briefly, and are helped by the following illustration I have prepared. 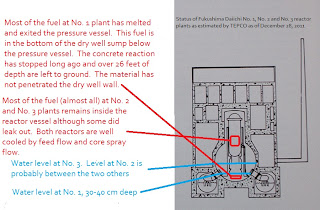 Fukushima Daiichi No. 1 - Most of the fuel has been destroyed by melting. Most of the fuel has exited the reactor pressure vessel and has deposited in the area of the dry well directly below the reactor, inside the reactor support pedestal area and in the drain sumps. This fuel did cause a corium-concrete reaction whose effects in terms of gases given off were only all too obvious during the accident. This fuel has not reached the dry well wall; the reaction is stopped; the mass of fuel is properly cooled. Around 25 feet of depth consisting of reinforced concrete remains underneath the dry well and some further depth of concrete inside the dry well under the melted fuel mass. About one foot of water covers the melted fuel mass in the dry well.

Fukushima Daiichi No. 2 - Most of the fuel is still inside the reactor pressure vessel with a majority of it melted and relocated. Some melted fuel has exited. Water level inside the reactor vessel is not detectable due to proximity of water legs to heat. Water level in the dry well is not known but is estimated to be deeper than that at No. 1 and less than at No. 3. The core is suitably cooled by feed flow and core spray flow.

Fukushima Daiichi No. 3 - Most of the fuel is still inside the reactor pressure vessel with a majority of it melted and relocated. Some melted fuel has exited. Water level inside the reactor vessel is not detectable due to high radiation preventing work. Water level in the dry well is perhaps almost half way up the large spherical dry well chamber.

TEPCO TO SCOPE NO. 2 PLANT: There are reports on NHK that beginning soon, TEPCO will prepare to insert a television camera using a device like an endoscope which is only 8mm wide into the No. 2 plant dry well to attempt to view the conditions inside. This will be the first actual visual assessment of the interior portion of any of the three damaged reactor plants.

This about covers the present situation. I highly recommend viewing the TEPCO video linked above if you have nuclear experience; persons without will still find it of interest but perhaps a bit dry.

Finally, there is a further "tour video" of the Fukushima Daiichi site now uploaded at the APR YouTube Channel. There is no description, and captions are in Japanese, but the site views are worth seeing... I've provided some description in the caption below the video to detail what's being shown.

UPDATE: I've been informed by a friend of mine in a position to know that the estimates I've given above, and also probably some others floating around, for the decommissioning cost of the Fukushima plants are probably quite low in point of fact. He gives the example that Connecticut Yankee, a single reactor (Westinghouse two loop PWR) cost over $800 million to decommission. See here for information on the decommissioning process of Connecticut Yankee.
Posted by Will Davis at 8:39 AM