There has been a lot of bad press about the announcement by the Japanese Government that the reactors at Fukushima Daiichi have achieved a state of cold shutdown. I have tried to clear this up in a previous post, but since there does appear to be continued confusion in some media, I will make a couple of additional points.

It was stated (and continues to be, in places) that the owner-operator of the Fukushima Daiichi site (TEPCO) and that the Japanese government have been less than forthcoming with information, and that operations on the site and effects off site have been covered up. This could not be further from the truth; simply look at all the posts on this site and all the videos on the APR YouTube Channel for this proof. To this end (that is, for the sake of transparency) a very detailed recovery timeline was developed and published widely by all concerned parties and continues to be used to this day.

The achievement of 'cold shutdown' is one of the steps on this timeline, and as such when it's reached, it's announced. This is simple enough for anyone to understand. But who made this determination? Let's look at a quote from NISA's site (Nuclear and Industrial Safety Agency) to get the facts:

December 19, 2011... NISA website. "The Nuclear Emergency Response Headquarters evaluated that the reactors at Fukushima Daiichi NPS, TEPCO, were brought to a condition equivalent to "cold shutdown" and, even if an unforeseeable event occurs, the exposure dose at the site boundaries can be kept at a sufficiently low level as a result of the evaluation of the securing of safety at nuclear reactor facility of Fukushima Daiichi NPS, TEPCO, at the completion phase of Step 2, stating that a safe condition has been achieved and the accident at the NPS itself has come to be settled."

So, the Nuclear Emergency Response Headquarters (this is a special construct of the Japanese Government) decided that the condition had been achieved, and it seems obvious to me that NISA and TEPCO would be included in this decision making simply by virtue of the complicated manner in which the Japanese nuclear industry operates. Thus, this is neither a unilateral nor simply a political announcement - it's technical. And it's mapped out on the timeline as a required step.

What does this mean? Well, "cold shutdown" is a term normally used for intact reactors in normal conditions; the term is adapted here to indicate (as I've posted before) that the reactors are cooled down sufficiently and that release of radionuclides to the atmosphere is minimal or zero. Here are some further specific facts:

In the final analysis, this announcement is kind of like saying "I think I have caught a cold." You already had the cold before you knew it; the symptoms accumulated until as a group you put them all together to determine you were sick. This announcement is very similar; each of the contributory factors was reached independently of the others in ways, but tied together in ways so that the actual state of "cold shutdown" has existed for weeks. Only now did the nuclear response headquarters unit, NISA and TEPCO collaboratively decide that it was time to announce without doubt that this status had been achieved. What this means is detailed above; it could not be more clear what this means and does not mean. It also could not be more clear that there is no political advantage in making this announcement for anyone - it's a matter of plant status, and that's all.

Here are some links that readers might find to be of interest.

NRC Chairman Jaczko's comments after a visit to Fukushima Daiichi, on the cold shutdown announcement and plant conditions 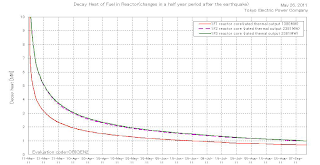