Yesterday and today mark an important event in nuclear energy history; these two days are the span during which the EBR-1 reactor plant, which was located at the National Reactor Testing Station, Arco, Idaho, generated useful electricity for the first time. The plant was slowly brought up to full power over a two day span; there was a famous moment the first day (December 20, 1951) on which the plant's turbine generator powered four light bulbs, while on the second day the turbine generator supplied all the plant power needs.

Dan Yurman, who worked at the NRTS (later, INEEL) for many years has an excellent posting on Idaho Samizdat which includes two videos. Click here to see his post; I highly recommend it.

Now, to be clear, in those years there were a number of "firsts" and a number of claimed firsts. The event we're talking about at EBR-I was the first generation of useful power to do work by a nuclear reactor plant. This was, of course, in the form of electricity. Let's take a quick look at a "firsts" timeline to get a better perspective overall; this is a generalized timeline I constructed myself a long while back for general reference.

That's a pretty solid, if brief, early timeline. At some point I'll publish the entire timeline, but these are the highlights. Now, let's get back to the anniversary at hand with just a quick technical look at the EBR-I plant.

EBR-I was a liquid metal and air cooled experimental fast breeder reactor. It was designed by Argonne National Laboratory, which at that time was the principal design bureau for the AEC. The Austin Company acted as architect-engineer, with Bechtel Corporation building the plant. The purposes of this plant were quite simple; it was supposed to test various breeding core designs (breeding means that you get as much or more fissionable material from core operation as you burn from the initial fissionable material loading) as well as work out various problems that were anticipated with metal cooled fast breeders. For those uninitiated, "fast breeder" means that the reactor is designed to sustain its chain reaction on fast fission - that is, the neutrons are not slowed down or 'thermalized' as they are in water cooled reactors.

Below, we see some illustrations from a TID-4562, Experimental Power and Test Reactors, November 1956 which was published by the Technical Information Service of the Atomic Energy Commission. First, the entire plant in cutaway, with the external building omitted. Click to enlarge. 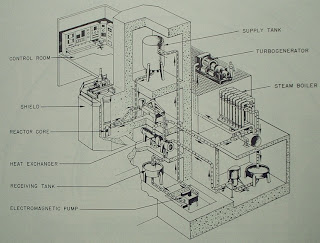 Caption from TID-4562: "The primary liquid metal coolant flows by gravity from the supply tank (top center) through the reactor core, from which it absorbs heat, and then to the heat exchanger, where it gives up this heat to the secondary coolant, also liquid metal. The primary coolant is returned to the supply tank by an electromagnetic pump (bottom.) The secondary coolant is pumped to the boiler, where it gives up its heat to water, thus generating steam. The steam then passes to the turbine, is condensed, and returned to the boiler by a feed water pump.

This plant used NaK (sodium-potassium) for both the primary and secondary (intermediate) coolants; in the initial core installation, the primary coolant entered the core at 442F and exited at 600F with a pressure maintained at about 100 psig. The NaK flow rate through the core was 292 gallons per minute. The outer blanket was cooled by air, with a total airflow of 5800 cfm. Data indicate that if the inlet temperature to the blanket was 37F the outlet temperature was 196F. 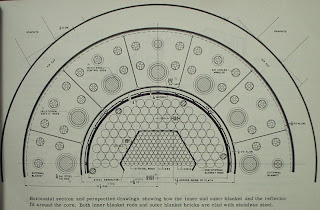 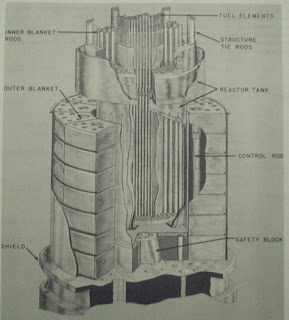 The outer blanket of this core was movable on an elevator, and could be lowered to act as a control element. The core also had four regulating rods and eight safety rods.

The primary NaK coolant in this core flowed down between the inner blanket rods, and then up through the comparatively tiny central reactor core. As mentioned, there was a double heat transfer circuit also using NaK as the intermediate coolant, and then water as the final coolant. This steam generator produced steam at 400 psig and 3630 lbs/hr flow rate to drive the turbine generator which was rated 200 KWe. The total power of the reactor was divided; 72% of the total power was developed in the core, 14% in the inner blanket and 14% in the outer blanket. The total power rating of this core was 1400 KW.

Finally we have a view of the reactor installation from inside the reactor building. Eight to nine feet of concrete shielding surround the reactor tank; the stairs at the left lead up to the control room for the plant. 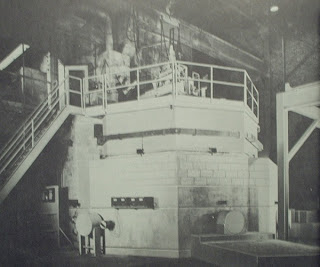 I hope you've enjoyed this commemoration, and a brief historical perspective.