All of us with any interest in nuclear energy have spent the better part of this year locked in a struggle with the realities of the Fukushima Daiichi nuclear accident. While many of us had known about the (remote) chances of such an occurrence prior to the March, 2011 earthquake and resulting tsunami that triggered the accident, it's likely that few placed a high enough chance of actual occurrence on such an event to cause worry. What is most unfortunate is that now, having had to watch, analyze, write about and sometimes defend actions by TEPCO, NISA and the Japanese government on and off site, the chances of any other such event are still as low as they were before the event .. and that no one will realize this fact. We might actually blame the US Government for this, in reality.

This line of thought was recently brought up in this writer's mind when the NRC published a brief historical perspective of the PRA or Probabilistic Risk Analysis technique that was used in WASH-1400, known as "The Reactor Safety Study." You can see this piece at the NRC blog by clicking here. It has long been my concern that such a document pushes away the general public because of its complexity. For background and support, I'll give a brief additional history to that found in the NRC piece.

Even in the earliest days of nuclear energy in this country (both military and commercial) it was recognized that any accident that caused harm to the general public or damage to citizens' property must be avoided at all cost and plants were designed with so much conservatism overall at the beginning that today we might be surprised. As the best example, the first commercial nuclear power plant, the Shippingport Atomic Power Station, was constructed with all of its primary components below grade in massive reinforced cylindrical or spherical (for the reactor) vessels.

I could go on for days about early plant design, but that isn't the focus. What's important is that even with the conservative designs, many still wanted some sort of study performed that could augur the real risks to the public from nuclear power plants were there to be an accident. This desire resulted in the first watershed safety study to be performed; this was an Atomic Energy Commission study titled "Theoretical Possibilities and Consequences of Major Accidents in Large Nuclear Power Plants." This study was completed in March, 1957 and received the AEC publication number WASH-740. This study has often been named as the first such of its kind, and often been cited as having been far too unrealistic in its assumption of what would actually occur if an accident took place. For example, WASH-740 indicated that if a 500 MWt reactor plant were to melt down and the containment were to fail, this might result in 3400 dead and 43000 injured. We can see clearly from the multiple reactor accident in Japan recently, the Chernobyl accident in Russia and can surmise from other accidents (this many years later, I must note) that this study was way over the top in its estimations.

Because of the increase in plant size over the years, there was pressure to re-perform the analysis taking into account the larger source terms that more powerful reactors would generate and, as a result, the study was revised in 1967.

This analysis did not appear in public, and was kept within the AEC. However, there was a clear need for a document for the public which would be more readable, more reassuring, more descriptive and more thorough than WASH-740 and another effort was begun. This effort resulted in a document frequently quoted ONLY on Atomic Power Review and little remembered today for it was never widely published and only appeared in draft forms. This document is something that I consider to be vastly superior in content to either WASH-740 or the later and more famous WASH-1400 made to stand on WASH-740's shoulders because it's written for the general person and contains a great deal of basic information about nuclear energy in general. This document was titled "The Safety of Nuclear Power Reactors (Light Water-Cooled) and Related Facilities." The publication number was WASH-1250, and I have one of few copies here. 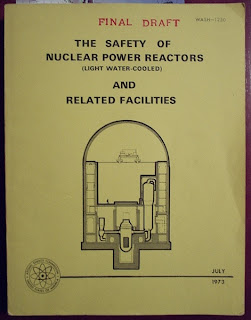 There has been but little information made available concerning the fate of this document. However, the transcript of a speech given by Joseph M. Hendrie in 1986 (see DOE database, document BNL-36253) and which was titled "A Probabilistic Commentary: The Rise, Fall, and Rise Again, of Risk Assessment" and in part on which the recent NRC blog post may be based does mention this obscure WASH-1250 document. Unfortunately (according to Hendrie's speech) Senator Pastore, a ranking member of the JCAE did not feel that WASH-1250 was what was needed to get at actual risk to the public. Although 1250 was ready in preliminary draft form in 1972 the JCAE commissioned essentially a full revision of the WASH-740 study with new PRA techniques using fault tree analysis, as a totally separate effort, and the final draft (shown above) of WASH-1250 which was prepared in July 1973 never really saw the light of day.

This is where the problem with public assessment of nuclear power risk and benefit begins. The decision to make the sole effort essentially a "new math" exercise made almost sure that the information would be daunting to the average man on the street. In point of fact, the formal debut of WASH-1400 in 1975 was accompanied by the launch of a training course for NRC personnel titled "System Safety and Reliability Analysis" to help with understanding the analytical method; this ripened into the development and publication of NUREG-0492, the "Fault Tree Handbook," to make a text for such a course generally available.

Joe Average doesn't want to have to take an advanced math course to be able to understand what his relative risk from nuclear power is. Even then, he won't want to take the time to find out why this or that fault tree branches off at "relief valve fails to reseat / no operator action" and then assess a percentage risk in terms of reactor-years for core melt.

WASH-1250 was in my opinion the right way to go for persons outside the industry, while WASH-1400 was the right way to go for persons inside of it. I am left to wonder whether the voluminously informative 1250 was lost in the dust of the splitting up of the AEC; surely, the new, almost anti-nuclear NRC would not attempt to publish a document like 1250 because of its almost clear but always implied support for the capability of the industry, the owner-operators, the regulator and anyone else involved. WASH-1250 in fact admits a slight pro-nuclear bias, right on page ii of the prologue... "By and large, however, it is a summary and discussion of a large body of published information pertinent to nuclear safety, as interpreted by AEC staff. The reader will, therefore, understand that a certain degree of pro-nuclear power bias is probably inherent in the discussion, although staff has tried to make the presentation as simple, factual, and objective as possible."

The simple fact is that after the publication of the final draft of WASH-1250 there has been exactly one nuclear accident at any US commercial plant (which is only what this volume is intended to discuss -- nuclear plants built to US practice, inside the United States) at which no one was killed or even injured. Thus, at least in terms of integrity of this report, there is no damage in so far as no major accident has occurred at any US plant to contradict it. While the previous may seem defensive to those either undecided or anti-nuclear, it is simply meant to indicate that such a report -- which does not augur disasters and then calculate their average chance of occurrence and resulting damage, but rather which attempts to clearly explain safety in design, construction and operation -- is not inherently pro-nuclear but actually inherently, simply explanatory.

The authors of WASH-1250 clearly knew that their approach was under fire. One wonders if the quoted statement in the preface was original to the first draft; one also wonders if the following description, found on page 6-40 of WASH-1250, was included in the first version either. This section follows some discussion about risk probability which had not used any sort of fault tree analysis:

"... It is a fair presumption that knowledge and techniques will be improved in proportion to the future effort devoted to such studies. In this connection, the AEC has recently undertaken a quantitative, probabilistic study to try to reach some meaningful conclusions about the risks of accidents from nuclear power plants currently in service."

The above refers of course to the launch in 1972 of what became WASH-1400 which apparently, we now realize, suppressed WASH-1250. I must add that, at the end of this section of WASH-1250 the last sentence is as follows:

"It is possible to conclude from the order of ranking currently perceived that nuclear power presents one of the smallest man-made risks (mortality) to which mankind is exposed."

One could get that assumption from any number of places, but when one reads only PRA for nuclear accidents, one gets locked into the thinking that surely one of these or another, or something not exactly predicted but nevertheless dangerous (as TMI was, exactly) is bound to happen. It might, but the death toll from nuclear accidents since WASH-1250 in the United States is still zero, so that even if something predicted by PRA does happen, or something almost predicted does happen, the risk is still incredibly small to plant operators or the public when compared with almost any other risk.

What I am really talking about here, of course, is slant. Publication of loads of PRA work to indicate risk of every conceivable failure and operator fault is actually necessary but indicative only of the negative side of things, as it were, to the average man. Such a volume as WASH-1250 was, which includes a vast amount of detail on plant construction, fuel processing, spent fuel handling, dose rates and effects, regulatory responsibility (and also many complete federal codes) might seem overly on the positive side in terms of simply stating what the industry and AEC were doing to ensure safety, should be considered necessary too since nuclear energy is a major portion of our energy generating capacity in this country. I again wonder if this report were just a bit too pro-nuclear for the new anti-nuclear NRC to allow, and regret that fact if it is true.