A number of updates from Fukushima Daiichi...

-TEPCO has announced that as of today, the final additions to the enclosure structure at No. 1 reactor building have been made (air circulation and filtration equipment) and that the inspection of the structure and systems by NISA is completed satisfactorily. The structure itself has been completed for a while, but this might be considered as the official commissioning of the entire structure and ventilation system.

-TEPCO has also announced that it will drastically increase the amount of water being injected to No. 1 reactor in order to cut down on evaporation inside the structure. It appears that the high humidity environment is hampering the ability to work inside, so TEPCO will increase the feed rate through the feed line (normal feedwater injection line) upward from 4 cubic meters per hour to 7.5 cubic meters per hour over four days. When the conditions of the plant are ascertained at that point TEPCO will further increase water flow. This will also reduce drastically any gaseous emissions to the enclosure from the damaged reactor.

-TEPCO has discovered a nearly or else completely sheared axle shaft casing on the overhead crane at the common spent fuel building at Fukushima Daiichi. The cause is yet unknown, and no hazard is posed at this time.

-TEPCO is almost ready to place the gas handling system (improvised arrangement) at No. 2 reactor plant (to handle gases in the primary containment) into operation. This system will filter out radioactive airborne contaminants. Similar systems will be employed eventually at all three reactors.

-Finally, airborne releases from Fukushima Daiichi continue to decline .. contrary to many reports on anti-nuclear sites .. as shown by these two panels from a report issued by the Japanese Prime Minister's office. 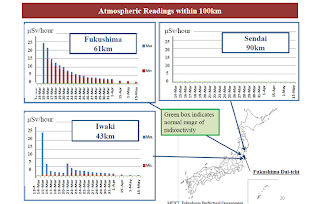 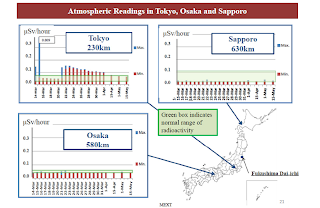