APR is proud to host, for the third time, the rotating Carnival of Nuclear Bloggers. This carnival is aptly named, travelling as it does from place to place and featuring the best that the pro-nuclear blog world has to offer. APR's regular readers have now become accustomed to the appearance of this feature from time to time and have, according to best reports, enjoyed it.

Twice before when hosting the Carnival, APR has included a feature entitled "What is this?" This third installment of the Carnival at APR is no different. Below, a photograph of something - this "something" is pictured sitting on a brochure whose cover is merely attractive and has nothing directly to do with the item pictured. Certainly many will recognize this item right off, but the real question in this case might be better put as "What is this, really?" 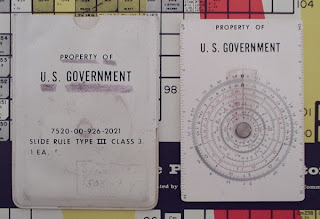 The answer to this question will appear after the Carnival entries and links for this week; APR declares, officially, "no fair" in scrolling to the bottom of this entry to discover the answer before fully reviewing the featured blog postings, thus rendering the Carnival when held at APR a cheap thrill ride.

With that, the 69th Carnival.

The Institute of Energy Economic of Japan (IEEJ) says that for the past five years the cost of nuclear generation remained stable at around ¥7.00 ($0.09) per kilowatt-hour (kWh). However, even if compensation of up to ¥10 trillion ($130 billion) for loss or damage from a nuclear accident is taken into account, the cost of electricity generation with nuclear reactors increases to some ¥8.50 ($0.11) per kWh.

Link: Wind & solar are not "intermittent"; they are unreliable, unpredictable, uncontrollable and worthless

Americans most likely associate the word “intermittent” with their easily controlled windshield wipers that can be adjusted to match the demand of clearing their windshield through a variety of conditions. However, people also describe wind and solar power as "intermittent" energy sources.

We have been using the wrong word and conveying the wrong meaning. Unlike our intermittent windshield wiper systems, with their responsive control systems that allow drivers to pick exactly the right speed to respond to changing demands, the desired output of wind and solar power systems are completely dependent upon the input weather conditions. No human can control the weather or make systems dependent on the weather produce the right amount of power at the right time.

We want our power to smooth, reliable, and utterly under control. Wind and solar do nothing to assist grid operators deliver a product meeting those requirements.

China restarts progress on its nuclear energy program. Post-Fukushima safety checks are done, but the size of the new build will be smaller. This blog predicted last December that the size of the new build in the next ten years would not be 80 GW, but something closer to 25 GW. According to the latest statements in China’s state-owned media, the amount of construction by 2020 will be 30 GW with another 28 GW built between 2020 and 2030.

Also, China has hooked up a fast reactor to the grid supplying electricity from one for commercial use for the first time in that country. The China National Nuclear Corporation plant is generating 20 MW and has a capacity of 65 MW. It was built with help from a consortium of Russian state-owned companies.

Link: Uranium - Not Just For Reactors

Gail Marcus takes a break from writing about Fukushima and, triggered by a new stamp from the US Postal Service, makes note of how uranium was used in days before the first the reactor ever split an atom.

APR note: Folks, this is really a fun post.

Margaret is continuing her evaluation of the nuclear industry by looking at social factors affecting the industry. This week she examines the industry demographics of age and education.

Link: Darlington nuclear as an election issue: to support, or not support, thousands of real clean energy jobs

Rod Adams reports from the ribbon cutting ceremony of the Center for Advanced Engineering Research in Bedford County, Va. near Lynchburg -- a state-of-the-art, flexible high-tech research center that will advance the development of new nuclear energy projects in the United States

APR Note: Rod Adams actually appears twice in this Carnival go-around; once at his own blog and once on the ANS Nuclear Cafe blog as listed here.

In this post, Meredith Angwin describes the consequences Hurricane Irene. Her town won't refurbish the town hall or hold a railroad festival because they must clean and repair roads after the hurricane. She compares road damage to early decommissioning of nuclear plants, which also destroys a working asset.

ATOMIC POWER REVIEW has its own Carnival entry as well:

APR begins a new recurring feature, the APR Atomic Journal, which will include technical and historical pieces. This first installment is part 1 of the story of the Elk River Power Reactor. It includes much material never widely seen or distributed.

And that's it for the 69th Carnival of Nuclear Bloggers, which APR is proud to be hosting this week. I encourage all of my regular readers to follow the Carnival as it moves around, as linked from APR from now on and also by the auto-update blog roll on the right panel of this blog.

Now to answer the question: "What is this?"

Many of you will have recognized this item as being a circular slide rule. For those of the calculator-only era, this is a device for performing mathematical computations.

According to my brother, David A. Davis, who is a long-time slide rule collector, this exact variant with this labeling is very rarely seen.. and in fact had I not purchased this item from its original owner I might not have had any clue exactly what its origin was. 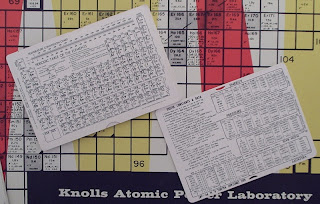 Above, we see the back of the slide rule on the left. On the right is one side of the thin insert which can be removed from inside the slide rule back itself.

So far as is known to the slide rule collectors' universe this is the only slide rule (model, that is) that can be directly attributed to having been issued at any NNPS. It might have remained a mystery had the seller not indicated its origin.

Now the second part of "What is this?" ... This slide rule is NOT totally specially made for the US Navy. It is a commercially made piece, whose inserts, in commercial production, can vary. When sold in normal markets outside the military this particular slide rule was known as the CONCISE 600. Below we see a very late production special edition of the Concise 600 marked and specially imported for the International Slide Rule Group as a commemorative model for the late Michael O'Leary, in comparison again with the USN NNPS version. 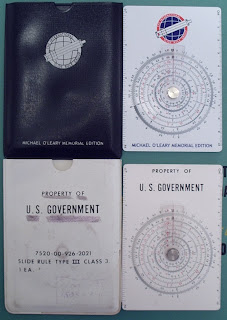 We'd welcome any of our friends out there to provide comments on this NNPS issued slide rule or others. Special thanks to David A. Davis for lending me his O'Leary / Concise 600 and for information. See his slide rule blog HERE.