-No. 4 spent fuel pool temperature cut in half by system operation

Not too surprisingly, the continued investigations on site .. and surveys .. are finding some very high radiation levels. We say "not too surprisingly" because, for example, during the Three Mile Island accident a level as high as 800 R/hr was detected at the containment building. Much higher has been seen in other, much more severe accidents. It is for this reason that the discovery of radiation levels such as we're about to detail is perhaps disconcerting but NOT particularly surprising given the damage to three installed reactor cores.

Here are the known facts. First, a level of about 1000 R/hr has been found coming from one or two areas in the common exhaust stack connecting piping that serves No. 1 and No. 2 reactor buildings. Second, various areas outside the plants have been found to have scattered, focused high radiation readings from debris (which is actually nothing new.) Third, a radiation level has been detected on the second floor of the No. 1 reactor building that is about 500 R/hr.

Both of these very high readings just quoted are concerned with vent piping. The material in the vent piping could have accumulated there at any point, perhaps at the time of the explosion although this is by no means certain. TEPCO has provided a couple of photos.

First, a shot of a man using a radiac at the general location of the vent piping high rad readings. 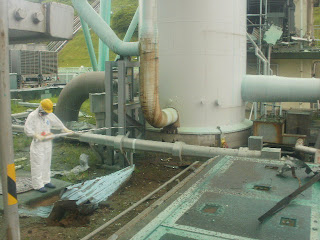 Next a shot with one of TEPCO's Gamma Cameras. The location of the hot spots is clearly visible. (This camera indicates γ-ray intensity. TEPCO appears to not only have these on robots but hand-held units as well.) Photo taken 4 PM July 31, 2011. 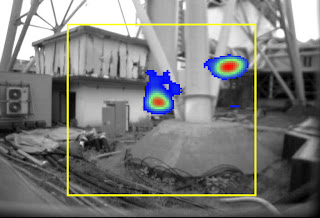 TEPCO has indicated that this area is now off limits. It will perform additional surveys and is considering the application of shielding. No specific data about the high rad point inside No. 1 building has yet been given, in terms of response.

TEPCO's full operation of the cooling system at No. 4 plant has cut the spent fuel pool temperature reading down to half of what it has been for weeks. The latest official data shows a reading of 44C. This is only about ten degrees above the fuel pools at No. 2 and No. 3 plants. 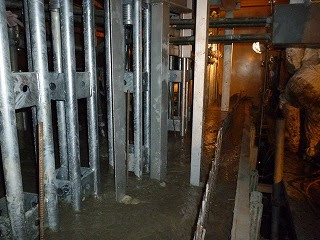 Above, the steel girder structure under the spent fuel pool before any concrete was poured into the space. Below, the form wall is in place and concrete is being pumped in. 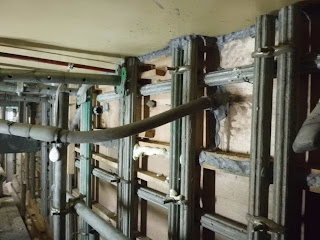 Below we see the completed support structure as it appears now. 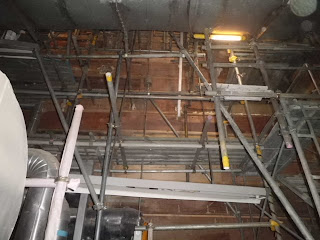 Below we see a TEPCO illustration showing the operations we've seen above in cutaway view, for clearer understanding. 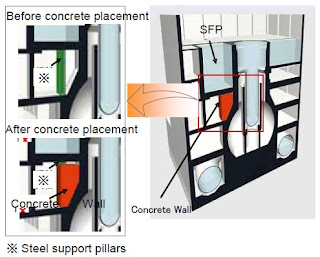 TEPCO has shipped in and installed new water handling equipment from Toshiba and Areva. These new pieces of equipment are at the end of the water treatment chain and assist in desalination. Two pictures; first the Toshiba equipment, and then below that the Areva equipment. 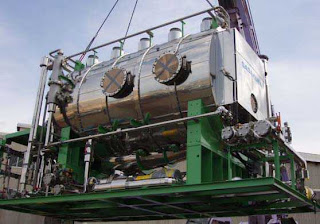 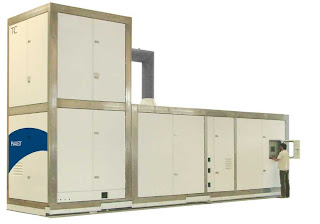 TEPCO is going to construct a further barrier outside the circulating system water inlets at the area of No. 1 through No. 4 plants at Fukushima Daiichi. This will be outside the present silt fences and barriers, but inside the harbor/breakwall area. This fence, to be driven much deeper, will prevent seepage of contaminated ground water into the harbor area and thus to sea. Construction of this wall is planned for the next or "second" period of the timeline - we would have to guess this would be given a moderately high priority given that the tendency at the site still is for the contaminated water volume to still be slightly on the rise. Below, an illustration from TEPCO showing the basic details. Note also the blue line showing the barrier to be constructed around the plant on the land side as well, also down to the impermeable layer. 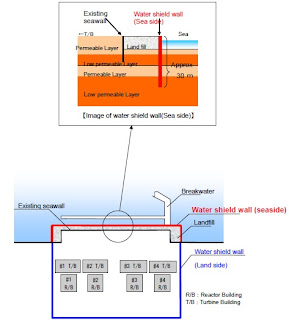 ---NUCLEAR ENERGY IN JAPAN: OTHER NEWS---

A new case of possible interference with the operation of a public forum by both an electric power company and NISA has surfaced. This symposium, over five years ago, was concerning MOX fuel usage by Shikoku Electric Power. The story is the same as we've been seeing- an official from NISA now admits to having requested Shikoku to ensure proper questions were asked and opinions expressed at the government symposium. The official simply says however that the intent was not to make it appear as if public opinion were different than it really was, but rather to prevent a duplication of an earlier event in which no real pro-nuclear opinions could be expressed due to control by anti-nuclear representatives. This attempt to level the playing field was the result.

In general the stories about the truth of these interferences are beginning to sound less like a sort of illegal activity than they first did. The problem is that the incidents are starting to pile up, and they don't just affect one power company or one prefecture. While a PR campaign is not a problem, staffing up public symposiums without telling everyone you are is a problem because it smacks of dishonesty at the very least. But I've said that before. One thing seems clear - now, probably any and every such event remotely like this will come out and all of these kinds of operations will be laid bare.

Update 12:10 PM Tuesday August 2, 2011:
Kyodo news is now reporting that the rad level discovered inside No. 1 reactor building may exceed 500R/hr because the detector in use at the moment has this reading as its maximum; as such, this reading was reported by TEPCO but the actual reading is probably higher.
Posted by Will Davis at 9:35 AM