-The Japanese government and TEPCO have modified their overall timeline for recovery from the Fukushima Daiichi accident. The overall dates have NOT been pushed back, but a number of goals have been redefined, some goals added, and some deleted.

Relevant to our normal discussion on this blog centering on nuclear safety are the following changes: First, the requirement for filtered continuous dry well venting has been deleted. Second, the plan to flood the dry wells has been cancelled. Third, plans to continue to seal leaks in the suppression chambers are marked as cancelled - even though the most recent (July 19, or today) TEPCO press release indicates that "grouting" or concrete filling of the area around the suppression pool at No. 2 plant continues. We will look for further information on this matter. Fourth, the plan to install temporary heat exchangers in the reactor buildings for cooling the reactor cores has been abandoned since the present operation consists of both remotely filtering and remotely cooling the injected water at other buildings on site.

The Japanese Government and TEPCO officially have now declared the first stage of the recovery completed (as predicted here some time back, and then reported here again) in terms of the reactor core and spent fuel pool condition. Also declared completed is the goal to reduce radiation and radioactive release to the environment. In light of this declaration, and all the work accomplished to this point, the changes in the road map planning for the recovery .. some of which were detailed above .. are not at all surprising. In fact, this writer was wondering at what point the official plan would be altered to reflect the improvisations and alterations made necessary by complications; now they have been, for the most part.

One of the more interesting provisions for future work (this is, in particular, contained under the "mid term" or roughly three year time span) is the control of stress corrosion cracking to structural materials in the reactor plants. TEPCO labels this as partially ahead of schedule. The effect on plant components from the injection of salt water during the early accident phases is not yet known; it seems that this road map requirement is in response to such a consideration.

The next step, scheduled for January of 2012, involves primarily the declaration of total cold shutdown of the reactor plants. Those with any experience in this field realize the extrapolations necessary to apply this term used in normal operations of reactor plants to the seriously damaged cores and plants at Fukushima, but in terms of temperature at least it may be applicable or at least understandable.

-Meanwhile, TEPCO has installed a temporary covering over holes in the roof at No. 3 plant's turbine building to prevent rain water from tropical storm Ma-On from adding to the contaminated water. Two TEPCO press photos show the roof structure on the ground by No. 3 turbine building, and then being hoisted into position. 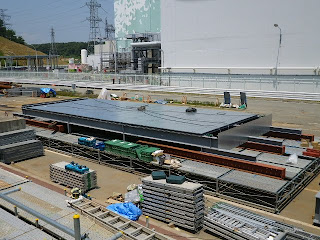 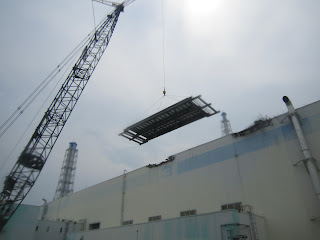 The latest track from the Joint Typhoon Warning Center shows the center of Ma-On heading back out to sea, sparing Fukushima Prefecture a direct hit: 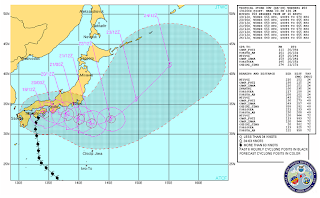 -TEPCO has begun to have some problems with the feed rates lowering to the reactor plants; in particular this has happened more than once at No. 1 plant. TEPCO has discovered several areas in system piping subject to air binding (high points, and check valves), has identified and replaced several piping/hose runs with high head loss, and has identified (and removed) an electrode (actually a sacrificial anode) in a system pipe which restricted flow. It has also changed injection pumps for No. 1 and No. 2 plants. The flow rates continue to be adjusted incrementally but generally are remaining between 3.8 and 4 m³ for No. 1 and No. 2 plants, and 9 m³ for No. 3 plant. Temperatures on No. 1 and No. 2 plants have moved up and down a bit as expected in response to the fluctuations in flow, but nothing of any alarming trend has developed.

Considering that the first recovery step is now labeled as complete, we can begin to surmise some of the operations that will be needed in the future to get the damaged cores out of the plants; we will construct and post a video showing some of the considerations required in this process on the APR YouTube channel in the very near future.

OTHER NUCLEAR ENERGY NEWS FROM JAPAN

Kyodo is carrying very recent news that the president of Kyushu Electric, recently of the e-mail scandal reported here and elsewhere, will resign his position on July 27th.

On Sunday, Goshi Hosono, minister in charge of the nuclear accident crisis, stated on TV that he will approve restart of all safety checked reactors in Japan. He stated that the quality of life in Japan depends upon this move (to say nothing of the impact on industrial manufacturing.) He also is backing a plan to alter the regulatory bodies covering nuclear energy in Japan; this has been in the news for months now after some concern was publicly expressed about having the main nuclear regulatory body as a part of the trade ministry. In the new plan, NISA would be removed from the trade ministry and merged with the NSC (Nuclear Safety Council) as a stand-alone agency quite similar to the NRC here. The final plan, though, has yet to emerge even though Hosono would like to see this by Spring of next year.