There are two situations to discuss at the site as of now, in addition to the post made yesterday about conditions at Fukushima Daiichi.

First, some press has been given to a very brief loss of cooling at No. 5 plant at Fukushima Daiichi. No. 5 and No. 6 plants have been almost completely unaffected, but there have been some minor problems from time to time.

The loss of the Residual Heat Removal System was due to the discovery of a leak in one of the temporary seawater pipes that has been set up to replace the installed but down systems. When we say "leak," it was not as if this leak was difficult to notice. See the TEPCO press photo below. 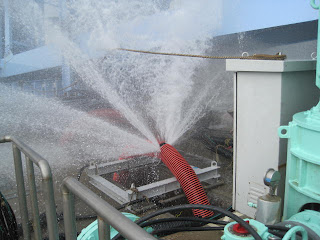 The photo above was made at roughly 3:30 PM on June 3. The system was shut down, and the hose replaced. For those wondering just what this system looks like schematically, and where this leak was, it is instructive to examine two illustrations from a release by TEPCO showing the temporary setup.

Above, in a view from the side we see the two temporary RHRS seawater pumps taking suction on the seawater, and discharging through hoses to two check valves and then several flanged sections of pipe and hose. The leak location and magnitude are clearly shown. Below, an overhead view. 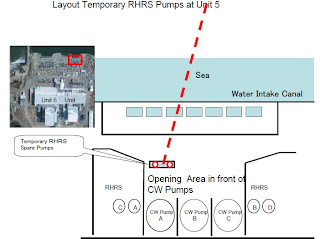 In the view above, we can see the normal circ water and RHRS pumps, and the temporarily installed pumps. The cooling for No. 5 plant was down about two hours and sixteen minutes if the latest TEPCO account is correct; no further problems were noted. TEPCO had stated just before the operation that fuel temperature would rise no more than about 2.5C per hour for the time RHRS was down.

Now, the other situation; TEPCO is intending, according to NHK reports, to make its July 17 date for nitrogen injection into all three reactors a reality even if serious measures are called for. Not only did TEPCO use a robot to clean out some of the access area needed for this operation in No. 3 plant, it is now laying down steel plating to attenuate radiation in the work area. The highest reported exposure levels in the area needed for access are about 186 mSv/hr, or 18.6 R/hr. There will be video of the robot performing its vacuuming job on the APR YouTube Channel shortly. As of this moment, nitrogen injection into No. 2 plant continues smoothly with dry well pressure rising as expected.

All other reactor plant parameters on site are essentially unchanged since the last report.

UPDATE Video now up at APR YouTube Channel.
Posted by Will Davis at 12:15 PM