A number of developments have occurred since our last report.

Further indication of the serious damage at No. 1 plant is the fact that TEPCO's new, temporarily installed pressure gauge at No. 1 plant is reading essentially atmospheric pressure or slightly above. This means that -- IF the gauge is correct -- the reactor vessel is in much better communication with the outside environment than might previously have been assumed.

As continuously noted, TEPCO continues to struggle with the water exiting the reactor cores and at last total had what it felt was over 105,000 tons of contaminated water on site (contaminated to various degrees, and in total.)

In other reports, NISA has calculated that the core melt events at the three reactors likely produced from 800 to 1000 kilograms of hydrogen at each of the plants. As we've detailed here many times, this hydrogen came from both the metal-water reaction of the zirconium-alloy ("zircaloy" is the trade name) fuel rod clad and from some radiolytic dissociation of water. This is the hydrogen that exploded and caused the damage of the reactor buildings. For comparison purposes, if we convert to standard measure and find that the Fukushima plants developed from 1760 to 2200 pounds of hydrogen each and compare with the something over 700 pounds developed at Three Mile Island 2, it becomes obvious why the reactor buildings were so severely damaged at Fukushima. At TMI, the hydrogen burn caused a pressure pulse (of about 28 psig if I recall) but did no permanent damage; the hydrogen burn was contained entirely inside the reactor containment (which is of an entirely different and probably superior design.) The damage to No. 1 and No. 3 buildings is obvious; damage to No. 4 building was due to hydrogen leaking INTO that building from No. 3 plant's common vent. The hydrogen explosion at No. 2 plant was more contained but damaged the suppression pool or "toroid" below the plant.

Water injection to the reactor cores continues as noted in previous posts. Injection to spent fuel pools continues occasionally, with hydrazine added as TEPCO deems necessary (this is a corrosion inhibitor.) Temperature of No. 3 reactor is climbing slowly, and has been since May 28th.

TEPCO hopes to have its first water decontamination plant operating on or about June 15th at the site. (Pictures of this plant will be up on this site later today.)

As a result of the video of steam release in the No. 1 reactor building many people have commented or e-mailed asking just where this steam was spotted by the robot. The TEPCO map below shows clearly the location of the pipe penetration in the floor. 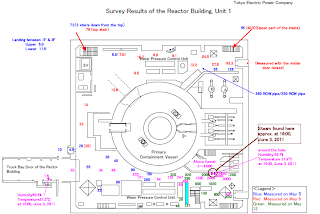 The date of the above illustration is June 4.

As noted previously TEPCO continues to bring a great deal of tank capacity on site, in order to get a leg up on the buildup of water from core injection; this has been occurring over roadways to the site since June 4, according to TEPCO press releases.