The specially shielded CH-47 helicopters are still cycling back and forth with seawater and are dumping it on No. 3 and No. 4 for now.

Eleven water cannon trucks are ready to move in for action.

Some speculation is ongoing still about the scale of the spent fuel pools, so look at this diorama (used here before) that I have just re-marked to indicate details: 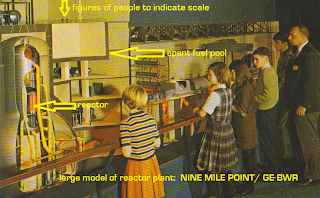 UPDATE 9:25 PM Looks like the helicopters stopped after four drops; each was less effective than the first. The trucks will probably be the way to go, with 4000l of water each. Note: I hope it's borated water.
Posted by Will Davis at 9:16 PM