Let us take just a moment to view official TEPCO photos of the two affected nuclear plant sites in Japan.

Fukushima Daiichi is a site that contains six separate nuclear power plants. Four of them are in one area of the plant, all next to each other, while another pair of nuclear plants is sited a short distance away. Below is Fukushima Daiichi. 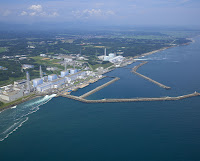 Grouping of nuclear reactor plants together at one site is not uncommon at all. In the United States, grouping of more than two together is unusual but in other countries it is commonly done. Sometimes the construction of multiple plants at one site is considered at the beginning of a project, while at other times further land is acquired and added to a site to enlarge it and increase generating capacity without having to find a new site elsewhere.
Posted by Will Davis at 6:03 PM