Smoke again from Fukushima Daiichi No. 3

Starting at about 4:20 PM Tokyo time, black smoke began coming from Fukushima Daiichi No. 3's reactor building. This appears to be the same as it was the other day. TEPCO evacuated No. 3 and No. 4 plants at that time. It appears that the evacuation of the site was later widened.

At around 5:20 PM Tokyo time (4:20 AM Eastern) a statement was made that the smoke was decreasing. Also, Chief Cabinet Secretary Yukio Edano says that it's still believed that there is water in No. 3 plant's spent fuel pool.

Picture by TEPCO at about 5 PM: 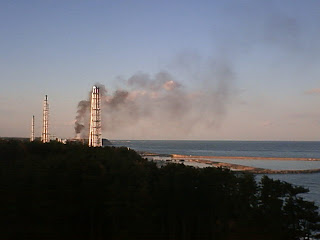