I have a snap of a photo shown on nationwide Japanese television yesterday during a press conference. We can see remains of the upper portions, apparently, of No. 3 and No. 4 plants at the Fukushima Daiichi site. I have seen this photo on a number of Japanese media sources and the plant identifications are the same on each broadcast. I've marked the screenshot:

Now, from this photo it's really hard to figure out just what is being seen. So, I've taken a photo we've seen before on this blog and marked what I think the photographer's location was, the plant numbers you're seeing in the press conference photo and a cone or field of view from the point of the photographer... 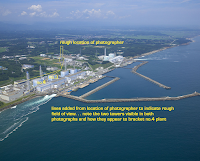 (Both photos, by the way, blow up fairly large when clicked.)

The press conference photo isn't the best, but remember that men are taking risks running down into the plant in radiation areas and areas that have radioactive contamination on the ground, and in the air to snap these photos and then run back to the main gate. The photos are then used in estimates of plant condition and development of responsive action. This is exactly the procedure used at several nuclear accidents over time, including SL-1 and Chernobyl.
Posted by Will Davis at 7:21 AM