Photos of smoke plume yesterday, No. 3 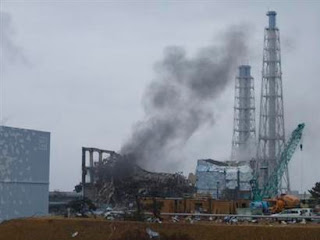 These photos, again, are of the smoke plume that issued from the Fukushima Daiichi No. 3 reactor plant yesterday. The smoke issued for about two hours and then stopped. This was the first of two unexplained issuances that day; the other, not pictured here, was vapor from No. 2.

The other shot, closer, of the smoke coming from No. 3 plant: