Finally, at 9:35 PM Eastern on Friday we have some good solid reporting about all the plants operated by TEPCO at both Fukushima sites.

Next, it appears that emergency generators are in place at both sites covering the bulk of the cooling and I&C needs for the time being.

Third, it looks as if all affected plants are admitting coolant on their steam driven standby injection pumps and are either allowing reliefs to pop or else are manually lifting them occasionally to control primary plant temperature and pressure. This situation seems the same for all plants with differing rates of success, Fukushima Daiichi Plant 1 being the most serious at the moment.

Radiation levels outside the plant limits are tolerable.

Release of steam appears to have been from the secondary containments; wind is directly off shore at last check, and any radioactive gases are dispersed at sea.

Below, you will find a reference picture of a typical GE BWR containment and will see the reactor at center in its pressure vessel. Around this is the drywell, meant to contain any primary leakage or worse should the primary rupture. The large and heavy secondary containment is also clearly labeled. This illustration blows up very large if clicked. From WASH-1250 Final Draft. 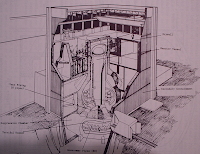 More as the situation evolves, but right now the story seems about as one would expect. However, aftershocks are occurring.

UPDATE 10:45 PM FRIDAY: We have confirmed that the plants affected have been using their condensate water as make-up for the primary plant water inventories. Also, the apparent intermittent primary relieving by the normal methods is causing high pressures in the containments, which is what is being relieved and covered by the news so inaccurately. Wind still out to sea.
Posted by Will Davis at 9:35 PM