Apparently something happened with the latest NISA Seismic Damage Report document, and it's kind of garbled but I can read enough of it to relate the following facts. I'll put the new information in print, and then my words in parenthesis.

Core cooling injection for No. 1 plant increased by use of water line in addition to fire extinguishing line; volume injected increased from 2 cubic meters per hour to 18 cubic meters per hour. (The temperature measured on this plant was quite high, and according to a NISA press conference got as high as 400C .. above what I reported yesterday.. and extra cooling was necessary. This was applied at 2:33 AM Tokyo time March 23.)

Seawater injection to both No. 2 and No. 3 reactor vessels is continuing. (Same reason as for No. 1, exact method unclear since not stated.)

Units No. 5 and No. 6 are now both fully on external power. (This contradicts the report earlier from JAIF, and one wonders if that were simply a translation problem.. more sources are saying that both these plants are off the EDG's than are saying they're still on, so I'm going to guess they're on external AC power.)

Another public release contains a couple of good rad survey maps for the Fukushima Daiichi and Daini sites.
Click to enlarge! 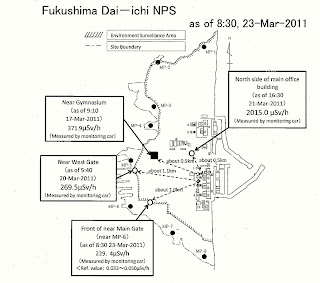 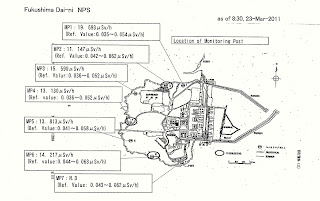 These charts as normal are using microsieverts as the measurement (for those who don't know, the little odd "u" in front of the measurement is the standard figure for "micro.") The conversion to the more familiar term in the west, millirem, is one microsievert equals .1 millirem (mr/hr.)

So we see the maximum reading on these charts anywhere is 2015 microsieverts per hour, which converts to 201.5 mr/hr.

At TMI, readings on site varied from 800 R/hr at the containment dome ( !!!! ) all the way down to 5 to 10 mr/hr variously around the site, 365 mr/hr at the NW site boundary, and 1-5 mr/hr in a wide number of places. A couple days after the accident, some higher readings appeared; two days later a reading of 38 mr/hr NE of the plant was recorded.

Considering the recent findings of Iodine in the water supply in Tokyo, there has been some release from the plants aerosolized and lofted.