Now that all six plants at the Fukushima Daiichi site have been mentioned in some way or another in news items both here on this blog and elsewhere, it may be helpful to give some very basic data.

The spread of years during which they were built is a number of years, and core output and size increased continually during these years so that the last plant built, No. 6, is considerably more powerful than the first, No. 1.

Planned units No. 7 and No. 8 would be Advanced BWR plants, rated at 3926 MWt / 1325 MWe net. No further details are known; exact location at the site for these is not known but clearly there is room between the existing blocks of units as well as north of units 5 and 6.

Here is TEPCO's press photo again, with my markings on it in a new version to indicate features at Fukushima Daiichi. 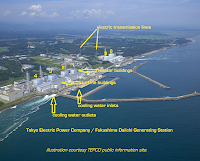