As I continue to follow the progress of the various projects here and abroad to advance nuclear energy, I can't help but wonder if we're all feeling just a tiny bit of the excitement and anticipation that was felt back in the 50's, when the technology was relatively in its infancy. This brings to mind Power Reactor License No. 1, issued by the AEC for GE's Vallecitos Boiling Water Reactor. 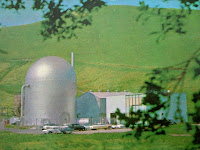 Left, VBWR illustration from AEC photo presentation made to 1958 Geneva Conference entitled "Atoms For Peace / USA 1958." Photo courtesy General Electric. While it's true that the Shippingport Atomic Power Station (a Westinghouse project) was the first nuclear power plant to be designed to provide commercial electric power and then get built and placed on line, GE did in fact beat that plant to the punch with the later but much smaller and simpler VBWR (in those days, all reactors had three or four letter designators, with the Shippingport plant being known as the PWR.)

VBWR was conceived in 1955 as a prototype and dress rehearsal for the much larger project that became Dresden-1, and a new Vallecitos Atomic Laboratory was built near Pleasanton, California. The construction permit from the AEC was received in June 1956, and very rapid construction led to completion one year later. VBWR was a test plant, and so could operate both as a direct-cycle boiling water reactor and as a dual-cycle boiling water reactor (which latter duplicated Dresden as finally built.) During the planning it was decided to actually build an electric generating station to connect to the Pacific Gas & Electric system, and PG&E shared costs and provided a 5000 KW generator salvaged from a ship and modified. Core power of VBWR was designed as 20 MWt but the reactor on test proved capable of developing 30 MWt with no adverse effects. Initial criticality occurred October 17, 1957; on October 24 the plant was placed on the PG&E grid and delivered the full rated 5 MWe. Later AEC documents for siting indicate, for purpose of source term calculation, a core power of 50 MWt. Operation continued through 1963, when the plant was shut down.

Vallecitos remains in SAFSTOR today, although it isn't alone like it was in the photo above. Another reactor was built alongside of it and although originally it was planned to operate in tandem as a superheater plant, eventually the second plant was left on its own.

Here we see, on the left, the original VBWR. In this illustration, an artist has added (from blueprints) on the right the plans for the ESADA VESR reactor. Empire State Atomic Development Associates, a group of seven New York state utilities, was formed to investigate three high-efficiency reactor designs through investment with, and contracts with, major reactor vendors. The VESR, or Vallecitos Experimental Superheat Reactor, was one of these. This was a 12.5 MWt reactor designed to be operated with steam supplied by the VBWR. According to the scant information available, this probably only happened for a short time if at all since the superheat reactor only started up for the first time in November 1963. After that, until the reactor was shut down and the license made 'possession only' in 1970, it operated on its own investigating superheating elements for boiling water reactors. In some early documents this same reactor is referred to as the EVSR or Experimental Vallecitos Superheat Reactor. It's easy to see why this letter system was abandoned.

We all know the result of GE's having built Vallecitos Laboratory; the highly successful Dresden Nuclear Generating Station, and many more (and much more advanced) GE boiling water reactors since.

I hope you've enjoyed this very brief look back in time - and now it's time to move forward!
Posted by Will Davis at 2:15 PM